Information for Healthcare Professionals and Laboratories

CDC has observed an increase in certain Salmonella infections among travelers to or from Mexico. The Salmonella causing these infections are a strain of multidrug-resistant Salmonella serotype Newport. See guidance for diagnosing and treating patients known or suspected to have an infection with this strain of Salmonella.

All About Salmonella with Dr. Ian Plumb

CDC estimates that approximately 1.35 million illnesses and 420 deaths occur due to non-typhoidal Salmonella annually in the United States1.

FoodNet reports that the annual incidence of Salmonella infection in the United States was 15.2 illnesses per 100,000 individuals2.

In 2012, 831 foodborne outbreaks were reported to CDC6. They were caused by a variety of pathogens, and 106 of them were confirmed Salmonella. Salmonella accounted for the most hospitalizations (64%) in outbreaks with a confirmed cause6. In the largest recent outbreak, between March 2013 and July 2014, over 600 individuals in 29 states and Puerto Rico were infected with seven outbreak strains of Salmonella Heidelberg7. This outbreak was associated with one brand of chicken, that led to a company recall of over 40,000 pounds of chicken products8, and ended after the company instituted new control measures to reduce contamination.

Salmonella was discovered more than a century ago. Salmonellosis, the illness caused by Salmonella, primarily results in a mild to severe diarrheal illness, known as acute gastroenteritis.

Symptoms of acute gastroenteritis due to infection with Salmonella can include9:

Enteric: an infection of the gastrointestinal tract

Extra-intestinal: an infection occurring outside the intestine

Gastroenteritis: inflammation of the stomach and large and small intestines that may result in vomiting or diarrhea

Invasive infection: an infection of the bloodstream, bone, joint, brain, or nervous system

Diarrhea may last for several days and lead to potentially severe dehydration, especially in infants and children under 2 years old and in adults over 65 years old. Even after clinical symptoms are no longer obvious, Salmonella bacteria may be found in the stool for several weeks.

Most people with diarrhea due to a Salmonella infection recover completely, although it may be several months before their bowel habits are entirely normal.

Sometimes, Salmonella infection can spread to urine, blood, bones, joints, the brain, or the nervous system, causing symptoms related to that body part or system. Some of these extra-intestinal infections can have long-term effects, depending on which part of the body is infected.

When Salmonella infections become invasive, they can affect the bloodstream, bone, joint, brain, or nervous system, or other internal organs.

How is Salmonella infection treated?

Giving fluids is very important. Oral fluids are usually sufficient, but people with severe diarrhea may require intravenous (IV) fluids. Most people do not require antibiotics.

Should Salmonella infections be treated with antibiotics? 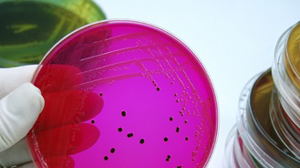 Antibiotics are NOT recommended for treating most patients with Salmonella infection.

Antibiotics are recommended for

In healthy people with Salmonella infection, antibiotics generally do not shorten the duration of illness, diarrhea, or fever. The main risks of treatment include adverse effects of the antibiotic, the possibility of prolonged asymptomatic Salmonella carriage, and disturbance of the microbiome. Unnecessary antibiotic use also contributes to antibiotic resistance.

The germs that contaminate food can be resistant because of the use of antibiotics in people and in food animals. We can prevent many of these infections with careful antibiotic use and by keeping Salmonella out of the food we eat.

What should I know about treating patients with resistant Salmonella infections?

If Salmonella bacteria are resistant, first-choice antibiotics recommended to treat these infections might not work. Healthcare providers might need to prescribe second- or third-choice drugs, but these might be less effective, administered through an IV instead of orally, more toxic, and more expensive. Recommended antibiotics for severe infections include fluoroquinolones, azithromycin, and third generation cephalosporins.

CDC tracks these infections through the National Antimicrobial Resistance Monitoring System (NARMS). The NARMS program at CDC helps protect public health by providing information about emerging bacterial resistance, the ways in which resistance is spread, and how resistant infections differ from susceptible infections.

Learn more about resistant Salmonella with these resources from NARMS.

Serotype: groups in a single species of microorganisms, such as bacteria or viruses, which share distinctive surface chemical structures

The most common serotypes of Salmonella that cause human infection are Enteritidis, Typhimurium, Newport, and Javiana. These Salmonella serotypes account for about half of culture-confirmed Salmonella isolates reported by public health laboratories12.

Salmonella bacteria are classified as either “typhoidal” or “nontyphoidal,” based on their serotype.

How do People Get Salmonella?

Salmonella live in the intestinal tracts of humans and animals. You can get Salmonella infection from a variety of sources, including:

A person who is in close contact with, or in an area where animals live and roam, can get germs on their hands— even if they do not directly touch an animal.

Salmonella is usually transmitted to humans by eating foods contaminated with small amounts of animal feces. Contaminated foods usually look and smell normal. They are often foods of animal origin, such as beef, poultry, milk, fish, or eggs, but any food, including vegetables and fruit or processed foods, may become contaminated.

Salmonella live in the intestinal tracts of humans and other animals, including poultry and other birds, amphibians, and reptiles. Salmonella may be found in the feces of some animals, and people can become infected if they do not wash their hands after contact with animals or animal feces.

Many animals can carry Salmonella germs but appear perfectly healthy and clean. Animals’ bodies, whether covered with fur, feathers, or scales, can be contaminated with germs. Reptiles, such as turtles, lizards, and snakes, are particularly likely to harbor Salmonella. Many chicks, ducks, and other poultry including those in backyard flocks can carry Salmonella in their feces. You cannot look at an animal and tell if it is infected with Salmonella.

The area where an animal lives, such as its cage or water in its tank or the places where an animal roams, may be contaminated with Salmonella, which can cause illness in people who come into direct contact with the animal area, cage, or tank water. Learn more about CDC’s Healthy Pets Healthy People initiative.

An Atlas of Salmonella in the United States, 1968-2011 [PDF – 248 pages] summarizes 42 years of surveillance data on laboratory-confirmed Salmonella isolates from humans. The Atlas includes:

This is the first time CDC has posted these data online in a downloadable format. You can download the report in its entirety or in 32 individual Salmonella serotype reports.

CDC has several surveillance systems for obtaining information about Salmonella. They serve different purposes and provide information on various features of the organism’s epidemiology, such as number of outbreaks, antimicrobial-resistant infections, and subtypes.