This outbreak appears to be over. However, Salmonella is an important cause of human illness in the United States. More information about Salmonella, and steps people can take to reduce their risk of infection, can be found on the CDC Salmonella Web Page. 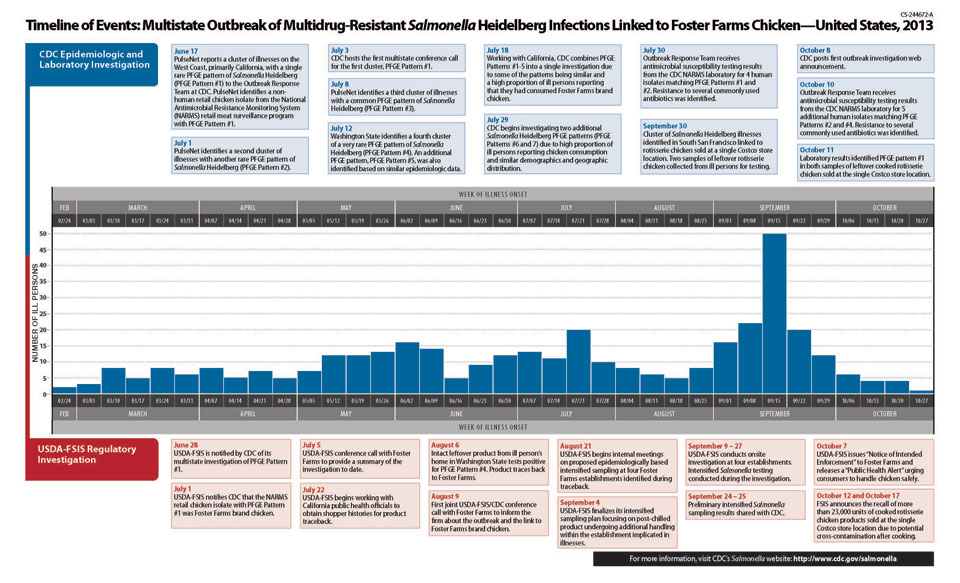 June 28, 2013: USDA-FSIS is notified by CDC of its multistate investigation of PFGE Pattern #1.

July 5, 2013: USDA-FSIS conference call with Foster Farms to provide a summary of the investigation to date.

July 18, 2013: Working with California, CDC combines PFGE Patterns #1-5 into a single investigation due to some of the patterns being similar and a high proportion of ill persons reporting that they had consumed Foster Farms brand chicken.

August 9, 2013: First joint USDA-FSIS/CDC conference call with Foster Farms to inform the firm about the outbreak and the link to Foster Farms brand chicken.

October 12 and October 17, 2013: FSIS announces the recall of more than 23,000 units of cooked rotisserie chicken products sold at the single Costco store location due to potential cross-contamination after cooking.