This outbreak appears to be over, but recalled frozen tuna may still be in freezers. People could get sick if restaurants and retailers who are unaware of the recall continue to serve and sell sushi made with recalled frozen tuna. Check the U.S. Food and Drug Administration website for the list of recalled productsexternal icon. 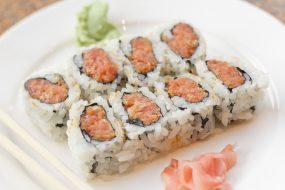 Restaurants and retailers should not sell or serve recalled frozen, ground tuna from Jensen Tuna.

Public health investigators used the PulseNet system to identify illnesses that may have been part of this outbreak. PulseNet is the national subtyping network of public health and food regulatory agency laboratories coordinated by CDC. DNA fingerprinting is performed on Salmonella bacteria isolated from ill people by using techniques called pulsed-field gel electrophoresis (PFGE) and whole genome sequencing (WGS). CDC PulseNet manages a national database of these DNA fingerprints to identify possible outbreaks. WGS gives a more detailed DNA fingerprint than PFGE. WGS performed on bacteria isolated from ill people showed that they were closely related genetically. This means that ill people in this outbreak were more likely to share a common source of infection.

As of May 20, 2019, 15 people infected with the outbreak strain of Salmonella Newport were reported from eight states. A list of the states and the number of cases in each is on the Map of Reported Cases page.

Epidemiologic and traceback evidence indicated that frozen, raw ground tuna supplied by Jensen Tuna Inc. in Houma, La., was the likely source of this outbreak.

In interviews, ill people answered questions about the foods they ate and other exposures in the week before they became ill. Nine (75%) of 12 people interviewed reported eating sushi from a restaurant or grocery store. This proportion was significantly higher than results from a survey pdf icon[PDF – 787 KB] of healthy people in which 5% reported eating sushi, sashimi, or ceviche made with raw fish or shellfish in the week before they were interviewed. Of the nine people with information about their sushi exposure, all nine (100%) reported eating a sushi item containing raw tuna or raw “spicy tuna.”

The FDA and regulatory officials in several states traced the source of the raw tuna used by restaurants where ill people ate sushi. The traceback evidence indicated that the restaurants used frozen ground tuna supplied by Jensen Tuna.