CDC has been collaborating with public health officials in many states and the U.S. Food and Drug Administration (FDA) to investigate a multistate outbreak of Salmonella serotype Newport infections linked to the consumption of raw alfalfa sprouts. Investigators used DNA analysis of Salmonella bacteria obtained through diagnostic testing to identify cases of illness that may be part of this outbreak.

The outbreak can be visually described with a chart showing the number of people who became ill each day. This chart is called an epidemic curve or epi curve. Illnesses that occurred after June 11, 2010, might not yet be reported due to the time it takes between when a person becomes ill and when the illness is reported. This takes an average of 2 to 3 weeks. For more details, please see the Timeline for Reporting Cases of Salmonella Infection.

Collaborative investigative efforts of many local, state, and federal public health, agriculture, and regulatory agencies have linked this outbreak to eating raw alfalfa sprouts. Interviews of case-patients found that most reported eating raw alfalfa sprouts before becoming ill. Some case-patients reported eating sprouts at restaurants; others purchased sprouts at grocery stores. The initial investigation traced the implicated raw alfalfa sprouts to a single sprout processor in California. Investigations were conducted at the sprout processor.

Persons infected with the outbreak strain of Salmonella Newport, by state, as of June 24, 2010 (n=44) 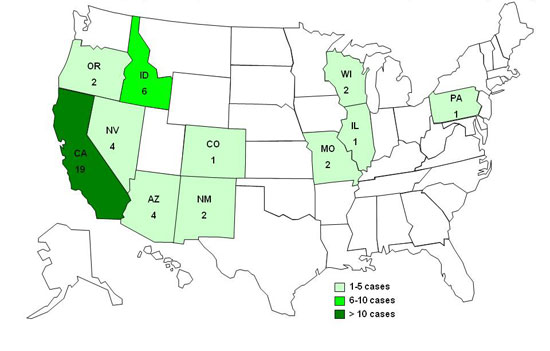 Persons infected with the outbreak strain of Salmonella Newport, by date of illness onset* 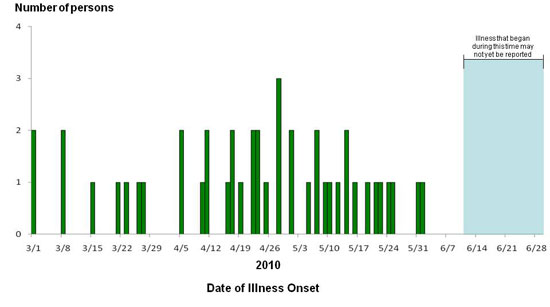 *n=44 for whom information was reported as of June 24, 2010. Some illness onset dates have been estimated from other reported information.