CDC has been collaborating with public health officials in many states, the U.S. Department of Agriculture’s Food Safety and Inspection Service (FSIS), the U.S. Food and Drug Administration (FDA), and the State of Rhode Island to investigate a multistate outbreak of Salmonella serotype Montevideo infections. Investigators are using DNA analysis of Salmonella bacteria obtained through diagnostic testing to identify cases of illness that may be part of this outbreak.

Salmonella Senftenberg, a different serotype of Salmonella, has been found in food samples from retail and a patient household during this outbreak investigation. PulseNet identified 11 persons who had illness caused by Salmonella Senftenberg with matching PFGE patterns between July 1, 2009 and April 28, 2010. Public health officials have interviewed 9 of the 11 ill persons with this strain of Salmonella Senftenberg and determined that two purchased a recalled salami product during the week before their illness began. These 11 cases are not included in the overall case count reported above.

Among the persons with reported dates available, illnesses began between July 4, 2009 and April 14, 2010. Infected individuals range in age from 1 year old to 93 years old and the median age is 37 years. Fifty-three percent of patients are male. Among the 203 patients with available information, 52 (26%) were hospitalized. No deaths have been reported.

The outbreak can be visually described with a chart showing the number of persons who became ill each day. This chart is called an epidemic curve or epi curve. Illnesses that occurred after April 9, 2010 might not yet be reported due to the time it takes between when a person becomes ill and when the illness is reported. This takes an average of 2 to 3 weeks. Please see the Timeline for Reporting Cases of Salmonella Infection.

The numbers of new cases have declined substantially since the peak in November 2009, and this outbreak strain of Salmonella Montevideo appears to have returned to the expected baseline of approximately 3 to 4 cases reported per month. Illnesses may still be reported among people who ate recalled products since some of the recalled products have long shelf-lives and could continue to cause illness if consumed. Consumers should avoid eating recalled products.

During January 16-21, 2010, CDC and public health officials in multiple states conducted an epidemiologic study by comparing foods eaten by 41 ill and 41 well persons. Preliminary analysis of this study has suggested salami as a possible source of illness. Ill persons (58%) were significantly more likely than well persons (16%) to report eating salami. Additionally, 16 ill persons have been identified who purchased the same type of sliced salami variety pack at different grocery store locations before becoming ill; three additional ill persons have been identified who purchased a similar type of sliced salami deli tray before becoming ill. These variety packs and deli trays all included salamis made with black pepper, which was added after the lethality step. These data suggest this product is the source of some of these illnesses. This sliced salami variety pack and sliced salami deli tray were recalled by Daniele International Inc. CDC and public health officials in multiple states interviewed ill persons to ask them about the foods they ate during the week before they became ill as well as to collect shopper card information.

FSIS has issued several news releases announcing Daniele International Inc. recalled products. News releases were issued on January 23, 2010 (initial recall), January 31st (expanded recall), February 4th (updated information of January 23rd recall), and February 16th (expanded recall). Many of these products can have an extended shelf life of up to one year. These products were distributed to retail establishments nationwide.

Testing by the Rhode Island Department of Public Health found the outbreak strain of Salmonella Montevideo in samples of black and red pepper intended for use in the production of Italian-style meats at Daniele International Inc. Since then, several recalls have been issued.

On February 25, 2010, Wholesome Spice, Brooklyn, New York, announced a recall of 25 pound boxes of crushed red pepper sold between April 6, 2009 and January 20, 2010. Wholesome Spice sells spices directly to commercial customers, who may have incorporated them into their own products.

On March 5, 2010, Mincing Overseas Spice Company of Dayton, New Jersey, voluntarily recalled two lots of black pepper due to possible Salmonella contamination. Black pepper was not distributed at retail level and was shipped to FL, IA, IL, IN, MA, OK, NJ, NY, PA, RI, TX, and WI. Customers who purchased black pepper from any parts of Lots 3258 and 3309 should place these lots or any spice blends made from these lots under their control on hold and contact Mincing Overseas Spice Company.

To date, there have been 11 additional company recalls associated with Minicing Overseas Spice and Wholesome Spice Companies. Consumers are advised to review FDA’s recall site for the latest information on recalled products containing black or red pepper.

Laboratory Testing of Products and Ingredients

The recall was expanded as a result of a confirmed finding of Salmonella in an unopened salami product reported by the Illinois Department of Public Health. The product was sampled during the course of an ongoing investigation of a multistate outbreak of Salmonella Montevideo illnesses. The product tested was not included in the previous recall issued January 23, 2010, but is a similar type of product bought by customers who later became sick and were identified as part of the Salmonella Montevideo investigation. Subsequent testing revealed that the product contained the Salmonella Senftenberg strain. The company believes that black pepper is a possible source of Salmonella contamination.

On January 28, the Rhode Island Department of Health announcedExternal that test results revealed that an opened container of black pepper used in the manufacturing of at least some of the recalled products was positive for Salmonella Montevideo and that the DNA fingerprint matched the outbreak strain.

Based on epidemiologic information, FSIS collected Panino products for testing. On February 16, Salame Panino products, which contain crushed red pepper, tested positive for Salmonella. The samples were subsequently confirmed as Salmonella Montevideo with the outbreak PFGE pattern. This finding identified crushed red pepper as another source of contamination at Daniele.

On February 17, results from laboratory testing of product from Illinois revealed that the product contained the Salmonella Senftenberg strain.

On February 25, the FDA released additional informationExternal about its investigation of supply chains of both black and red pepper used in the manufacturing of the recalled Italian style meat products. The Agency has collected and is analyzing 153 composite pepper samples, which represent more than 4,000 individual samples of black and red pepper. Samples from two lots of crushed red pepper collected from Daniele International Inc. have tested positive for positive for the same strain of Salmonella Montevideo associated with the outbreak.

CDC and its public health partners are continuing the epidemiologic investigation to verify that the outbreak is controlled. CDC, USDA-FSIS, and FDA continue to work closely to identify the specific products or ingredients that became contaminated and how the contamination occurred and to identify any other food vehicles that may be involved.

Unique Features of this Outbreak Investigation

Most persons infected with Salmonella develop diarrhea, fever, and abdominal cramps 12-72 hours after infection. Infection is usually diagnosed by culture of a stool sample. The illness usually lasts from 4 to 7 days. Although most people recover without treatment, severe infections may occur. Infants, elderly persons, and those with weakened immune systems are more likely than others to develop severe illness. When severe infection occurs, Salmonella may spread from the intestines to the bloodstream and then to other body sites and can cause death unless the person is treated promptly with antibiotics.

Persons infected with the outbreak strain of Salmonella Montevideo, by state, as of April 28, 2010 (n=272) 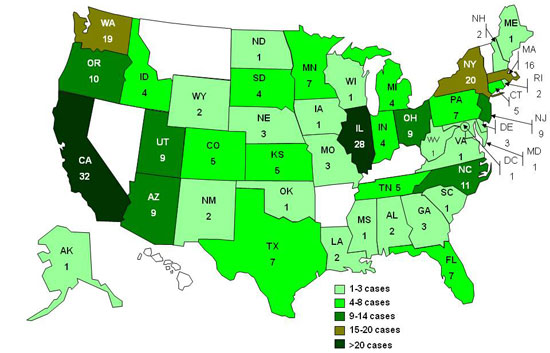 Persons infected with the outbreak strain of Salmonella Montevideo, by week of illness onset* 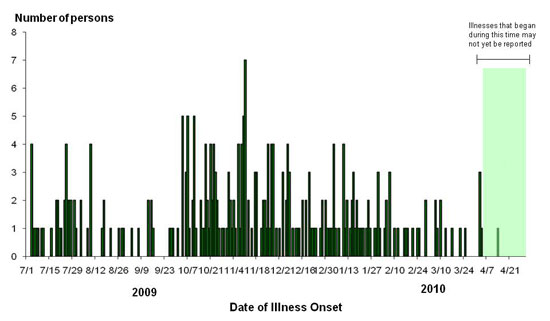 *n=272 for whom information was available as of April 28, 2010. Some illness onset dates have been estimated from other reported information.