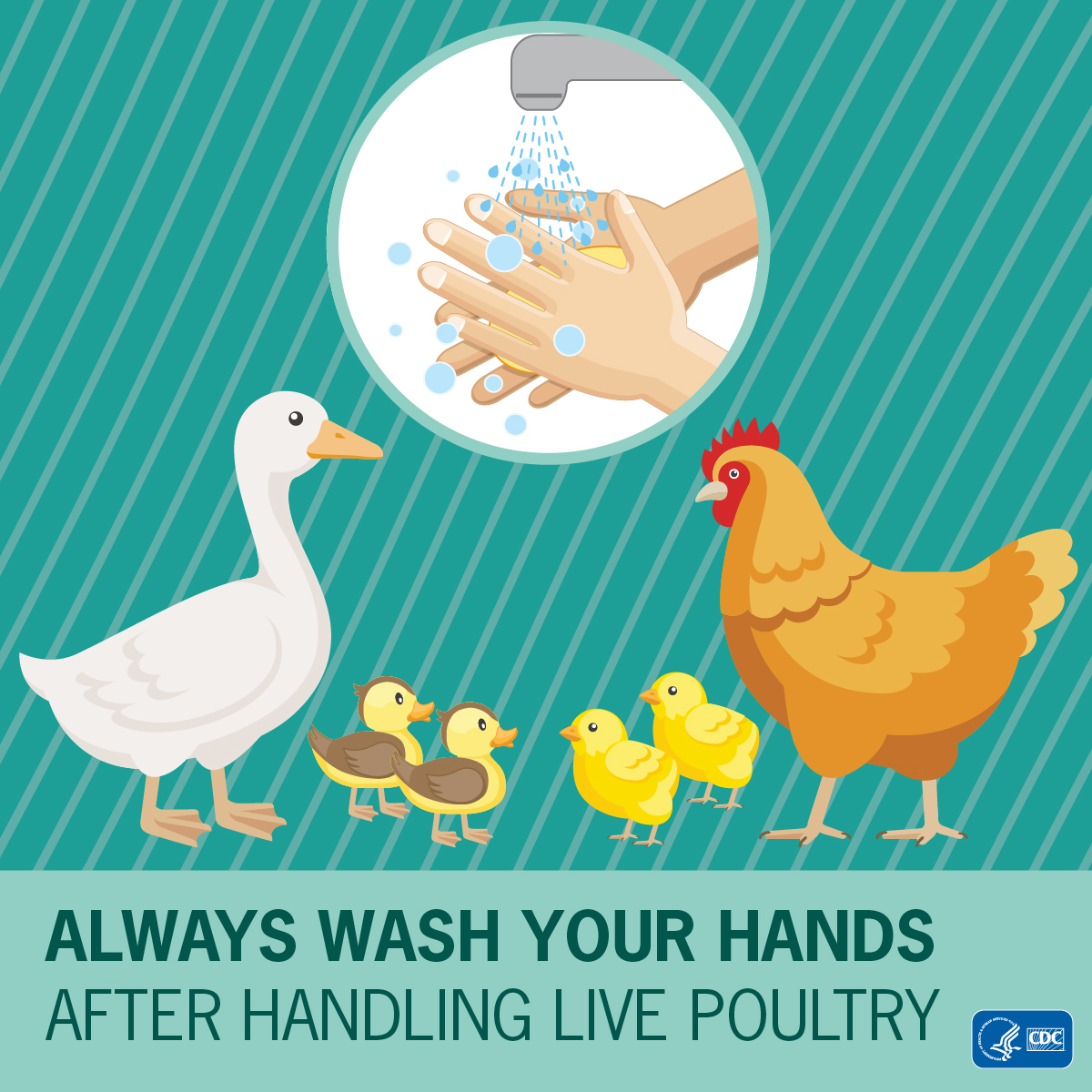 Backyard poultry can carry Salmonella bacteria even if they look healthy and clean and show no signs of illness. You can get sick with a Salmonella infection from touching backyard poultry or their environment. Follow these tips to stay healthy with your backyard flock, even if there is not an ongoing outbreak:

Be safe around poultry.

Advice to Stores That Sell or Display Poultry

In 2020, CDC and public health officials in all 50 states investigated 17 multistate outbreaks of Salmonella infections linked to backyard poultry.

As of December 17, 2020, a total of 1,722 people infected with one of the outbreak strains of Salmonella were reported from all 50 states. A list of the states and the number of cases in each is on the Map of Reported Cases page.

If antibiotics were needed, some infections related to these outbreaks may have been difficult to treat with some commonly recommended antibiotics and may have required a different antibiotic choice. Whole genome sequencing performed on Salmonella bacteria isolated from 1,641 ill people and two environmental samples showed predicted antibiotic resistance to one or more of the following antibiotics for 848 isolates:

There was no antibiotic resistance predicted for 795 (48.4%) isolates. Testing of 13 outbreak isolates using standard antibiotic susceptibility testing by CDC’s National Antimicrobial Resistance Monitoring System (NARMS) laboratory showed resistance to streptomycin and tetracycline in 3 isolates and no resistance in 10 isolates (fosfomycin and kanamycin were not tested by this method).

Investigation of the Outbreaks

Epidemiologic and laboratory evidence showed that contact with backyard poultry (such as chicks and ducklings) was the likely source of these outbreaks.

In interviews, ill people answered questions about animal contact and other exposures in the week before they became ill. Of 876 people interviewed, 576 (66%) reported contact with chicks and ducklings before becoming ill.

Testing of backyard poultry and their environments (such as backyard coops) in Kentucky and Oregon found three of the outbreak strains.

Ill people reported buying poultry from many sources, including agricultural stores, websites, and hatcheries. No single store chain or hatchery could account for all of the illnesses.

Regardless of where backyard poultry are purchased, they can carry Salmonella germs that can make people sick. Backyard poultry owners should always follow steps to stay healthy around their flocks.

As of December 17, 2020, this outbreak investigation is over. CDC will continue to work with partners to prevent Salmonella infections linked to contact with backyard poultry.