CDC is collaborating with public health officials in many states and the U.S. Food and Drug Administration (FDA) to investigate a multistate outbreak of Salmonella Enteritidis infections linked to alfalfa sprouts and spicy sprouts. There is no connection between this Salmonella outbreak and the European E. coli O104:H4 outbreak. Investigators are using DNA analysis of Salmonella bacteria obtained through diagnostic testing to identify cases of illness that may be part of this outbreak.

As of July 5, 2011, a total of 25 persons with the outbreak strain of Salmonella Enteritidis have been reported from 5 states: Idaho (3), Montana (10), New Jersey (1), North Dakota (1) and Washington (10). Among persons for whom information is available, illnesses began between April 12 and June 15, 2011. Ill persons range in age from 12 years to 77 years old, with a median age of 35 years old. Seventy-six percent are female. Among the 10 ill persons with available information, 3 (30%) were hospitalized. No deaths have been reported.

The outbreak can be visually described with a chart showing the number of people who became ill each day. This chart is called an epidemic curve or epi curve. Illnesses that occurred after June 15, 2011 might not be reported yet due to the time it takes between when a person becomes ill and when the illness is reported. This takes an average of 2 to 3 weeks. Please see the Timeline for Reporting Cases of Salmonella Infection for more details.

Collaborative investigative efforts of local, state and federal public health and regulatory agencies have linked this outbreak to Evergreen Fresh Sprouts, LLC Alfalfa Sprouts and Spicy Sprouts. The recalled alfalfa sprouts and spicy sprouts were distributed in Washington and Idaho by direct delivery to four distributors and three retail stores. CDC, FDA and state and local public health partners are continuing surveillance to identify new cases and trace potentially contaminated products. CDC will continue to update the public on the progress of this investigation as information becomes available.

Most persons infected with Salmonella bacteria develop diarrhea, fever and abdominal cramps 12 to 72 hours after infection. The illness usually lasts 4 to 7 days, and most persons recover without treatment. However, in some persons, the diarrhea may be so severe that the patient needs to be hospitalized. Salmonella infection may spread from the intestines to the bloodstream, and then to other body sites and can cause death unless the person is treated promptly with antibiotics. The elderly, infants and those with impaired immune systems are more likely to have a severe illness from Salmonella infection.

Since 1996, there have been at least 30 reported outbreaks of foodborne illness associated with different types of raw and lightly cooked sprouts. Most of these outbreaks were caused by Salmonella and E. coli infections.

On July 1, 2011, Evergreen Fresh Sprouts, LLC of Moyie Springs, Idaho announced a recall of specific lots of alfalfa sprouts and spicy sproutsExternal because these products have the potential to be contaminated with Salmonella. The products were distributed in Washington and Idaho by direct delivery to four distributors and three retail stores and could have ended up in restaurants and supermarkets in those areas and neighboring states.

Advice to Consumers and People Who Sell or Serve Food

Persons infected with the outbreak strain of Salmonella Enteritidis, by state, as of July 5, 2011 (n=25) 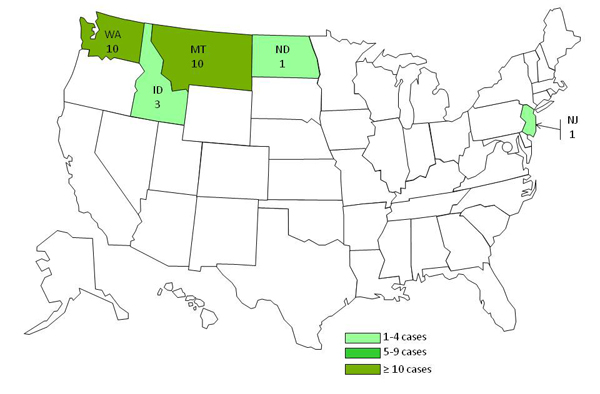 Persons infected with the outbreak strain of Salmonella Enteritidis, by date of illness onset* 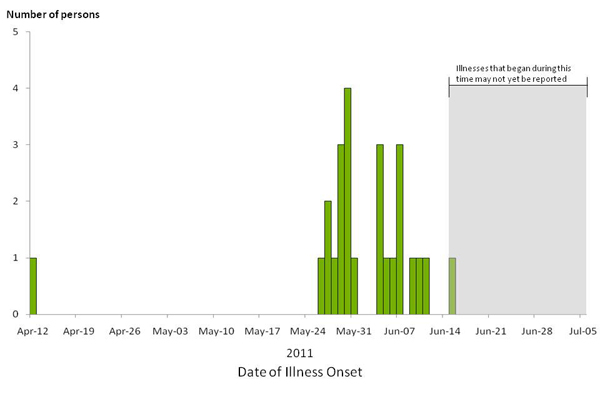 *n=25 for whom information was reported as of July 5, 2011. Onset data not currently available for all persons with reported illness.