This outbreak appears to be over. Recalled peaches should no longer be available in stores. Always choose and handle fruit safely to help prevent foodborne illness. Wash hands and food preparation surfaces before and after handling fruit. 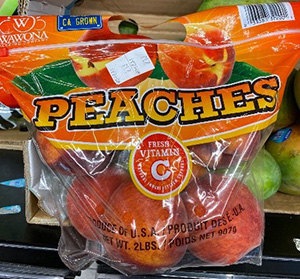 A total of 101 people infected with the outbreak strain of Salmonella Enteritidis were reported from 17 states. A list of the states and the number of cases in each can be found on the Map of Reported Cases page.

Illnesses started on dates ranging from June 29, 2020, to August 27, 2020. Ill people ranged in age from 1 to 92 years, with a median age of 43. Sixty-four percent of ill people were female. Of 90 ill people with available information, 28 hospitalizations were reported. No deaths were reported.

Whole genome sequencing analysis showed that an outbreak of Salmonella Enteritidis infections in Canada was related genetically to this outbreak in the United States. This means that people in both outbreaks were likely to share a common source of infection.

Epidemiologic and traceback evidence indicated that peaches packed or supplied by Prima Wawona or Wawona Packing Company were the likely source of this outbreak.

On August 22, 2020, Prima Wawona recalledexternal icon bagged and bulk, or loose, peaches that they supplied to retailers nationwide. See FDA’s noticeexternal icon for a list of recalled products. Recalled products are past their shelf life and should no longer be available in stores.