CDC collaborated with public health officials in a number of states, including California, Maryland, Oregon, and Washington, and the U.S. Food and Drug Administration (FDA) to investigate and to identify the likely source of this multistate outbreak of Salmonella Panama infections. Investigators used DNA analysis of Salmonella bacteria obtained through diagnostic testing to identify cases of illness that may be part of this outbreak.

As of June 20, 2011, a total of 20 ill people infected with the outbreak strain of Salmonella Panama have been reported from Arizona (1), California (2), Colorado (1), Maryland (1), Montana (1), Nevada (1), Oregon (6), Pennsylvania (1), Utah (1) and Washington (5). Ill people range in age from less than 1 year old to 68 years old, with a median age of 13 years old. Sixty-five percent are male. Among those ill, three have been hospitalized and no deaths have been reported. There have been no new case reports since April 22, 2011. This outbreak appears to be over.

The outbreak can be visually described with a chart showing the number of people who became ill each day. This chart is called an epi curve. Illnesses that occurred after May 16, 2011, might not be reported yet due to the time it takes between when a person becomes ill and when the illness is reported. This takes an average of 2 to 3 weeks. Please see the Timeline for Reporting Cases of Salmonella Infection for more details.

Collaborative investigative efforts of state, local and federal public health and regulatory agencies linked this outbreak to eating cantaloupe. Twelve of 16 ill people reported eating cantaloupe in the week before illness. Eleven of these 12 ill people ate cantaloupes purchased at eight different locations of a national warehouse club. Information gathered with patient permission from membership card records helped determine that ill persons purchased cantaloupes sourced from a single farm. Product traceback information indicated these cantaloupes were harvested from single farm in Guatemala. FDA worked closely with CDC, authorities in states where illnesses have occurred and the firms involved to investigate the source of the contamination and to identify the likely source of this outbreak.

Most people infected with Salmonella bacteria develop diarrhea, fever and abdominal cramps 12 to 72 hours after infection. The illness usually lasts 4 to 7 days, and most people recover without treatment. However, in some people, the diarrhea may be so severe that the patient needs to be hospitalized. Salmonella infection may spread from the intestines to the bloodstream, and then to other body sites and can cause death unless the person is treated promptly with antibiotics. The elderly, infants and those with impaired immune systems are more likely to have a severe illness from Salmonella infection.

Consumers and food preparers should wash their hands before and after handling any melon. Wash the surface of melons such as cantaloupes, and dry them with a clean cloth or paper towel before cutting. Promptly refrigerate cut cantaloupe.

CDC leads federal efforts to gather data on foodborne illnesses, investigate foodborne illnesses and outbreaks, and monitor the effectiveness of prevention and control efforts. CDC is not a food safety regulatory agency but works closely with the food safety regulatory agencies, in particular, with the U.S. Food and Drug Administration and USDA-FSIS. CDC also plays a key role in building state and local health department epidemiology, laboratory, and environmental health capacity to support foodborne disease surveillance and outbreak response. Notably, CDC data can be used to help document the effectiveness of regulatory interventions.

Persons infected with the outbreak strain of Salmonella Panama, by state, as of June 20, 2011 (n=20) 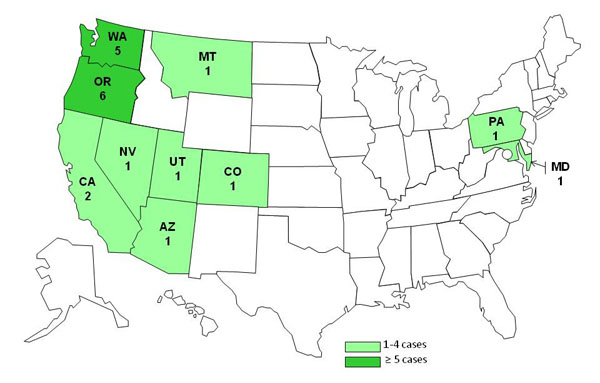 Persons infected with the outbreak strain of Salmonella Panama, by date of illness onset* 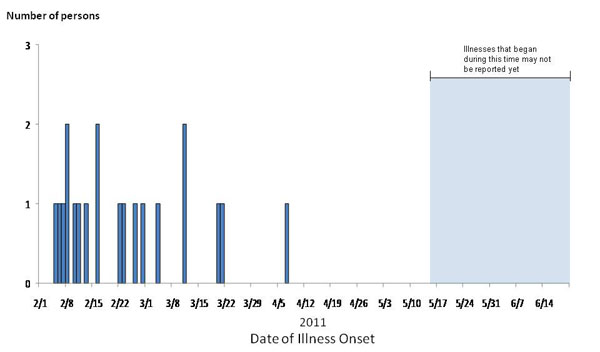 *n=20 for whom information was reported as of June 20, 2011. Onset data not currently available for all persons with reported illness.