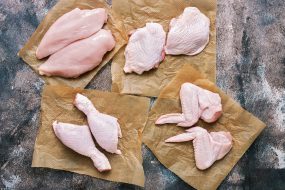 Always handle raw chicken carefully and cook it thoroughly to prevent food poisoning. This outbreak was a reminder that raw chicken products can have germs that spread around food preparation areas and can make you sick.

CDC, public health and regulatory officials in several states, and the U.S. Department of Agriculture’s Food Safety and Inspection Service (USDA-FSIS)External investigated a multistate outbreak of Salmonella I 4,[5],12:i:- infections linked to kosher chicken.

Public health investigators used the PulseNet system to identify illnesses that were part of this outbreak. PulseNet is the national subtyping network of public health and food regulatory agency laboratories coordinated by CDC. DNA fingerprinting was performed on Salmonella bacteria isolated from ill people by using techniques called pulsed-field gel electrophoresis (PFGE) and whole genome sequencing (WGS). CDC PulseNet manages a national database of these DNA fingerprints to identify possible outbreaks. WGS gives a more detailed DNA fingerprint than PFGE. WGS performed on Salmonella bacteria from ill people in this outbreak showed that these Salmonella strains are closely related genetically. This means that the ill people were more likely to share a common source of infection.

As of December 4, 2018, a total of 25 people infected with the outbreak strain of Salmonella I 4,[5],12:i:- were reported from six states. A list of the states and the number of cases in each can be found on the Map of Reported Cases page.

Illnesses started on dates from September 25, 2017, to August 13, 2018. Ill people ranged in age from less than one year to 76, with a median age of 16. Fifty percent of ill people are female. Of 22 people with information available, 11 (50%) were hospitalized, including a death reported from New York.

In interviews, ill people answered questions about the foods they ate and other exposures in the week before they became ill. Of 20 people interviewed, 20 (100%) reported eating chicken products. Of 12 people who reported brand information, 10 (83%) reported specifically eating Empire Kosher brand chicken.

Available data indicated that some kosher chicken products were contaminated with this strain of Salmonella I 4,[5],12:i:- and made people sick. Consumers should always follow steps to prevent Salmonella infection from these products.

As of December 7, 2018, this outbreak investigation is over.