CDC and public health officials in many states investigated 13 multistate outbreaks of Salmonella infections linked to contact with backyard poultry. These outbreak investigations are over.

Backyard poultry can carry Salmonella germs that can make people sick, even when the birds look healthy and clean. Backyard flock owners should always follow steps to stay healthy around their poultry. 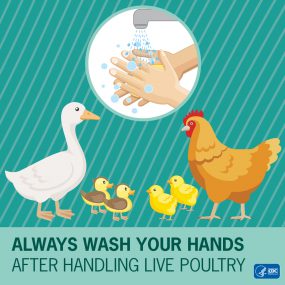 People can get sick with Salmonella infections from touching backyard poultry and the places where they live and roam. Backyard poultry can carry Salmonella germs but look healthy and clean and show no signs of illness.

Advice to Stores and Hatcheries

Public health investigators used the PulseNet system to identify illnesses that were part of these outbreaks. PulseNet is the national subtyping network of public health and food regulatory agency laboratories coordinated by CDC. DNA fingerprinting is performed on Salmonella bacteria isolated from ill people by using a standardized laboratory and data analysis method called whole genome sequencing (WGS). CDC PulseNet manages a national database of these sequences that are used to identify possible outbreaks. WGS gives investigators detailed information about the bacteria causing illness. In these outbreaks, WGS showed that bacteria isolated from ill people were closely related genetically. This means that people in these outbreaks were more likely to share a common source of infection.

A total of 1,134 people infected with the outbreak strains of Salmonella were reported from 49 states and the District of Columbia. A list of the states and the number of cases in each is on the map of reported cases page.

Whole genome sequencing (WGS) was conducted to identify any predicted antibiotic resistance in 814 isolates from  ill people and 38 isolates from food, animals, or the environment. A total of 187 isolates had predicted antibiotic resistance or decreased susceptibility to one or more of the following antibiotics: amoxicillin-clavulanic acid (5% of 187 isolates), ampicillin (6%), cefoxitin (5%), ceftriaxone (5%), chloramphenicol (4%), ciprofloxacin (<1%), fosfomycin (7%), gentamicin (2%), kanamycin (1%), nalidixic acid (<1%), streptomycin (6%), sulfamethoxazole (6%), tetracycline (4%), and trimethoprim-sulfamethoxazole (<1%). There was no antibiotic resistance predicted for 665 (78%) isolates. Testing of 52 clinical isolates using standard antibiotic susceptibility testing methods by CDC’s National Antimicrobial Resistance Monitoring System (NARMS) laboratory provided comparable results (fosfomycin and kanamycin were not tested by this method). If antibiotics are needed, some infections related to these outbreaks may be difficult to treat with some commonly recommended antibiotics and may require a different antibiotic choice.

In interviews, ill people answered questions about animal contact in the week before they became ill. Of 619 people interviewed, 392 (63%) reported contact with backyard poultry before becoming ill. Ill people reported buying poultry from various sources, including agricultural stores, websites, and hatcheries. Six of the outbreak strains that made people sick were identified in samples collected from poultry.

As of October 22, 2019, these outbreak investigations are over.