This outbreak appears to be over. Consumers no longer need to avoid eating Cavi brand whole papayas imported from Mexico. Always choose and handle fruit safely to help prevent foodborne illness. Wash hands and food preparation surfaces before and after handling fruit. 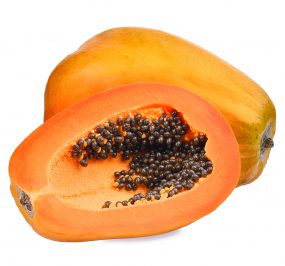 A total of 81 people infected with the outbreak strain of Salmonella Uganda were reported from nine states. A list of the states and the number of cases in each is on the Map of Reported Cases page.

Illnesses started on dates ranging from January 14, 2019, to July 16, 2019. Most illnesses occurred since April 2019. Ill people ranged in age from less than one year to 90 years, with a median age of 62. Of ill people, 54% were female. Of 51 people with available information, 27 (53%) were hospitalized. No deaths attributed to Salmonella were reported. Of 48 ill people with available information, 31 (65%) were of Hispanic ethnicity.

Epidemiologic and traceback evidence indicates that Cavi brand whole, fresh papayas imported from Mexico were the likely source of this outbreak.

In interviews, ill people answered questions about the foods they ate and other exposures in the week before they became ill. Of 34 people who were interviewed, 25 (74%) reported eating papayas. This proportion was significantly higher than the proportion found on a survey pdf icon[PDF – 787 KB] of healthy Hispanic people in the months of January through June in which 13% reported eating papayas in the week before they were interviewed.

Two ill people in Florida and one ill person in Texas reported eating papayas during travel to the Northeast in the week before they got sick. This provided additional evidence that papayas were the likely source of this outbreak.