CDC collaborated with public health officials in several states and the U.S. Department of Agriculture’s Food Safety and Inspection Service (USDA-FSIS) to investigate a multistate outbreak of Salmonella Typhimurium infections linked to eating ground beef purchased from Hannaford Supermarkets. Representatives from Hannaford cooperated with public health officials throughout the investigation. Public health investigators used DNA “fingerprints” of Salmonella bacteria obtained through diagnostic testing with pulsed-field gel electrophoresis (PFGE) to identify cases of illness that may have been a part of this outbreak. Investigators used data from PulseNet, the national subtyping network made up of state and local public health laboratories and federal food regulatory laboratories that performs molecular surveillance of foodborne infections. The outbreak strain of Salmonella Typhimurium was resistant to several commonly prescribed antibiotics. This antibiotic resistance may have been associated with an increase in the risk of hospitalization or possible treatment failure in infected individuals.

A total of 20 persons infected with the outbreak strain of Salmonella Typhimurium were reported from 7 states. The number of ill persons identified in each state was as follows: HI (1), KY (1), MA (1), ME (4), NH (6), NY (6), and VT (1). Among persons for whom information was available, illnesses began on or after October 8, 2011. Ill persons ranged in age from 1 year to 79 years old, with a median age of 45 years old. Fifty percent were male. Among the 17 ill persons with available information, 8 (47%) were hospitalized. No deaths were reported.

The outbreak can be visually described with a chart showing the number of people who became ill each day or week. This chart is called an epi curve. The PFGE pattern associated with illness in this outbreak has been seen before in PulseNet, and in the past typically caused 0-3 cases per month. Please see the Timeline for Reporting Cases of Salmonella Infection for more details.

Epidemiologic, traceback, and laboratory investigations conducted by officials in local, state, and federal public health, agriculture, and regulatory agencies linked this outbreak to eating ground beef purchased from Hannaford stores. Among 19 ill persons for whom exposure information was available, 14 (74%) reported consuming ground beef in the week before their illness began. This proportion is significantly higher than results from a survey of healthy persons in which 40% of persons interviewed reported consuming any ground beef at home in the 7 days before they were interviewed. Among the 14 ill persons who reported consuming ground beef, 12 (86%) reported purchasing ground beef from Hannaford stores. For ill persons for whom information was available, reported purchase dates ranged from October 12, 2011 to December 10, 2011. Product information (such as date and location of purchase of ground beef) was collected from ill persons and used by local, state, and federal public health, agriculture, and regulatory agencies to further the investigation.

This was a multidrug resistant strain of Salmonella Typhimurium. As of January 30, 2012, investigators collected antibiotic resistance information on isolates from 5 ill persons infected with the outbreak strain and on one of the leftover ground beef samples collected from an ill person’s home that yielded the outbreak strain. The isolate from the ground beef sample was resistant to multiple antibiotics, including amoxicillin/clavulanic acid, ampicillin, ceftriaxone, cefoxitin, kanamycin, streptomycin, sulfisoxazole, and tetracycline. The isolates from humans were also resistant to amoxicillin/clavulanic acid, ampicillin, ceftriaxone, cefoxitin, kanamycin, streptomycin, and sulfisoxazole; some were also resistant to tetracycline. All human isolates were sensitive to several common antibiotics used in clinical practice, such as ciprofloxacin, gentamicin, and trimethoprim-sulfamethoxazole. Antimicrobial resistance may increase the risk of hospitalization or possible treatment failure in infected individuals. Treatment decisions for individual patients should be guided by the results of antibiotic sensitivity testing performed on the specific Salmonella isolate from that individual.

Persons infected with the outbreak strain of Salmonella Typhimurium, by state, as of January 30, 2012 (n=20) 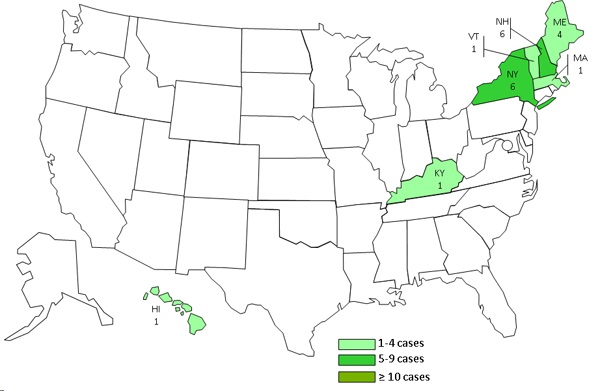 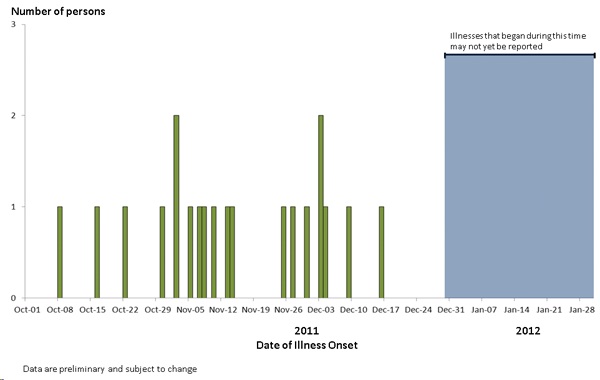