CDC collaborated with public health officials in many states and the U.S. Department of Agriculture’s Food Safety and Inspection Service (USDA-FSIS) to investigate a multistate outbreak of Salmonella Heidelberg infections that was caused by eating ground turkey. Public health investigators used DNA “fingerprints” of Salmonella bacteria to identify ill persons who were part of this outbreak. The Salmonella bacteria were obtained from diagnostic testing; pulsed-field gel electrophoresis (PFGE) was used to determine DNA fingerprint patterns. Investigators used data from PulseNet, the national subtyping network made up of state and local public health laboratories and federal food regulatory laboratories that performs molecular surveillance of foodborne infections. The outbreak strain of Salmonella Heidelberg was resistant to several commonly prescribed antibiotics. This antibiotic resistance may have been associated with an increase in the risk of hospitalization or possible treatment failure in infected individuals.

Among persons for whom information was available, illnesses began on or after February 27, 2011. Ill persons ranged in age from less than 1 year to 90 years old, with a median age of 23 years old. Fifty-five percent were male. Among the 94 ill persons with available information, 37 (39%) were hospitalized. One death was reported.

The outbreak can be visually described with a chart showing the number of people who became ill each day. This chart is called an epi curve. For more details, please see the Timeline for Reporting Cases of Salmonella Infection for more details.

Collaborative investigative efforts of state, local, and federal public health and regulatory agencies indicated that ground turkey was the likely source of this outbreak. Among the 94 ill persons with available information, 51 (54%) reported consuming ground turkey. This proportion was significantly higher than results from a survey of healthy persons in which 11% of persons interviewed reported consuming ground turkey in the 7 days before they were interviewed. Product information (such as date and location of purchase of ground turkey) was collected from ill persons and was used by local, state, and federal public health, agriculture, and regulatory agencies to further the investigation.

Cultures of five ground turkey samples purchased from five retail locations between March 7 and June 27, 2011, yielded Salmonella Heidelberg with the outbreak strain. PFGE patterns from these Salmonella bacteria were added to the PulseNet database between April 11 and July 12, approximately a month after each sample was collected. Preliminary information indicated that all of these products originated from a common food-production establishment (Cargill Meat Solutions Corporation in Springdale, Arkansas). These products were obtained as part of routine sampling in the National Antimicrobial Resistance Monitoring System (NARMS) and were not linked to illnesses.

This was a multidrug resistant strain of Salmonella Heidelberg. As of September 12, 2011, investigators collected antibiotic resistance information on isolates from 12 samples of ground turkey collected at retail and from 23 ill persons infected with the outbreak strain of Salmonella Heidelberg. The isolates from the ground turkey samples were resistant to antibiotics including ampicillin, streptomycin, tetracycline, and gentamicin. The sensitivity testing results indicated that isolates from humans were also resistant to ampicillin and tetracycline, and some were resistant to streptomycin and gentamicin. All human isolates were sensitive to several common antibiotics used in clinical practice such as ciprofloxacin, ceftriaxone, and trimethoprim-sulfamethoxazole. Antimicrobial resistance may increase the risk of hospitalization or possible treatment failure in infected individuals.

A sample of leftover unlabeled frozen ground turkey was collected by public health officials from the home of an ill person infected with the outbreak strain of Salmonella Heidelberg in Ohio. Culture of the ground turkey sample yielded the outbreak strain on July 29, 2011. In addition to the outbreak strain, with the “initial” PGFE pattern, a Salmonella Heidelberg with a second closely related PFGE pattern was identified in the contaminated leftover product. Since February 27, 2011, a total of 27 ill persons have been reported to PulseNet with this closely related PGFE pattern. Among the 13 such patients who have been interviewed, 12 (92%) reported consumption of ground turkey in the week before their illness began. The closely related PGFE pattern was also found in a retail sample of ground turkey taken as part of NARMS surveillance. This retail sample originated from Cargill Meat Solutions Corporation establishment in Springdale, Arkansas. Based on these findings, the 27 ill persons with this second closely related PFGE pattern of Salmonella Heidelberg were included in the total count of outbreak cases.

On July 29, 2011, USDA-FSIS released a public health alert for frozen or fresh ground turkey products. This alert reminded consumers of the critical importance of following package cooking instructions for frozen or fresh ground turkey products and general food safety guidelines when handling and preparing any raw meat or poultry. The alert advised that, while cooking instructions may give a specific number of minutes of cooking for each side of the patty in order to attain 165°F internal temperature, consumers should be aware that actual time may vary depending on the cooking method (broiling, frying, or grilling) and the temperature of the product (chilled versus frozen). Therefore, it is important that the final temperature of 165 °F be reached for safety. The alert recommends that consumers not rely on the cooking time for each side of the patty, but use a food thermometer. For more information on this public health alert, please see FSIS Issues Public Health Alert for Frozen, Fresh Ground Turkey Products.

On August 3, 2011, Cargill Meat Solutions Corporation, a Springdale, Arkansas, establishment, recalled approximately 36 million pounds of ground turkey products that may have been contaminated with a multidrug resistant strain of Salmonella Heidelberg. The products subject to recall were all comprised of ground turkey meat and had the establishment number “P-963” inside the USDA mark of inspection.

On September 11, 2011, Cargill Meat Solutions Corporation recalled another 185,000 pounds of ground turkey products after product samples at the plant tested positive for the outbreak strain of Salmonella Heidelberg based on sample results from an intensive in-plant investigation performed by FSIS. On September 27, 2011 FSIS reported that one positive sample was confirmed to have the outbreak strain and the isolate was multidrug resistant.

Persons infected with the outbreak strain of Salmonella Heidelberg, by state, as of November 7, 2011 (n=136) 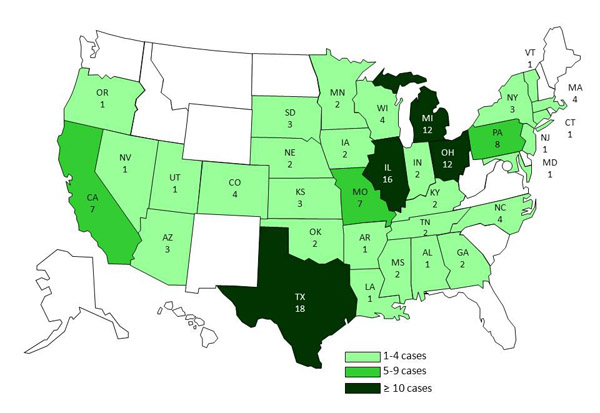 Persons infected with the outbreak strain of Salmonella Heidelberg, by week of illness onset* *n=134 for whom information was reported as of November 7, 2011. Onset data not currently available for all persons with reported illness.