CDC collaborated with public health officials in many states, the U.S. Department of Agriculture’s Food Safety and Inspection Service (USDA/FSIS), and the U.S. Food and Drug Administration (FDA) to investigate a multistate outbreak of Salmonella serotype Chester infections. Investigators used DNA analysis of Salmonella bacteria obtained through diagnostic testing to identify cases of illness that were part of this outbreak.

The outbreak can be visually described with a chart showing the number of people who became ill each day. This chart is called an epidemic curve or epi curve. For more details, please see the Timeline for Reporting Cases of Salmonella Infection.

A widely distributed contaminated food product might cause illnesses across the United States. The identity of the contaminated product often is not readily apparent. In outbreaks like this one, identification of the contaminated product requires conducting detailed standardized interviews with persons who were ill. It may also require conducting interviews with non-ill members of the public (“controls”) to get information about foods recently eaten and other exposures to compare with information from the ill persons. The investigation is often supplemented by laboratory testing of suspected products.

On June 17, 2010, ConAgra Foods announced a precautionary recall of Marie Callender’s Cheesy Chicken & Rice single-serve frozen entréesExternal after being informed by the CDC of a possible association between this product and the outbreak of Salmonella Chester infections.

As an agency within the U.S. Department of Health and Human Services (HHS), CDC leads federal efforts to gather data on foodborne illnesses, investigate foodborne illnesses and outbreaks, and monitor the effectiveness of prevention and control efforts. CDC is not a food safety regulatory agency but works closely with the food safety regulatory agencies, in particular with HHS’s U.S. Food and Drug Administration (FDA) and the Food Safety and Inspection Service within the United States Department of Agriculture (USDA). CDC also plays a key role in building state and local health department epidemiology, laboratory, and environmental health capacity to support foodborne disease surveillance and outbreak response. Notably, CDC data can be used to help document the effectiveness of regulatory interventions..

Persons infected with the outbreak strain of Salmonella Chester, by state, as of August 27, 2010 (n=44) 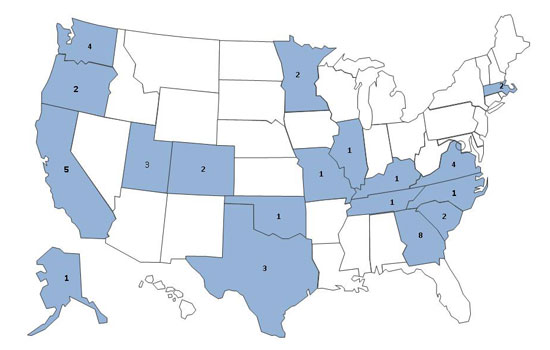 Persons infected with the outbreak strain of Salmonella Chester, by week of illness onset* 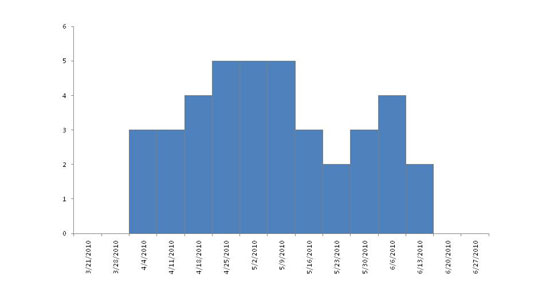 *n=44 for whom information was reported as of 08/27/10. Some illness onset dates have been estimated from other reported information.