CDC has been working with state, local, and tribal health departments, the Indian Health Service, and the Food and Drug AdministrationExternal (FDA) to investigate a large, multi-state outbreak of Salmonella Saintpaul. The outbreak appears to be over. However, CDC and state health departments are continuing to conduct surveillance for cases of infection with the outbreak strain. Public health officials also continue to analyze data gathered during the investigations.

CDC and its public health partners on the federal, state, local, and tribal levels searched for the source of the outbreak and took steps to stop transmission of the infection. The investigators depended on the cooperation of hundreds of ill and well persons across the country who answered questions about what foods they had recently consumed. This allowed investigators to link illness with particular food items. In addition, public health officials in several states, with the assistance of CDC, investigated clusters of ill persons who had eaten at the same restaurants. FDA and state investigators traced the origin of some produce items back through the distribution chain and collected samples to test for the presence of the outbreak strain.

The investigation showed that jalapeño peppers were a major source of contamination and that serrano peppers also were a source. In addition, tomatoes were possibly a source, particularly early in the outbreak. Jalapeño peppers were traced back to distributors in the United States that received produce grown and packed in Mexico. The outbreak strain was isolated from samples of jalapeño peppers collected in a US warehouse and a patient’s home and from samples of serrano peppers and water collected on a farm in Mexico.

Complete demographic information was available for 565 ill people. Of these, 52% were male; 79% were white, 8% were American Indian/Alaska Native, 3% were black, 2% were Asian/Pacific Islander, and 7% reported other or multiple races. Hispanic ethnicity was reported for 22%. Patients ranged in age from <1 to 99 years with a median age of 33 years. The rate of illness was highest among persons 20 to 29 years old. Cases were distributed among 43 states, the District of Columbia, and Canada, with particularly high incidence rates in New Mexico and Texas. At least 286 persons were hospitalized, and the infection might have contributed to two deaths.

Only 18 persons infected with this strain of Salmonella Saintpaul were identified in the country during April through August of 2007. The previous rarity of this strain and the distribution of illnesses in all U.S. regions suggest that the implicated food is distributed throughout much of the country. Because many persons with Salmonella illness do not have a stool specimen tested, it is likely that many more illnesses have occurred than those reported. Some of these unreported illnesses may be in states that are not on today’s map.

Persons infected with the outbreak strain of Salmonella Saintpaul, by date of illness onset* 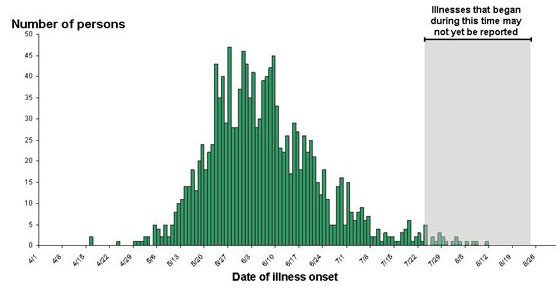 Persons infected with the outbreak strain of Salmonella Saintpaul, by state of residence, as of August 25, 2008 (n=1442) 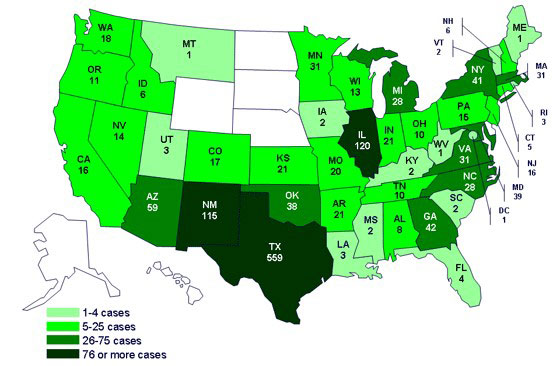 Incidence of cases of infection with the outbreak strain of Salmonella Saintpaul, by state of residence, as of August 25, 2008 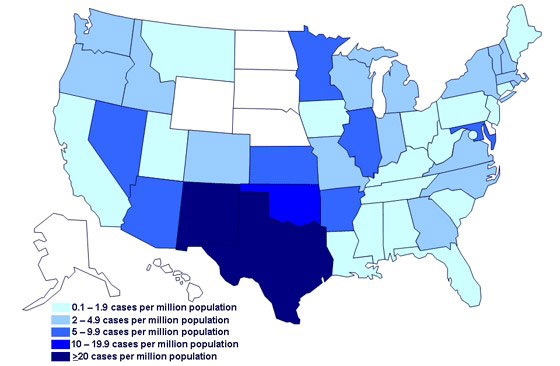 Most persons infected with Salmonella develop diarrhea, fever, and abdominal cramps 12-72 hours after infection. Infection is usually diagnosed by culture of a stool sample. The illness usually lasts 4-7 days. Although most people recover without treatment, severe infections may occur. Infants, elderly persons, and those with impaired immune systems are more likely than others to develop severe illness. When severe infection occurs, Salmonella may spread from the intestines to the bloodstream and then to other body sites, and can cause death. In these severe cases, antibiotic treatment may be necessary.

The U.S. Food and Drug Administration (FDA) has lifted its adviceExternal to consumers to avoid eating jalapeño and serrano peppers grown, harvested or packed in Mexico.

In July, the FDA lifted its advice to avoid raw red round, red Roma, and red plum tomatoes.

The FDA continues to work with CDC, Mexican authorities, state regulatory agencies and food industry groups to ensure that Americans continue to enjoy one of the safest food supplies in the world.

Consumers are reminded that vegetables are an important part of a healthy diet and that cooking vegetables kills bacteria, including Salmonella.

What is salmonellosis? What are the symptoms?

Salmonellosis is an infection caused by bacteria called Salmonella. Most people infected with Salmonella develop fever, diarrhea, and abdominal cramps 12 – 72 hours after exposure. Although illness usually lasts 4 – 7 days and most people recover without treatment, severe illness may occur that requires medical attention and hospitalization. In these patients, the Salmonella infection can spread from the intestines to the bloodstream and then to other body sites. In this situation, the infection can cause death unless the patient is treated promptly with antibiotics. Infants, elderly people, and people with impaired immune systems are more likely than other people to become severely ill.

How do people get infected with Salmonella?

Salmonella bacteria live in the intestinal tracts of many animals, including food animals such as cattle and poultry, wild animals, and pets. Salmonella usually are transmitted to humans by eating food contaminated with animal feces. Contaminated foods usually look and smell normal. Contaminated foods are often of animal origin, such as poultry, eggs, pork, and raw milk. However, contaminated fruits and vegetables also cause many illnesses. Thorough cooking kills Salmonella.

The feces of some pets, especially reptiles, can contain Salmonella without causing illness in the animal. Birds commonly carry Salmonella, and outbreaks of illness among young children given baby chicks at Easter have prompted health authorities to advise against this practice. People should always wash hands after being in contact with any animal or its environment. Adults should assure that children practice proper handwashing techniques. More information on proper handwashing.

Food handlers and others can contaminate food by not washing hands with soap after handling raw poultry, eggs, or meat, or after using the bathroom.

Most products contaminated with Salmonella do not taste or look any different than usual.

How is Salmonella infection diagnosed?

Salmonella infection is usually diagnosed by culture of a stool sample. In severe illness, it can sometimes be detected in other parts of the body such as blood.

How can Salmonella infections be treated?

Salmonella infections usually resolve in 4 – 7 days and usually do not require treatment other than oral fluids. Persons with severe diarrhea may require rehydration with intravenous fluids. Antibiotics, such as ampicillin, trimethoprim-sulfamethoxazole, or ciprofloxacin, are not usually necessary unless the infection spreads from the intestines.

Are there long term consequences to a Salmonella infection?

Persons with diarrhea usually recover completely, although it may be several months before their bowel habits are entirely normal. A small number of persons with Salmonella develop pain in their joints, irritation of the eyes, and painful urination. This is called Reiter’s syndrome. It can last for months or years, and can lead to chronic arthritis which is difficult to treat. Antibiotic treatment does not make a difference in whether or not the person develops arthritis.

How common is salmonellosis?

In 2004, CDC estimated that there are about 1.4 million illnesses, 15,000 hospitalizations, and 400 deaths from Salmonella infection in the United States every year. Approximately 40,000 of those infections are confirmed each year by isolation of the Salmonella strain. Salmonellosis is more common in summer than in winter.

Children are the more likely than adults to get salmonellosis. The rate of diagnosed infections in children less than five years old is about five times higher than the rate in all other persons. Young children, the elderly, and the immunocompromised are the most likely to have severe infections.

How can tomatoes become contaminated with Salmonella?

Salmonella in the environment can contaminate tomatoes. Salmonella can be found in the feces of many animals (e.g., food animals, reptiles, amphibians, birds) and in some habitats, such as ponds and drainage ditches. Although the exact mechanism by which tomatoes become contaminated is not known, experimental evidence suggests certain possibilities. In experimental studies, the insides of whole tomatoes can be contaminated in at least two ways: (1) if tomatoes are immersed in water that is colder than the tomato, water can enter through the stem scar; if the water is contaminated, Salmonella can be carried in; (2) if contaminated water touches the stem or flower of a tomato plant, the growing tomato can be contaminated. Contamination on the tomato surface also can be transferred to the inside when it is cut. Food handlers infected with Salmonella who have not washed their hands may also contaminate tomatoes during preparation. If a cut tomato that is contaminated with Salmonella is kept out of the refrigerator, the bacteria can multiply to much higher numbers.

What is the CDC’s current advice about eating tomatoes?

At this time, consumers should avoid eating or handling raw red plum, red Roma, and round red tomatoes unless they are from the sources listedExternal. If consumers have tomatoes in their homes and are unsure of where they were grown or harvested, they are encouraged to contact the store where they bought the tomatoes. Consumers may continue to buy cherry tomatoes, grape tomatoes, tomatoes with the vine still attached, and tomatoes grown at home — all of which do not appear to be involved in the outbreak.

Consumers everywhere are advised to:

Is it OK for consumers to eat tomatoes that might be associated with this outbreak if they cook them?

FDA is recommending that consumers not eat any tomatoes that could be associated with this outbreak, either raw or cooked.

Are tomatoes from farmers’ markets included in this outbreak?

During this outbreak, is it safer to eat locally grown tomatoes?

Consumers should confirm with their retailers that the source of “locally grown” tomatoes is one of the sources listed on the FDA listExternal.