Information on this page is related to An Atlas of Salmonella in the United States, 1968–2011.

Each year in the United States, salmonellosis is estimated to cause more than 1.2 million illnesses, 23,000 hospitalizations, and 450 deaths. Salmonella infections most often cause gastroenteritis, which can range from mild to severe. Invasive Salmonella infections are rare; but can be severe and life-threatening.

Salmonella have many different serotypes. By identifying the structures on the bacteria’s surfaces, scientists can classify the many types of Salmonella into serotypes. Each has a unique history. The different serotypes can behave differently in how often they sicken people, when and where people get sick, and what foods or other sources they contaminate. Serotype infections are considered invasive when the Salmonella is isolated from blood or another part of the body that usually has no bacteria in it at all.

Since the 1960s, public health scientists in the US have used serotyping to help find Salmonella outbreaks and track them to their sources.

These snapshots highlight five Salmonella serotypes, their history, and some surprising facts. 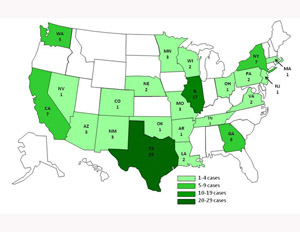 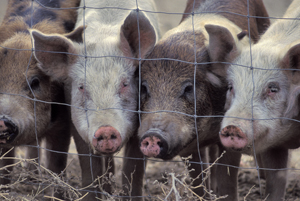 In 1885 while studying swine diseases, microbiologist Theobold Smith and veterinarian Daniel Salmon discovered the first type of Salmonella and found that it caused a serious illness in pigs. Salmonella Choleraesuis, named for Dr. Salmon, is not included in the Atlas because it is so rare.

Human cases of infection with this serotype are unusual in the United States and typically occur in adults who live in rural areas and work with pigs. The average age of people infected with serotype Choleraesuis is around 40. Few infections occur in children. Salmonella Choleraesuis is unusual—although not unique—because it often invades the bloodstream. Unlike many more common Salmonella serotypes, over half of the serotype Choleraesuis infections are invasive. Outbreaks caused from eating contaminated pork are extremely rare.

The reports from sources other than humans are almost all from pigs. It remains an important cause of disease in pigs to this day.

At a Glance: Salmonella serotype Choleraesuis: 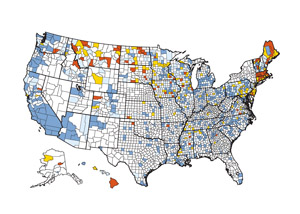 Like the majority of other serotypes affecting humans, Salmonella Enteritidis (SE) affects people of all ages. Infections increased in the early 1980s in the Northeastern states, spread to the mid-Atlantic region by the end of the decade, then catapulted to California and gradually, the rest of the country. At the same time, it spread around the world. More recently, SE has also appeared in “broilers” (chickens that we eat). Now, SE is the most common serotype in the United States and in many other countries.

Since the 1990s, infection rates have decreased as the egg industry voluntarily placed controls on egg flocks and consumers have eaten fewer raw eggs. Still, large outbreaks have occurred. The US Food and Drug Administration (FDA) enacted the Egg Rule in 2010 to control SE on egg farms; they also established safe handling and labeling requirements for shell eggs. 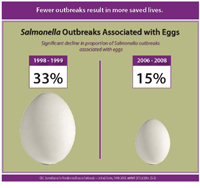 At a Glance: Salmonella serotype Enteritidis:

Forty years ago, infections with serotype Agona were rare and seen only in people traveling to other parts of the world. Then in 1971, an outbreak at an Arkansas restaurant spotlighted its arrival in this country. When traced back, the outbreak was linked to local chickens that were fed chicken feed made from, among other things, anchovies ground into fish meal. The meal was contaminated with Salmonella Agona during the drying or grinding process. It was used in chicken feed around the world, and Salmonella Agona suddenly appeared in many countries. In the US, it first appeared in chickens and turkeys, then in other animals, and in people eating them. While infections have decreased some, it is not likely to go away.

At a Glance: Salmonella serotype Agona: 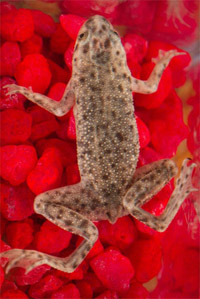 Some serotypes have a limited geography, perhaps because they have an animal host that only lives in certain places. For example, in the 1980s, Salmonella Javiana infections typically occurred in people who lived or vacationed in southern Florida. It did not seem to be associated with eating a particular food. Over several decades, the range expanded to all of Florida, along the Gulf Coast and up the Atlantic Coast. Large outbreaks have been linked to contaminated tomatoes from the Southeast.

Scientists speculate that Javiana may have a amphibious host in the environment that sometimes leads to contamination of fresh produce. The geographic range of the host may be expanding.

At a Glance: Salmonella serotype Javiana: 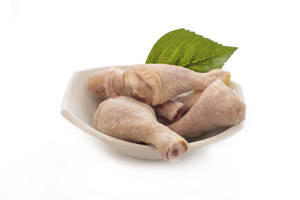 A 1933 outbreak in Heidelberg, Germany sickened 19 people who ate fresh homemade pork liverwurst. One person died. Scientists from the University of Heidelberg found a previously unknown serotype of Salmonella in the liverwurst and in the woman who died. By the 1950s, infections from Salmonella Heidelberg (named for the city where it was discovered) were commonly reported from all inhabited continents as well as from many different animals. Like Salmonella Enteritidis, Heidelberg can pass from the hen to the chick through the contaminated egg, without causing illness in the mother hen or baby chick. Egg-related Heidelberg infections have increased and decreased along with those from Salmonella Enteritidis. In recent years, Heidelberg strains in poultry have become more resistant to antibiotics and have caused large outbreaks in people eating chicken parts and ground turkey.

At a Glance: Salmonella serotype Heidelberg:

View CDC’s series of interactive graphs to see all Salmonella isolates or details about Salmonella Heidelberg [PDF – 15 pages], one of five of the most common serotypes with resistance to antibiotics used to treat Salmonella infections.