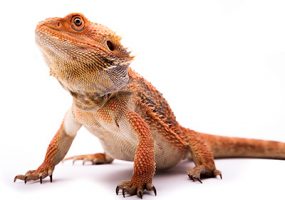 Bearded dragons can carry Salmonella germs in their droppings even if they look healthy and clean. These germs can easily spread to their bodies, habitats, and anything in the area where they live.

You can get sick from touching your bearded dragon or anything in its environment and then touching your mouth or face and swallowing Salmonella germs.

Take these steps to stay healthy around bearded dragons:

Advice to Stores that Sell or Display Reptiles

Public health investigators used the PulseNet system to identify illnesses that may be part of this outbreak. PulseNet is the national subtyping network of public health and food regulatory agency laboratories coordinated by CDC. DNA fingerprinting is performed on Salmonella bacteria isolated from ill people by using a standardized laboratory and data analysis method called whole genome sequencing (WGS). CDC PulseNet manages a national database of these sequences that are used to identify possible outbreaks. WGS gives investigators detailed information about the bacteria causing illness. In this investigation, WGS showed that bacteria isolated from ill people were closely related genetically. This means that people in this outbreak were more likely to share a common source of infection.

As of November 20, 2020, a total of 18 people infected with the outbreak strain of Salmonella Muenster were reported from 11 states. A list of the states and the number of cases in each can be found on the Map of Reported Cases page.

Illnesses started on dates ranging from January 29, 2020, to October 17, 2020. Ill people ranged in age from less than 1 year to 76 years, with a median age of 26 years. Six ill people are children under 5 years of age. Fifty-six percent of ill people were female. Of 17 ill people with information available, 11 were hospitalized. No deaths were reported.

Epidemiologic and laboratory evidence showed that contact with pet bearded dragons was the likely source of this outbreak.

In interviews, people answered questions about animal contact in the week before they got sick. Of the 16 people interviewed, 11 (69%) reported contact with bearded dragons before getting sick. Ill people reported buying bearded dragons from various pet stores in multiple states. A common supplier was not identified.

The outbreak strain making people sick was identified in samples collected from a bearded dragon and its environment from the home of an ill person in Virginia.

Bearded dragons can carry Salmonella germs that can make people sick even if they look healthy and clean. Bearded dragon owners should always follow steps to stay healthy around their pet.

This outbreak investigation is over. CDC will continue to work with state public health partners to monitor for Salmonella infections linked to contact with pet bearded dragons.