CDC is collaborating with public health officials in many states and the U.S. Department of Agriculture’s Food Safety and Inspection Service (USDA-FSIS) to investigate a multistate outbreak of Salmonella Hadar infections. Investigators are using DNA analysis of Salmonella bacteria obtained through diagnostic testing to identify cases of illness that may be part of this outbreak. The outbreak strain of Salmonella Hadar is resistant to many commonly prescribed antibiotics, which can increase the risk of hospitalization or possible treatment failure in infected individuals.

The outbreak can be visually described with a chart showing the number of people who became ill each day. This chart is called an epi curve. Illnesses that occurred after March 18, 2011, might not be reported yet due to the time it takes between when a person becomes ill and when the illness is reported. This takes an average of 2 to 3 weeks. Please see the Timeline for Reporting Cases of Salmonella Infection for more details.

Collaborative investigative efforts of state, local, and federal public health and regulatory agencies have linked this outbreak to eating turkey burgers. Investigators were not able to determine consumption of turkey burgers for all case-patients. However, FSIS determined that at least three of the case-patients in Colorado, Ohio, and Wisconsin specifically reported eating Jennie-O Turkey burgers the week before their illness began. Samples of Jennie-O ground turkey burgers were collected by public health agencies from the homes of case-patients in Colorado and Wisconsin who tested positive for the outbreak strain of Salmonella Hadar. Both turkey burger samples were positive for the outbreak strain. States have reported antibiotic resistance of the outbreak strain to several clinically useful drugs including ampicillin, amoxicillin/clavulanate, cephalothin, and tetracycline.

Most persons infected with Salmonella bacteria develop diarrhea, fever, and abdominal cramps 12 to 72 hours after infection. The illness usually lasts 4 to 7 days, and most persons recover without treatment. However, in some persons, the diarrhea may be so severe that the patient needs to be hospitalized. Salmonella infection may spread from the intestines to the bloodstream, and then to other body sites and can cause death unless the person is treated promptly with antibiotics. The elderly, infants, and those with impaired immune systems are more likely to have a severe illness from Salmonella infection.

On April 1, 2011, Jennie-O Turkey Store®, in Willmar, Minnesota, recalled approximately 54,960 pounds of frozen, raw turkey burger products that may be contaminated with Salmonella. The recall includes 4-pound boxes of Jennie-O Turkey Store® “All Natural Turkey Burgers with seasonings Lean White Meat”. Each box contains 12 1/3-pound individually wrapped burgers. A use by date of “DEC 23 2011” and an identifying lot code of “32710” through “32780” are inkjetted on the side panel of each box, just above the opening tear strip. Establishment number “P-7760” is located within the USDA mark of inspection on the front of each box. The products were packaged on Nov. 23, 2010 and were distributed to retail establishments nationwide. As FSIS continues its investigation of illnesses related to this recall, additional raw turkey products may be recalled. Consumers are advised to review the USDA’s FSIS Recall Press Release for additional information.

CDC leads federal efforts to gather data on foodborne illnesses, investigate foodborne illnesses and outbreaks, and monitor the effectiveness of prevention and control efforts. CDC is not a food safety regulatory agency but works closely with the food safety regulatory agencies, in particular, with the U.S. Food and Drug Administration and USDA-FSIS. CDC also plays a key role in building state and local health department epidemiology, laboratory, and environmental health capacity to support foodborne disease surveillance and outbreak response. Notably, CDC data can be used to help document the effectiveness of regulatory interventions.

Persons infected with the outbreak strain of Salmonella Hadar, by state, as of April 1, 2011 (n=12) 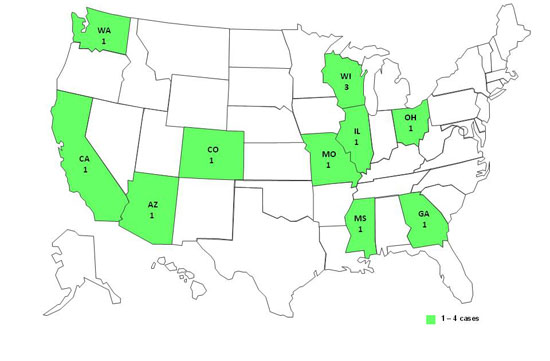 Persons infected with the outbreak strain of Salmonella Hadar, by date of isolation* 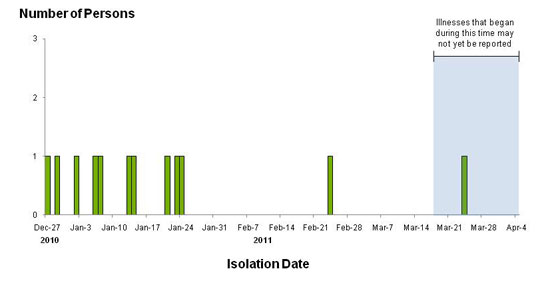 *n=12 for whom information was reported as of April 1, 2011. Onset data not currently available for all persons with reported illness.