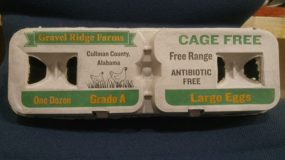 Public health investigators used the PulseNet system to identify illnesses that were part of this outbreak. PulseNet is the national subtyping network of public health and food regulatory agency laboratories coordinated by CDC. DNA fingerprinting was performed on Salmonella bacteria isolated from ill people by using techniques called pulsed-field gel electrophoresis (PFGE) and whole genome sequencing (WGS). CDC PulseNet manages a national database of these DNA fingerprints to identify possible outbreaks. WGS gives a more detailed DNA fingerprint than PFGE. WGS performed on bacteria isolated from ill people showed that they were closely related genetically. This means that people in this outbreak were more likely to share a common source of infection.

As of October 24, 2018, 44 people infected with the outbreak strain of Salmonella Enteritidis were reported from 11 states. A list of the states and the number of cases in each can be found on the Map of Reported Cases page.

Illnesses started on dates ranging from May 17, 2018 to August 26, 2018. Ill people ranged in age from one year to 94, with a median age of 32. Sixty percent of ill people were female. Of 37 people with information available, 12 (32%) were hospitalized. No deaths were reported.

Epidemiologic, traceback, and laboratory evidence indicated that shell eggs from Gravel Ridge Farms were the likely source of this outbreak.

State and local health officials interviewed ill people and asked questions about the foods they ate and other exposures in the week before they became ill. Twenty-six (81%) of 32 people interviewed reported eating restaurant dishes made with eggs. This percentage was significantly higher than results from a survey Cdc-pdf[PDF – 787 KB] of healthy people in which 38% of respondents reported eating any eggs away from home in the week before they were interviewed. These restaurants reported using shell eggs in the dishes eaten by ill people.

On September 8, 2018, Gravel Ridge Farms recalledExternal cage-free large eggs with use by dates of July 25, 2018 through October 3, 2018 because they might have been contaminated with Salmonella bacteria.