CDC and the U.S. Food and Drug Administration (FDA) collaborated with public health officials in Texas, Illinois, Georgia, and other states to investigate a multistate outbreak of Salmonella Agona infections linked to whole, fresh papayas imported from Mexico. Public health investigators used DNA “fingerprints” of Salmonella bacteria obtained through diagnostic testing with pulsed-field gel electrophoresis, or PFGE, to identify cases of illness that were part of this outbreak. They used data from PulseNet, the national subtyping network made up of state and local public health laboratories and federal food regulatory laboratories that performs molecular surveillance of foodborne infections.

Among persons for whom information is available, illnesses began on or after January 17, 2011. Ill persons ranged in age from less than 1 year old to 91 years old, and the median age was 21 years old. Thirty-nine percent of patients were younger than 5 years old. Fifty-six percent were female. Eleven persons reported travel to Mexico in the week before they became ill. Ten patients were hospitalized. No deaths were reported.

The outbreak can be visually described with a chart showing the number of people who became ill each day. This chart is called an epi curve. For more details, please see the Timeline for Reporting Cases of Salmonella Infection for more details.

Epidemiologic, traceback, and laboratory investigations conducted by officials in many local, state, and federal public health, agriculture, and regulatory agencies linked this outbreak to eating fresh, whole papayas imported from Mexico by Agromod Produce, Inc. of McAllen, Texas. Among 56 ill persons for whom information is available, 57% reported consuming papayas in the week before illness onset. This was significantly different compared with results from a survey of healthy persons in which 11% of persons of Hispanic/Latino ethnicity and 3% of non-Hispanic/Latino ethnicity reported consuming papaya in the 7 days before they were interviewed. Product information such as date and location of purchase of papayas was collected from ill persons and used by local, state, and federal public health, agriculture, and regulatory agencies to conduct traceback investigations. Agromod Produce, Inc. was identified as a common supplier of papayas purchased by ill persons.

Sampling of papayas by FDA as part of the outbreak investigation identified two samples with Salmonella Agona that were indistinguishable by PFGE from the outbreak strain. One sample was collected at Agromod Produce, Inc. in McAllen, Texas and the other was collected at the U.S.-Mexico border from a shipment destined for Agromod Produce, Inc. These papayas had been imported from Mexico. The shipments from which Salmonella was isolated were not distributed in the United States. FDA is working closely with Agromod Produce Inc. and with Mexican health officials to determine how the papayas became contaminated.

The strain of Salmonella Agona associated with this outbreak is composed of four closely related PFGE patterns that have been rarely identified before in PulseNet. Three of these four PFGE patterns were first identified beginning in 2010. A total of 119 cases from 14 states were reported between May 28, 2010, and September 10, 2010. Distribution of age, sex, ethnicity, and state of residence among ill persons was similar to the distribution seen in the current outbreak. Despite an intensive investigation during the summer of 2010 by local, state, and federal public health agencies that focused on fresh fruit, including papaya, the source of the outbreak was not determined.

On July 23, 2011, Agromod Produce, Inc. of McAllen, Texas voluntarily recalledExternal fresh, whole papayas because they have the potential to be contaminated with Salmonella. The recall includes all Blondie, Yaya, Mañanita, and Tastylicious Brand papayas sold prior to July 23, 2011. These fresh, whole papayas were imported from Mexico and distributed nationwide and to Canada through retail stores and wholesalers.

While the shelf-life of the recalled, fresh, whole papayas has been exceeded, consumers might still have recalled papayas in their homes if the papayas were frozen or dehydrated at home.

FDA and its counterpart agencies in the Mexican government, the National Service for Agroalimentary Public Health, Safety and Quality (SENASICA) and the Federal Commission for the Protection against Sanitary Risks (COFEPRIS) have been working closely together to find the source or sources of contamination of Salmonella in fresh papayas entering the United States from Mexico. From May 12, 2011, to August 18, 2011, FDA analysis found a 15.6% Salmonella contamination rate. The positive samples were from 28 different firms and include nearly all the major papaya producing regions in Mexico. Under an FDA Import AlertExternal issued on August 25, 2011, papayas from each source in Mexico may be denied admission into the United States unless the importer shows they are not contaminated with Salmonella.

While the shelf-life of the recalled, fresh, whole papayas has been exceeded, consumers might still have recalled papayas in their homes if the papayas were frozen or dehydrated at home. 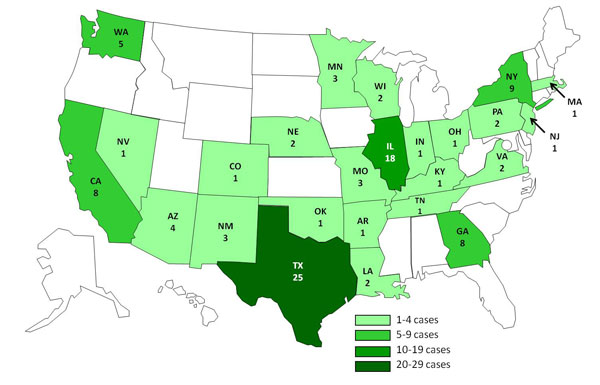 Persons infected with the outbreak strain of Salmonella Agona, by date of illness onset* 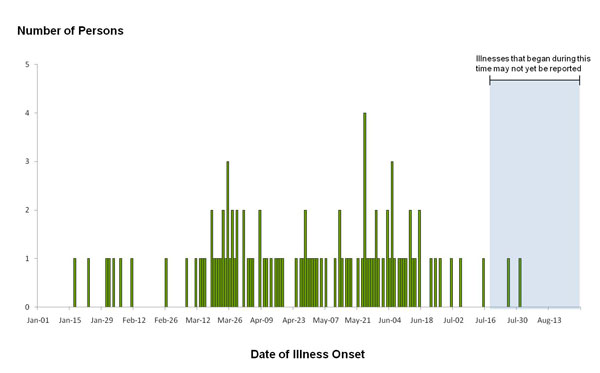 *n=103 for whom information was reported as of August 25, 2011. Onset data not currently available for all persons with reported illness.