Outbreak of Salmonella Infections Linked to Tahini from Achdut Ltd.

This outbreak appears to be over, but recalled tahini products have a long shelf life and may still be in people’s homes. Consumers unaware of the recall could continue to eat these products and potentially get sick. Visit the FDA websiteExternal for a full list of recalled products. 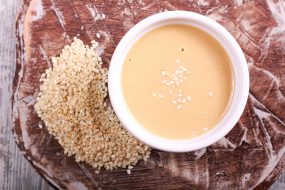 Public health investigators used the PulseNet system to identify illnesses that may have been part of this outbreak. PulseNet is the national subtyping network of public health and food regulatory agency laboratories coordinated by CDC. DNA fingerprinting is performed on Salmonella bacteria isolated from ill people by using techniques called pulsed-field gel electrophoresis (PFGE) and whole genome sequencing (WGS). CDC PulseNet manages a national database of these DNA fingerprints to identify possible outbreaks. WGS gives a more detailed DNA fingerprint than PFGE. WGS performed on bacteria isolated from ill people showed that they were closely related genetically. This means that people in this outbreak were more likely to share a common source of infection.

As of February 27, 2019, eight people infected with the outbreak strain of Salmonella Concord were reported from four states. A list of the states and the number of cases in each can be found on the Map of Reported Cases page.

Illnesses started on dates ranging from April 21, 2018 to January 3, 2019. Ill people ranged in age from 14 to 52 years, with a median age of 29. Sixty-three percent of ill people were male. No hospitalizations or deaths were reported.

Epidemiologic and laboratory evidence indicated that tahini products from Achdut Ltd. were the likely source of this outbreak.

Investigators with the New York City Department of Health and Mental Hygiene collected records and food samples at a restaurant where ill people ate. The outbreak strain was isolated in samples of tahini. Records indicated that the tahini used at the restaurant was Achva brand tahini manufactured by Achdut Ltd.

FDA identified Salmonella Concord in a sample of tahini collected at the point of import. The tahini was Baron’s brand manufactured by Achdut Ltd.

On November 27, 2018, Achdut Ltd. recalled tahini products because they might have been contaminated with Salmonella. The FDA website has a list of the tahini productsExternal that were recalled.