This outbreak investigation is over. CDC and public health officials in several states investigated a multistate outbreak of Salmonella infections linked to contact with pet hedgehogs. Hedgehogs can carry Salmonella even when they look healthy and clean. Pet hedgehog owners can take steps to reduce the chance that they or their children get an infection. 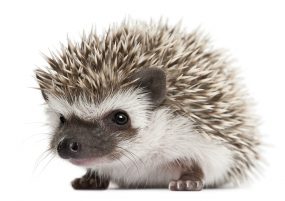 Hedgehogs can carry Salmonella germs in their droppings while appearing healthy and clean. These germs can easily spread to their bodies, habitats, toys, bedding, and anything in the area where they live. People can get sick after they touch hedgehogs or anything in their habitats.

People who own or come in contact with hedgehogs can take steps to stay healthy around their pet:

A total of 54 people infected with the outbreak strain of Salmonella Typhimurium were reported from 23 states. A list of the states and the number of cases in each can be found on the map of reported cases page.

In interviews, ill people answered questions about animal contact in the week before they became ill. Of 37 people interviewed, 31 (84%) reported contact with hedgehogs before becoming ill. Ill people reported buying hedgehogs from various sources, including pet stores, breeders, or online.

Regardless of where hedgehogs are purchased, they can carry Salmonella germs that can make people sick. People who own or come in contact with hedgehogs can take steps to stay healthy around their pet.