CDC collaborated with public health and agriculture officials in New York, New Jersey, other states, the U.S. Department of Agriculture’s Food Safety and Inspection Service (USDA-FSIS), and the U.S. Food and Drug Administration to investigate a multistate outbreak of Salmonella Heidelberg infections linked to a kosher chicken liver product labeled as “kosher broiled chicken livers,” which is not ready-to-eat and requires further cooking before eating. Public health investigators used DNA “fingerprints” of Salmonella bacteria obtained through diagnostic testing with pulsed-field gel electrophoresis (PFGE) to identify cases of illness that may be part of this outbreak. They used data from PulseNet, the national subtyping network made up of state and local public health laboratories and federal food regulatory laboratories that performs molecular surveillance of foodborne infections. Because the Salmonella Heidelberg PFGE pattern associated with this outbreak commonly occurs in the United States, some of the cases with this pattern may not have been related to this outbreak. Based on the previous 5 years of reports to PulseNet, approximately 30-40 cases with the outbreak strain would be expected to be reported per month in the United States. The outbreak strain is different from another strain of Salmonella Heidelberg associated with ground turkey recalled in 2011.

In August 2011, CDC identified a sustained increase in the number of Salmonella Heidelberg isolates with the outbreak strain reported to PulseNet from New York and New Jersey. Based on the previous 5 years of reports to PulseNet, New York and New Jersey would expect approximately 5 cases per month, but in June through August 2011, these states experienced approximately 30-40 cases a month. No sustained increase in the number of illnesses above baseline has been identified in other states. USDA-FSIS’s ongoing investigation determined that the “kosher broiled chicken livers” were distributed to the following states: New York, New Jersey, Pennsylvania, Maryland, Minnesota, Ohio, Rhode Island, and Florida. As the investigation progresses, additional states may be identified.

In cases reported to PulseNet from April 1 to November 17, 2011, a total of 190 illnesses occurred due to Salmonella Heidelberg with this PFGE pattern in states where the “kosher broiled chicken livers” were distributed. The number of ill persons identified in each state the product was distributed to is as follows: New York (109), New Jersey (62), Pennsylvania (10), Maryland (6), Ohio (2), and Minnesota (1). Rhode Island and Florida have not identified any cases linked to this outbreak during this period.

Among persons for whom information is available in in these states, ill persons ranged in age from <1 to 97 years with a median age of 14 years. Forty-nine percent were female. Among the 154 ill persons with available information, 30 (19%) were hospitalized. No deaths were reported.

The outbreak can be visually described with a chart showing the number of people who became ill each day or week. This chart is called an epi curve. This takes an average of 2 to 3 weeks. Please see the Timeline for Reporting Cases of Salmonella Infection for more details.

Epidemiologic and laboratory investigations conducted by officials in local, state, and federal public health, agriculture, and regulatory agencies linked this outbreak to eating “kosher broiled chicken livers” from Schreiber Processing Corporation (doing business as Alle Processing Corporation/MealMart Company), and chopped chicken liver prepared from this product. These “kosher broiled chicken livers” are sold at retail stores and may be used as an ingredient in other prepared foods. These products appear to be ready-to-eat, but are in fact partially cooked, and therefore need to be fully cooked before eating. Consumers may have incorrectly thought the use of the word “broiled” in the label meant the chicken liver was ready-to-eat; however, these chicken livers must be fully cooked before eating. Alle Processing Corporation/MealMart Company cooperated with public health investigators throughout this investigation.

Among 39 ill persons for whom information is available, 28 (72%) reported consuming chicken liver products in the week before their illness began. Laboratory testing conducted by the New York State Department of Agriculture and Markets Laboratory Division identified the outbreak strain of Salmonella Heidelberg in samples of “kosher broiled chicken livers” and chopped liver products obtained from retail stores.

New York City receives funding under the CDC FoodCORE (Foodborne Diseases Centers for Outbreak Response Enhancement) program. FoodCORE sites are supported in part by USDA-FSIS and the Association of Public Health Laboratories. These sites work together to develop new and better methods to detect, investigate, respond to, and control multistate outbreaks of foodborne diseases. New York City conducted an enhanced epidemiologic investigation, which resulted in the identification of suspect food items that might have been a source of this outbreak. These suspect food items were collected for testing and the outbreak strain was found in “kosher broiled chicken liver” products.

Be careful in preparing foods: 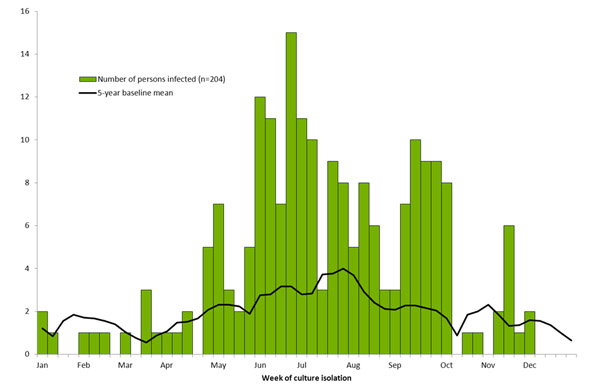