CDC is collaborating with public health officials in two states and the U.S. Food and Drug Administration (FDA) to investigate an outbreak of Salmonella infections, serotype Typhi. Salmonella Typhi is the bacterium that causes typhoid fever. Typhoid fever is a very rare illness in the United States among non-international travelers and can cause serious symptoms, often times requiring hospitalization. Typhoid fever is contracted when food and water are contaminated by an infected individual and are then consumed by other people. Investigators are using DNA analysis of Salmonella bacteria obtained through diagnostic testing to identify cases of illness that may be part of this outbreak.

As of 9:00am EDT on August 20, 2010, a total of 9 individuals infected with a matching strain of Salmonella serotype Typhi have been reported from 2 states since May 25, 2010. The number of ill persons identified in each state with this strain is as follows: CA (5) and NV (4).

Among persons with reported illness onset dates available, illnesses began between April 10, 2010, and July 25, 2010. Infected individuals range in age from 4 to 31 years old and the median age is 21 years. Sixty-seven percent (67%) of cases are female and 100 percent report Hispanic ethnicity. Among 9 patients with available clinical information, 7 (78%) were hospitalized. Eight (89%) of 9 patients reported no international travel in the 60 days prior to illness onset. As of August 20, 2010, no deaths attributed to this infection have been reported.

The outbreak can be visually described with a chart showing the number of persons who became ill each day. This chart is called an epidemic curve or epi curve. Illnesses that occurred after June 10, 2010, might not yet be reported due to the time it takes between when a person becomes ill, when laboratory testing is completed, when the diagnosis is confirmed, and when the illness is reported. For typhoid fever outbreaks, this takes an average of 8-10 weeks. This delay is denoted by the gray box on the epi curve.

Mamey, also called “zapote” or “sapote”, is a tropical fruit grown primarily in Central and South America. It is prepared by removing the inner seed and consuming the flesh raw, or adding it to milkshakes, jellies, or other foods or beverages. When preparing frozen mamey fruit pulp, it is peeled and mashed, and then consumed as a shake or smoothie. Frozen mamey fruit pulp can be purchased in grocery stores throughout the U.S., and packages have a 2-3 year shelf life.

Most persons infected with Salmonella Typhi develop high and sustained fever, headache, constipation, malaise, chills, and myalgia 2 to 5 weeks after infection. Infection is usually diagnosed by a blood culture. The illness can last from 3 to 4 weeks and infections may be severe or fatal if untreated. Typhoid fever should be treated with appropriate antimicrobial medications. More general information about Salmonella Typhi can be found here.

Persons infected with the outbreak strain of Salmonella Typhi, by state, as of August 20, 2010 (n=9) 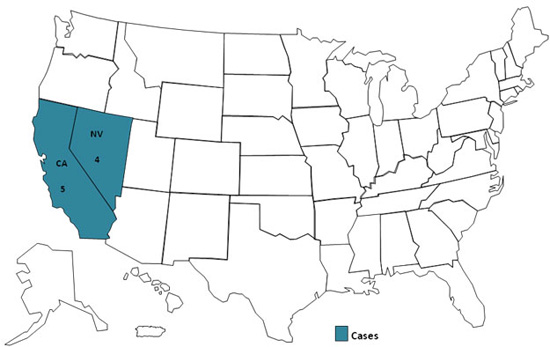 As of August 20, 2010, a total of 9 individuals infected with a matching strain of Salmonella serotype Typhi have been reported from 2 states since May 25, 2010. The number of ill persons identified in each state with this strain is as follows: CA (5) and NV (4).

Persons infected with the outbreak strain of Salmonella Typhi, by date of illness onset* 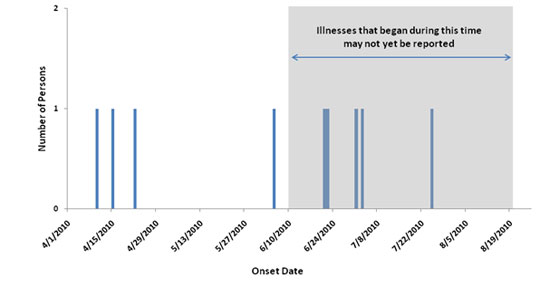