To open a 2 x 2 table, select StatCalc > Tables (2 x 2, 2 x n) from the Epi Info™ main menu. The table has Exposure on the left and Outcome across the top. Not all textbooks and articles use the same conventions. Carefully observe the labels and transpose data items if necessary. Below the table, the statistics populate as Exposure and Outcome data are entered and summary results populate in stratified analyses to the right of the table. Each stratum in a dataset must be entered individually in corresponding tabs located at the top of page. StatCalc is capable of performing calculations on up to nine different strata.

Single 2 x 2 tables frequently are used in epidemiology to explore associations between exposures to risk factors and disease or other outcomes.

Given a yes-no or other two-choice response describing disease and another describing exposure to a risk factor, StatCalc produces several kinds of statistics that test for relationships between exposure and disease.

Generally, an association is suggested by an odds ratio or risk ratio with a confidence interval larger or smaller than 1.0.

Note: Confidence intervals are designated by the Lower and Upper columns in the statistical tables.

The further the odds ratio or risk ratio is from 1.0, the stronger the apparent association. Statistical significance can be assessed by p-values for the chi square and Fisher exact tests that are small, <.05; or confidence limits for the odds ratio that do not include 1.0.

The expected value of a cell is the product of the marginal totals for that cell divided by the grand total for the table. If any expected value is less than five, it is recommended you use the Fisher exact test results and the exact confidence limits. If the numbers in the table are all large, the other tests should indicate nearly the same result.

The following example investigates a hypothetical study exploring the relationship of artificial sweetener use with bladder cancer. 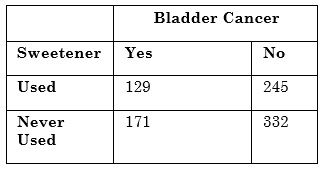 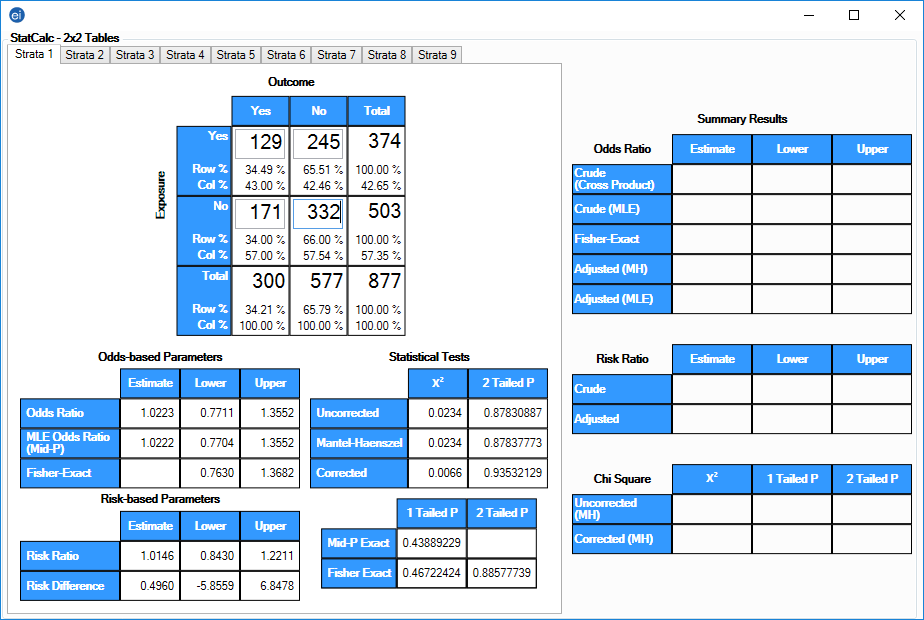 The odds ratio of 1.02 and the confidence limits that include 1.0 fail to provide evidence of any association between sweetener use and bladder cancer (Schlesselman JJ. Case-control studies. New York:  Oxford University Press, 1982).