Zika virus (ZIKV) is a flavivirus (family Flaviviridae), an RNA virus primarily transmitted by Aedes mosquitoes. These mosquitoes generally bite during the day, with peak times in the morning and early evening. These mosquitoes also transmit dengue, chikungunya and yellow fever viruses. Transplacental (vertical) and sexual transmission of the virus have been documented, as well as transmission by blood transfusion. Although Zika virus has been recovered in human milk, transmission through breastfeeding has not been definitively demonstrated.

The risk of a pregnant woman acquiring a primary infection is the same as that of other adults. Symptoms of ZIKV infection are generally mild, non-specific and self-limited, lasting two to seven days. Symptoms vary and might include maculopapular rash, low-grade fever, conjunctivitis, muscle and joint pain, arthritis, malaise and headache. However, a large percentage of infections are asymptomatic.

The most concerning feature of ZIKV infection is maternal infection during pregnancy that poses a risk of congenital ZIKV and resultant birth defects in the fetus. ZIKV infection should be suspected based upon symptoms and exposure (residence in or travel to an area with active ZIKV transmission) or sexual contact with a person who has been exposed, with confirmatory laboratory testing whenever possible.

* Noted in infants with structural brain anomalies only.

Since initial clinical descriptions were published, three additional features that appear to be unique to congenital infection with ZIKV compared with other established STORCH infections include paralysis of the diaphragm, neurogenic bladder and hypertensive hydrocephalus following severe microcephaly.

Other anomalies that are commonly reported with congenital ZIKV infection can be seen with congenital CMV but less so with other congenital infections, including cortical atrophy, corpus callosal agenesis/hypoplasia, cerebellar (or cerebellar vermis) hypoplasia, neuronal migration defects such as gyral anomalies or heterotopia, periventricular calcifications, hydrocephalus ex vacuo, glaucoma, and postnatal-onset microcephaly. Additional anomalies that are common to a number of congenital infections (including CZS) are microcephaly, hydrocephaly/ventriculomegaly/colpocephaly, calcifications of basal ganglia or unspecified regions, hearing loss, porencephaly, hydranencephaly, microphthalmia/anophthalmia, optic nerve hypoplasia, coloboma, and cataracts – these anomalies cannot reliably be used to differentiate among congenital infections.

Primary ZIKV infection during the first and early-second trimesters of pregnancy is more commonly reported in infants with more adverse outcomes. Infection in the third trimester is associated with less severe defects of the brain and eyes. Milder cognitive effects such as learning disabilities have also been reported but are not yet linked to a specific trimester of exposure. Congenital ZIKV infection has been associated with other adverse birth outcomes such as miscarriage, stillbirth and neonatal death.

Fig.56. Clinical findings in the infant

Lateral views showing collapse of the cranium and extreme reduction in height of the cranial vault. 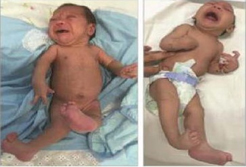