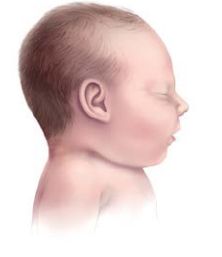 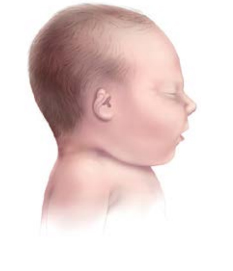 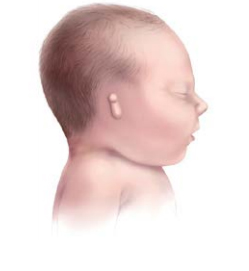 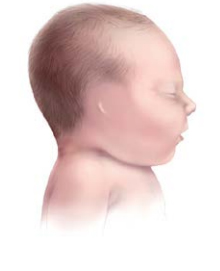 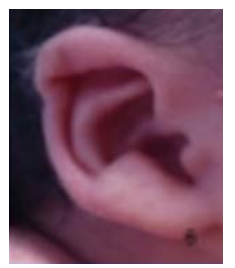 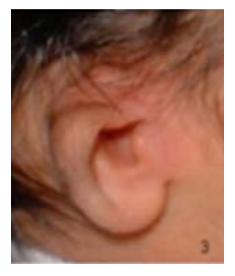 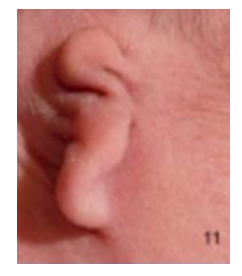 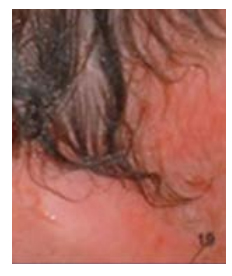 Microtia/anotia is a congenital malformation of the ear in which the external ear (auricle) is either underdeveloped and abnormally shaped (microtia) or absent (anotia). The external ear canal might be atretic (absent). The spectrum of severity in microtia ranges from a measurably small external ear (defined as longitudinal ear length more than two standard deviations below the mean, or approximately 3.3 cm in the term newborn) with minimal structural abnormality, to an ear that consists of few rudimentary structures and an absent or blind-ending external ear canal.

Based on morphology, microtia/anotia has been categorized (29) in the following four categories (see Fig. 4.13):

Microtia is usually unilateral (in which case it occurs more often on the right side). If bilateral, the severity can vary between the left and right sides.

Note that an additional digit could be added to specify the degree of microtia:
Q17.21 First degree (excluded in most programmes)
Q17.22 Second degree
Q17.23 Third degree

Prenatal. Microtia/anotia is easy to miss prenatally. Delineating the position and shape of the ear might require three- dimensional ultrasound. Even if prenatal ultrasonography suggests microtia/anotia, the diagnosis should always be confirmed postnatally. When such confirmation is not possible – due, for example, to termination of pregnancy or unexamined fetal death – the programme should have criteria in place to determine whether to accept or not accept a case based solely on prenatal data.

Postnatal. Microtia/anotia can be easily recognized and classified based on the newborn physical examination. However, detection of middle and inner ear abnormalities, commonly associated with the more severe degrees of microtia, will require advanced imaging (CT or MRI scan), surgery or autopsy. Because microtia (second degree and above) is associated with hearing loss, hearing should be evaluated as soon as possible, ideally in the newborn period, so that appropriate management can be put in place.

Microtia/anotia is an isolated finding in 60–80% of infants. For this reason, it is crucial to report all findings and obtain good clinical photographs for expert review. Of note, microtia/anotia can occur in conjunction with other anomalies and syndromes, especially those involving the mandible and face. Such conditions include the oculo-auriculo-vertebral spectrum (OAVS) and Goldenhar“syndrome”(Q87.04), as well as genetic syndromes, such as Treacher-Collins syndrome (Q87.0A) and trisomy 18 (Q91.0), or teratogenic, such as retinoic acid embryopathy.

Non-genetic risk factors for microtia/anotia include maternal pregestational diabetes, and maternal use of isotretinoin (Accutane®), thalidomide or mofetil (CellCept®), taken periconceptionally or early in pregnancy.

The reported prevalence of microtia/anotia varies between 1 in 3000 to 1 in 20 000 births. The prevalence might vary by country and race/ethnicity but this is likely dependent on what forms of microtia are included in studies. Prevalence is reported to be higher in males than females.