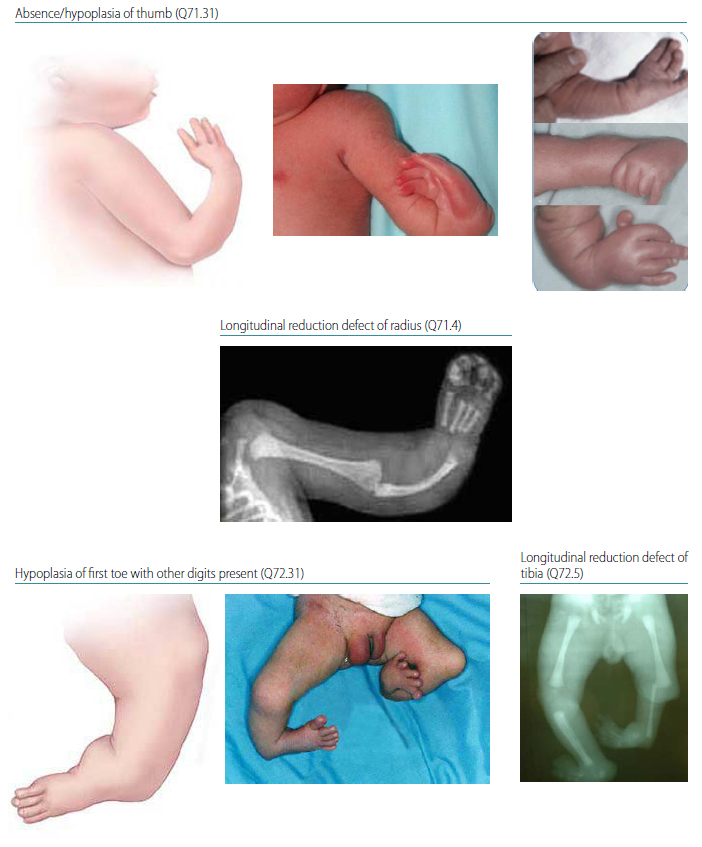 Radiographs are strongly recommended to confirm the diagnosis and characterize the bone anatomy.

When this is not possible (e.g. termination of pregnancy or unexamined fetal death), the programme should have criteria in place to determine whether to accept or not accept a case based solely on prenatal data.

Radial deficiency is often associated with hypoplasia or aplasia of the thumb and a bowing of the ulna (so-called radial club hand, angulated to the radial side of the wrist). Isolated thumb hypoplasia or triphalangeal thumb is the mildest manifestation of a preaxial deficiency.

Radial deficiencies are commonly associated with other anomalies such as in the VATER/VACTERL association, as well as several genetic syndromes. Some possible genetic diagnoses include trisomy 18, Fanconi anaemia, Holt-Oram syndrome and TAR syndrome. Of note, several genetic conditions with radial deficiency present also haematologic abnormalities (Diamond-Blackfan anaemia, Fanconi anaemia, TAR syndrome), some of which can be suspected with simple blood tests (although normal findings do not exclude the diagnosis).

Thalidomide and valproate are known teratogens associated with longitudinal preaxial defects (as well as other types of limb deficiency).

Absence of the tibia and preaxial polydactyly of the first toe is more common among infants of diabetic mothers. Absence of the tibia is also part of the spectrum of skeletal effects produced by exposure to thalidomide. The affected child would usually have other skeletal and visceral anomalies.

Prevalence of preaxial limb deficiencies is around 0.75 per 10 000 births. It is the second most prevalent limb deficiency subtype, after transverse terminal defects.