Hypoplastic left heart “syndrome”(HLHS) is a structural heart anomaly characterized clinically by variable degrees of heart failure in the newborn and anatomically by an underdeveloped left side of the heart, especially the left ventricle and aorta (see Fig. 4.20). Key findings in HLHS include a small left ventricle; a small, narrowed or atretic mitral valve or aortic valve; and an underdeveloped ascending aorta. For these reasons, the heart is unable to sustain systemic circulation, especially after the ductus arteriosus closes. 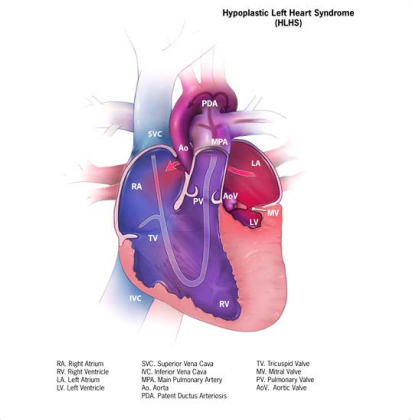 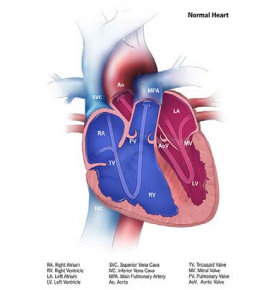 Prenatal. HLHS can be suspected and diagnosed prenatally. The basic four-chamber view of the heart – which is included in the standard second trimester obstetric ultrasound scan – can readily identify conditions that dramatically affect the ventricles, including HLHS. Prenatal confirmation is reliable if done by a paediatric cardiologist with a sufficiently detailed prenatal echocardiographic exam. However, prenatal diagnoses should be confirmed postnatally; for example, by echocardiography.

Postnatal. Echocardiography has largely superseded other imaging techniques. Newborn screening via pulse oximetry – which is based on the non-invasive detection of low peripheral oxygen saturation – is effective in detecting HLHS as long as the condition decreases the blood oxygen saturation below the cut-off for newborn screening testing. Note that HLHS, especially in the presence of a widely open ductus arteriosus, might be missed in the early newborn period and could become clinically obvious only after the ductus closes, which might happen after discharge from the nursery or birthing centre.

In HLHS, the clinical norm is early-onset heart failure (cardiogenic shock). The timing of heart failure varies. An ASD and a patent ductus arteriosus can allow some circulation of oxygenated blood to the body for a period of time (usually not more than a few days in the case of a patent ductus arteriosus). When the ductus closes, the clinical status of the newborn quickly deteriorates. Some infants develop signs and symptoms of congestive heart failure and shock (systemic hypoperfusion) very early, whereas others might have a “normal” physical exam in the first day of life, and then rapidly decompensate later. The timing of symptoms depends on the evolution of pulmonary vascular resistance, the closure of the ductus arteriosus, and the size of the ASD.

Because blood hypoxygenation is often present before clinical signs and symptoms appear, newborn screening via pulse oximetry is critically important for early detection, and can prompt treatment. Other cases can be suspected because of absence of pulses.

Though more than 75% of all HLHS cases are isolated, HLHS can be associated with genetic conditions. Familial forms are increasingly recognized. When including all left-sided lesions, the frequency of left-sided heart anomalies is as high as 10–12% in some families in which a child was born with HLHS. For this reason, echocardiographic screening of family members is suggested.

Birth prevalence of HLHS is approximately 1 in 4000 births. HLHS is slightly more common in males.