In primary syphilis, a sore or multiple sores appear at the site where the bacterium entered the body – typically near the genitals, the rectum or the oral cavity. The sores are usually firm, round and painless. In secondary syphilis, fever, swollen lymph nodes and skin rash, and wart-like genital lesions (condyloma lata) can be seen. In the latent stage, there are no signs or symptoms. In tertiary syphilis, several medical problems affecting the heart, neurologic system and other organs can be seen. Individuals with the infection move from one stage to the next in the absence of treatment.

Fig. 5.3. Clinical findings in the infant 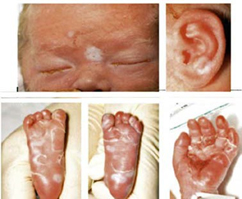 Typical desquamating and maculopapular skin lesions; punched out, pale, blistered lesions mainly on ears and nasal bridge, and desquamation of feet and palm. 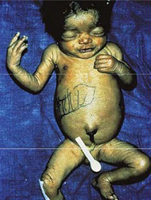 Hepatosplenomegaly and jaundice in an infant with congenital syphilis. Black markings on infant indicate liver margins. 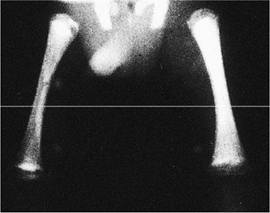 X-ray of bone abnormalities, syphilitic metaphysitis in an infant with diminished density in the ends of the shaft and destruction at the proximal end of the tibia (right).

WHO recommends universal screening of pregnant women for syphilis. Diagnosis of congenital syphilis primarily relies on the diagnosis and treatment of the pregnant mother. Serum-based tests available for maternal diagnosis of syphilis include:

Any of the following laboratory or radiography findings in the infant are consistent with a clinical diagnosis of congenital syphilis:

The global surveillance case definition† for congenital syphilis is given below:

† Surveillance case definitions might vary by country and available resources.