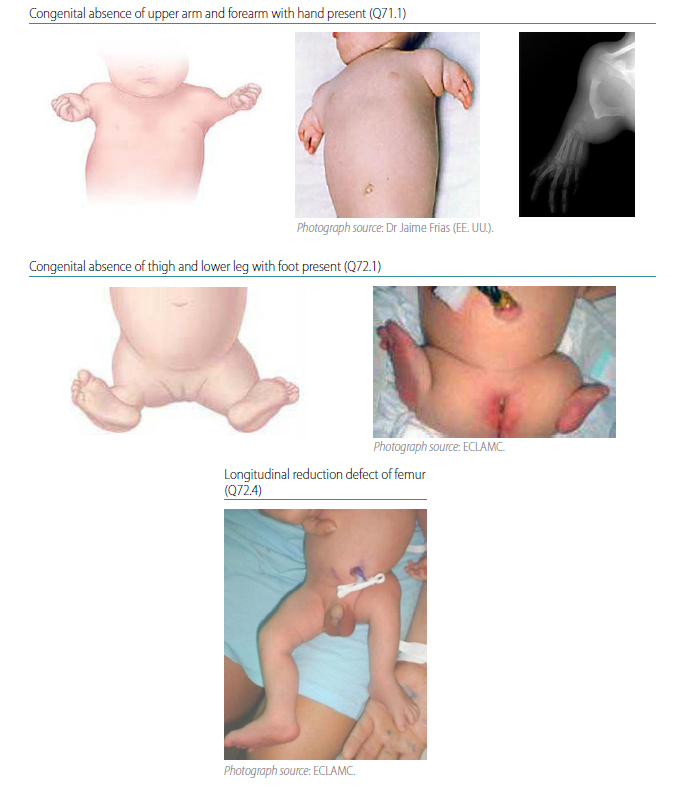 Transverse intercalary limb deficiencies are characterized by the absence of proximal or middle segments of a limb with all or part of the distal segment present. Radiographs are strongly recommended to confirm the condition and characterize the bony anatomy.

Prenatal. Transverse intercalary limb deficiency can be suspected prenatally, but is easily missed or misdiagnosed. Cases identified or suspected prenatally should be confirmed postnatally before inclusion in the surveillance programme. When this is not possible (e.g. termination of pregnancy or unexamined fetal death), the programme should have criteria in place to determine whether to accept or not accept a case based solely on prenatal data.

Postnatal. The newborn examination confirms the diagnosis of intercalary limb deficiency and distinguishes it from other limb deficiencies (such as amelia). A careful clinical examination and documentation, aided by imaging (photos and radiographs), are essential for an accurate and complete diagnosis.

Note that the English translation for the term “phocomelia” is considered pejorative and should not be used. Translation from Latin to English alludes to the shape of the limb resembling that of a flipper on a seal.

A teratogen that can cause intercalary limb deficiencies is thalidomide. Maternal pregestational diabetes has been associated with femoral hypoplasia-unusual facies syndrome (now more commonly called femoral-facial syndrome). This condition is characterized by unilateral or bilateral deficiency of femurs, with variable deficiencies of other long bones.

The prevalence of intercalary limb deficiencies is around 0.45 per 10 000 births.