Cytomegalovirus (CMV) is a very common virus of the Herpesviridae family. Most people are infected at some point during their lifetime. CMV is transmitted through close person-to-person contact with infected secretions, including urine, saliva, blood transfusions, semen, cervical secretion and breast milk. Women caring for children (such as mothers and teachers) are at high risk as infected children can shed the virus in their urine and saliva for months and even years after infection. Congenital cytomegalovirus infection (cCMV) occurs when the virus crosses the placenta during pregnancy and infects the fetus. The highest risk of fetal infection is among mothers experiencing a primary infection during the first and second trimesters of pregnancy. Fetal transmission can also occur if a pre-existing infection is reactivated during pregnancy (i.e. non-primary infection) or if the mother is infected with a new strain of CMV; however, the risk of transmission is much lower. Higher rates of cCMV also occur in the offspring of women who are immunocompromised; for example, due to HIV infection. The prevalence of cCMV infection ranges from 0.2–0.7% of live births in high-income regions to 1–6% in low- and middle-income regions.

CMV infection is very common and in most healthy people presents with mild flu-like symptoms or is asymptomatic (subclinical infection).

Most infants with cCMV will not have signs or symptoms of cCMV disease at birth and will remain well. Infants born with symptoms – which might include growth restriction, ascites/hydrops, hepatosplenomegaly, jaundice, petechiae, hepatitis (raised transaminases or bilirubin), thrombocytopenia, anaemia, microcephaly, seizures, chorioretinitis and sensorineural hearing loss – are at the highest risk of poor neurodevelopmental outcomes. Rarely, infants with cCMV have severe microcephaly that is characterized by marked reduction in cranial vault height with overlapping sutures and redundant scalp with rugae or folds. This presentation is indistinguishable from congenital Zika syndrome by physical examination alone (see Fig. 5.4).

Long-term sequelae: While the majority of infants born with cCMV will not have any long-term sequelae, 10–20% will go on to have neurodevelopmental disabilities, including sensorineural hearing loss, epilepsy, cerebral palsy, visual impairment and learning difficulties. CMV is the most common infectious cause of sensorineural hearing loss and neurodevelopmental abnormalities in high-income settings, and is likely more common, but under-identified, in low-resource settings. cCMV is a known cause of stillbirth and neonatal death.

Fig. 5.4. Clinical findings in the infant 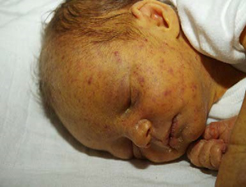 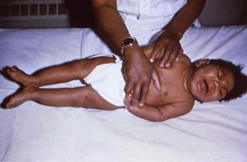 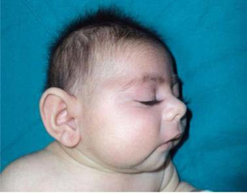 Microcephaly in an infant with cCMV.

Laboratory: Maternal and fetal testing
Routine CMV screening of pregnant women is not currently recommended. However, pre-pregnancy or early- pregnancy screening with CMV IgG might be used for women at high risk of infection. These results can also distinguish primary infection from reactivation/reinfection. Primary CMV infection is diagnosed based on the new appearance of CMV-specific IgG in a previously seronegative woman, or detection of CMV IgM antibody with low IgG avidity.

A diagnosis of fetal CMV infection can be made after 20–21 weeks of gestation, and at least six weeks from the time of maternal infection, by testing amniotic fluid for CMV using nucleic acid amplification tests (NAATs, which include, but are not limited to, reverse transcriptase polymerase chain reaction [RT-PCR], real-time RT-PCR, quantitative RT-PCR and next-generation sequencing).

Laboratory: Infant testing
Where cCMV infection is suspected, or to differentiate from other congenital infections such as CZS, the diagnosis of cCMV in an infant must include NAATs of saliva, urine or both within the first three weeks of life.

Where cCMV infection is suspected, or to differentiate from other congenital infections such as CZS, the diagnosis of cCMV in an infant must include NAATs of saliva, urine or both within the first three weeks of life. For the purposes of surveillance of cCMV infection as a cause of birth defects, the surveillance system should record the birth defects presenting in the child, which might include microcephaly, other brain malformations and functional deficits, including sensorineural hearing loss. Congenital contractures and a distinctive pigmentary retinopathy associated with CZS are features that clinically differentiate it from cCMV.