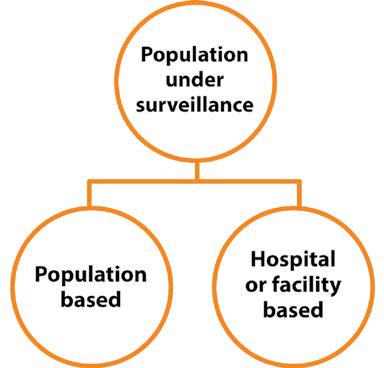 In contrast, the source population for a hospital-based programme typically cannot be defined accurately. The coverage for a hospital-based surveillance programme is usually at least a few hospitals or clinics in one geographic region. However, there generally are no distinct catchment areas for specific hospitals and, thus, no defined denominator of the entire source population from which all cases are ascertained. Hospital-based programmes work best when they capture most of the population of interest in a geographic region.

Population-based congenital anomalies surveillance programmes collect data from an entire source population (fetuses or neonates with a congenital anomaly and the total number of births) born to resident mothers living in a defined catchment area (geographical area), within a defined time period.

Thus, the denominator used to calculate prevalence in a population-based programme consists of births to resident mothers. The corresponding numerator consists of fetuses or neonates with congenital anomalies born to resident mothers. Because of this definition, all births are collected in a population-based programme, meaning not only births occurring in hospitals or maternity hospitals but also those occurring at home.

Most congenital anomalies surveillance programmes use the mother’s primary residence at the time of delivery or pregnancy termination to define the source population among which the cases occur. For example, residence can be defined as the mother’s primary address during the 3 months prior to pregnancy and the first trimester of pregnancy. However, the crucial issue is that the definition of resident status used for cases (the numerator) must be the same as that used for all births (the denominator). Fig. 3.2 illustrates an example of a population-based programme. All fetuses or neonates identified with a congenital anomaly born to mothers residing within the catchment area (dashed area) are included in the programme (labels 2 through 7 in Fig. 3.2 ). Similarly, a fetus or neonate with a congenital anomaly who is born outside of the defined catchment area (including one who is born at home while the mother is visiting a family member living outside of the catchment area, for example) would still be included if the mother is herself a resident of the catchment area ( labels 1, 8, 9 and 10 in Fig. 3.2 ). Fetuses or neonates identified with congenital anomalies and born to non-resident mothers are not included. Data sources include all health facilities within the catchment area where births occur, vital records (e.g. birth and death registries), referral treatment centres for individuals with congenital anomalies (up to the defined age period for inclusion), administrative databases, and any health-care facility that identifies a fetus or neonate with a congenital anomaly.

The steps for calculating prevalence, and information on how to define the denominator, are described later on in this chapter.

The denominator used to estimate prevalence in a hospital-based programme consists of births occurring in the participating hospitals. The numerator (cases) typically consists of affected live births and stillbirths occurring in these hospitals. Fetuses or neonates with congenital anomalies who are delivered at home are not included, even if they are identified and captured in participating hospitals (because they are not part of the denominator).

Because the inclusion in a hospital-based programme depends on where the birth occurred rather than on the residence at birth, the source population of cases is difficult to establish. This becomes an issue in the surveillance of congenital anomalies when referral patterns skew the likelihood that an affected fetus or neonate is delivered at a hospital in the system. Thus, a major concern in hospital-based programmes is referral bias of cases – that is, the selective delivery of affected pregnancies in hospitals participating in the hospital-based programme. This referral bias can also vary over time, either because referral patterns change or because hospitals are added or removed from the surveillance programme. This, in turn, adds to the problem of using these hospital-based data longitudinally for monitoring.

Ascertainment of fetuses or neonates identified with congenital anomalies in participating hospitals can vary. While some are primary hospitals, others may be specialized centres for certain conditions, or for prenatal diagnosis and care, and serve as referral hospitals for patients outside the catchment area. As discussed, such hospitals would disproportionately serve fetuses or neonates with congenital anomalies, thus introducing bias in the calculation of their birth prevalence.

The magnitude of bias may change over time, with fluctuations in referral patterns and the proportion of births occurring outside the hospital setting. This could lead to changes in rates that have nothing to do with the underlying prevalence, but are the result of referral patterns. Also, the bias will depend on how many hospitals or facilities are included – all, half or only a small percentage.

Although population-based and hospital-based surveillance programmes have clear differences, there are some characteristics that are common to both. These include: