Accounting for Differences in Exposure

What is the ARM?

How is the ARM different from the SIR?

The type of reliability-adjustment incorporated into the ARM relies on methodological concepts dating back to 1977, and more specifically, has been used in CMS performance measurement since 2007 (for instance hospital 30-day mortality following acute myocardial infarction). Furthermore, the need for reliability-adjustment in assessing hospital performance has been recommended in a white paper published by a Committee of Presidents of Statistical Societies commissioned and published by CMS.

Facilities with No ARM Score

Beginning in December 2019, the “Reliability-Adjusted Ranking” dashboard will be available for ACHs. The new dashboard is accessible underneath the existing “TAP Strategy Dashboard” on the NHSN home page in the NHSN Application.

This initial release will include data for 2018, with additional years added in future releases. Reliability-adjusted rankings for six HAIs (CLABSI, CAUTI, MRSA, CDI, SSI-COLO, SSI-HYST) will be displayed in a bar graph (example below). During this initial release, the rankings are available for use by ACHs only and are not made available to groups within NHSN, nor used by CMS pay-for-reporting or pay-for- performance programs.

ACHs are encouraged to review their reliability-adjusted rankings. 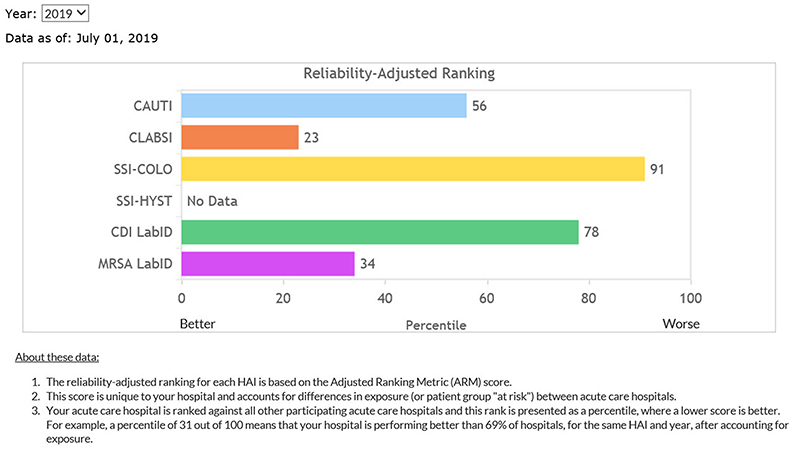