Targeting a Reduction in Fluoroquinolone Use within a Community Hospital

Wilson Medical Center is a 145 bed facility located in Eastern North Carolina. This community hospital has a robust surgery program and provides inpatient care for adult and pediatric patients.  The stewardship team is based in the pharmacy with the support of an Infectious Diseases (ID) physician who is compensated for stewardship efforts. The ID physician is also the sole ID provider for the facility providing inpatient care and clinic-based follow-up when needed.

Data were submitted to the NHSN AU Option beginning in 2016.  At that time, the all antibacterial agents 2014 baseline SAAR for the facility was 1.498. The highest SAAR values were noted for the broad spectrum antibacterial agents predominantly used for community-acquired infections (BSCA) category in both the ICUs and wards (SAARs of nearly 2.0 or greater for adult ICUs and wards). This category, specifically fluoroquionolone use, was an area of high use that was previously suspected and the data suggested the need house-wide intervention.

These data were discussed with the stewardship team.  After brainstorming reasons for use, empiric therapy and long treatment durations were identified as key targets. The stewardship team prepared empiric treatment guidelines that were intentionally quinolone sparing. These guidelines were approved by the Pharmacy and Therapeutics (P&T) committee, providers were educated and order sets were updated to reflect the new recommendations during the summer of 2016.

After the initial intervention, the stewardship team continued to educate new providers and follow antibiotic use trends for agents used for community-acquired infections. 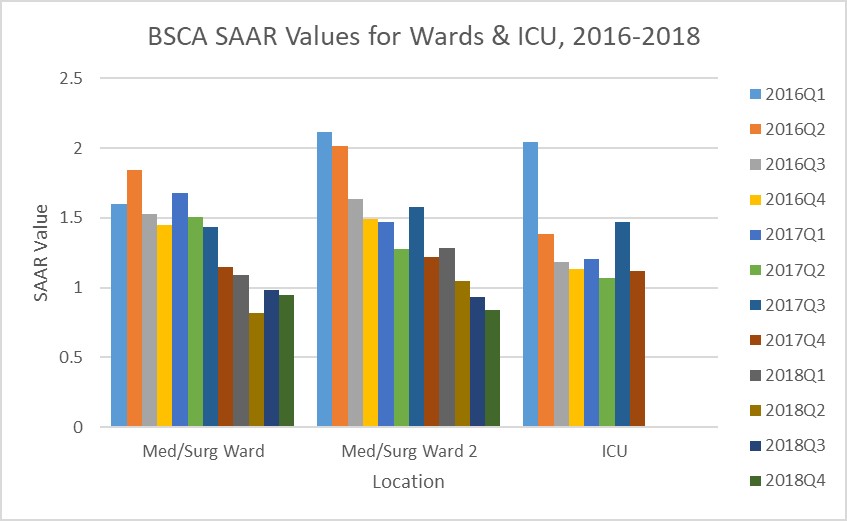 Between the first quarter of 2016 and the fourth quarter of 2018, the BSCA SAAR values decreased consistently in each area of the hospital (Figure. Note: In Q1 2018, due to changes in the patient population of the location, the ICU location was remapped as a mixed acuity unit and was therefore no longer able to receive SAARs.) These trends were also noted in other routine pharmacy metrics.

These data are reported to the P&T committee twice annually as part of a formalized stewardship report. Data regarding antibiotic use are also shared with front-line providers regularly at noon conference gatherings and other education forums. Overall, the all antibacterial agent SAAR for the facility, which was initially 1.498 decreased consistently to 1.129 at the end of fourth quarter 2018.

The stewardship team continues to monitor these efforts and plans to address broad spectrum antibacterial agents predominately used for hospital-onset/multi-drug resistant infections on the adult wards, now the highest SAAR category in the facility, after the decrease in BSCA SAAR values in both medical/surgical wards and the ICU.

Note: The findings and conclusions in this report are those of the authors and do not necessarily represent the official position of the Centers for Disease Control and Prevention.