Chest pain, high fever, cough, and extreme fatigue suddenly consumed Kevin, who experienced a whirlwind of confusion and emotions as he tried to get treated for his mysterious illness. “It was debilitating in the early stages. I remember I could not climb the stairs to my office. Clearly, it had a huge impact on my life,” he said.

Kevin used a telemedicine service to video chat with a doctor, who diagnosed him with pneumonia and prescribed a common antibiotic for bacterial infections. But Kevin wasn’t getting better after a few days, so he went to see his family doctor, who prescribed a different antibiotic. Still, his fever persisted. He went to a pulmonologist—a lung specialist—for another opinion. Images of Kevin’s lungs showed a large mass invading almost a third of his left lung. The doctor thought it might be lung cancer, which was terrifying news. However, Kevin wasn’t convinced. “I always had a suspicion that my chance of having lung cancer was a low probability,” he said. 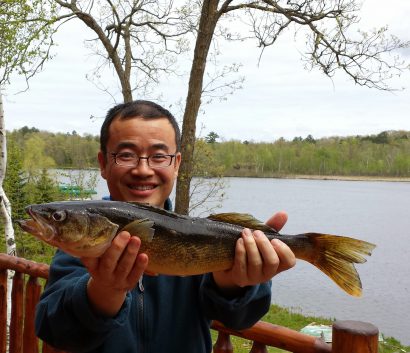 Kevin on a fishing trip on a Minnesota lake.

Nearly a month after his symptoms started, a lung biopsy showed that, luckily, Kevin didn’t have lung cancer. He had blastomycosis, an infection caused by a fungus in the environment in certain regions of North America, mainly in the midwestern, south-central, and southeastern states. “[Not having lung cancer] was a huge relief for the entire family…but blastomycosis is a pretty scary condition as well,” he said.

Overall, blastomycosis is uncommon, and can be treated with antifungal medication. Thankfully, Kevin began to feel better right away. “Once I started treatment, the overall effects were almost immediate. My fever went down, my cough was slowing down, and after a few x-rays, you could clearly see my lungs were improving,” he said.

A few months before he got sick, Kevin spent time fishing and canoeing on a trip to northern Minnesota, an area where the fungus that causes blastomycosis is known to live. Though his doctor said this might have been where Kevin was exposed, it’s difficult to know for sure.

Even with a background in the medical field, Kevin struggled to find information about blastomycosis and found it difficult at times to navigate the healthcare system. “I certainly did not know about it before I got sick. Even though I’m a medically trained bioengineer, it was challenging to find clear information about this disease,” he said. His experience shows the need for greater awareness about this debilitating yet treatable disease.

Six months later, Kevin had fully recovered and returned to his daily routine, including his much-missed passion for table tennis. He remains positive about his experience and thankful that his infection was easily treatable, knowing that his diagnosis could have been much worse. “I’m grateful that there’s a good treatment out there for this disease for anyone who gets it. Once you get the right diagnosis, the treatment is very effective,” he said.

Note: Kevin asked that we not use his real name to protect his privacy.