Mycetoma is a disease caused by certain types of bacteria and fungi found in soil and water. These bacteria and fungi may enter the body through a break in the skin, often on a person’s foot. The resulting infection causes firm, usually painless but debilitating masses under the skin that can eventually affect the underlying bone. Mycetoma can be caused by bacteria (actinomycetoma) or fungi (eumycetoma). The number of people with mycetoma worldwide is not known, but there were 17,607 cases reported in a 2017 review of scientific articles between 1950 and 2017. The actual number of cases is likely substantially higher.

Mycetoma affects people of all ages and is more common in men. This disease primarily affects poorer people in rural regions of Africa, Latin America, and Asia that are located near the equator and have dry climates. People affected by mycetoma often live in remote areas where they have limited access to healthcare and medications. Mycetoma can cause severe physical disabilities that can force people to stop working and cause stigma.

Diagnosis requires laboratory evaluation of a biopsy, or small tissue sample, of the infected area. The treatment for mycetoma includes antibiotics or antifungal medicine, depending on whether the disease is caused by bacteria or fungi. Surgery is sometimes needed to cut away the infected tissue. Wearing shoes might help prevent mycetoma. 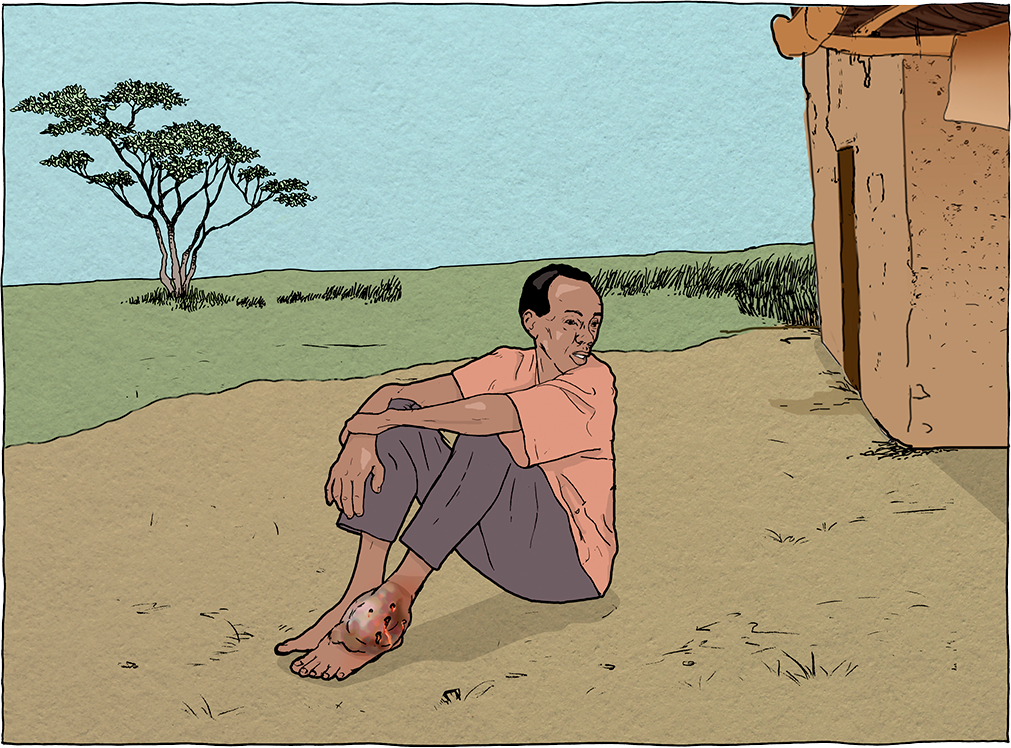 Man with a swollen foot caused by mycetoma.

Symptoms are similar for bacterial and fungal mycetoma. Both appear as firm, painless masses under the skin. These masses usually appear on a person’s foot but can form anywhere on the body. The mycetoma masses start small, but over time they can grow larger, develop oozing sores, and cause the affected limb to become deformed or unusable. If mycetoma is not treated or if treatment fails, it can spread to other areas of the body. Long-term mycetoma can eventually destroy the underlying muscle and bone.

Mycetoma is a health problem in equatorial regions of Africa, Latin America, and Asia known as the “mycetoma belt.” Fungal mycetoma (eumycetoma) is the most common type in Africa, while bacterial mycetoma (actinomycetoma) causes most cases in South and Central America and some Asian countries. 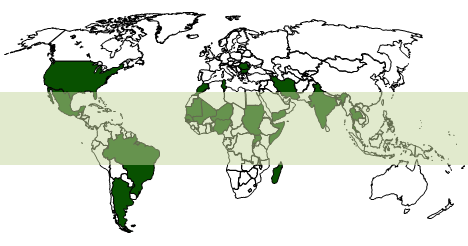 Countries shown in dark green indicate those in which cases of mycetoma have been reported in the medical literature. The mycetoma belt region is shaded in light green.

Mycetoma affects people of all ages and is more common in men. Many people with mycetoma work in agricultural jobs, such as farmers and livestock herders.

Health care providers and researchers believe that wearing shoes might prevent injuries that can lead to mycetoma. Shoes protect the feet while someone is walking or working outside in areas where the germs that cause mycetoma are common in water and soil. Early detection and treatment, before symptoms cause serious effects, can reduce disabilities from mycetoma and may cure the condition.

The bacteria and fungi that cause mycetoma live in soil and water. These germs can enter the body through wounds or other small skin injuries, like a thorn prick. It is not known why some people develop mycetoma and others do not, but aspects of the environment and living conditions are likely involved. Mycetoma does not spread between people.

Therapies that work against mycetoma are limited, may have to be taken for a long time, and can be expensive. The treatment for mycetoma depends on whether it is caused by bacteria (actinomycetoma) or fungi (eumycetoma).