Mycetoma is a rare implantation infection caused by any of several different types of microorganisms that causes progressively debilitating yet painless subcutaneous tumor-like lesions, usually on the extremities. Low-income agrarian populations in tropical regions are primarily affected; endemic areas are collectively called the Mycetoma Belt and include Venezuela, Chad, Ethiopia, India, Mauritania, Mexico, Senegal, Somalia, Sudan and Yemen.1 Mycetoma is caused by any or several of a diverse group of microorganisms including both bacteria and fungi, and the predominant etiologic agent varies by geographic region. Fungal mycetoma (eumycetoma) predominates in Africa, while bacterial mycetoma (actinomycetoma) causes the majority of cases in South and Central America and some Asian countries.2

Little is known about the global burden of mycetoma, transmission modes, risk factors or pathogenesis. In 2016, the World Health Organization added mycetoma to the list of 18 priority neglected tropical diseases, an important step toward better epidemiologic characterization of the disease and concerted efforts to improve diagnostics and treatment and to establish prevention recommendations.3, 4

Mycetoma is a chronic granulomatous disease with a progressive inflammatory reaction. Over the course of years, mycetoma progresses from small nodules to large, bone-invasive mutilating lesions. Mycetoma is usually caused when skin is repetitively broken and exposed to soil or water that contains the causal bacteria or fungi.3 Mycetoma presents as a triad of painless, firm subcutaneous masses, formation of multiple sinuses within the mass, and a purulent or seropurulent discharge containing sand-like particles called “grains,” that can be white, yellow, red, brown, or black. Because lesions are usually painless and slowly progressive, time from initial infection to initiation of care varies from months to years.5 Eumycetoma and actinomycetoma present virtually identically, although actinomycetomas progress to bone invasion more rapidly than eumycetomas. Actinomycetomas also occur more frequently on the chest, abdomen, and head compared with eumycetoma, which occurs primarily on the extremities.3 Secondary bacterial infection may be seen in mycetoma as well, further complicating treatment.3 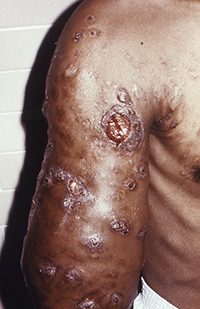 Actinomycetoma of the right upper arm caused by Nocardia brasiliensis 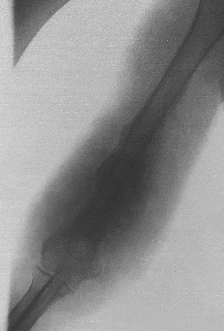 Anteroposterior radiograph of a patient’s right arm, revealing the bony involvement of the distal humerus in a case of actinomycetoma caused by Nocardia species 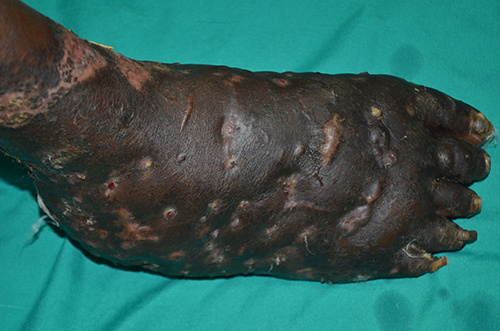 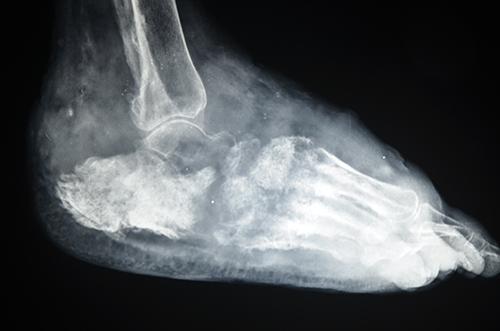 Proper treatment requires an accurate diagnosis that distinguishes actinomycetoma from eumycetoma. Culturing of grains obtained from deep lesion aspirates enables identification of the causal organism. Histopathology of deep biopsy specimens (deep swab or punch biopsy) stained with haematoxylin and eosin can diagnose actinomycetoma and eumycetoma. However, species identification cannot be made without culture. Currently, no serologic tests can reliably diagnose mycetoma.

In endemic areas, health care providers use ultrasound to distinguish mycetoma from other subcutaneous lesions. Radiology is also used, and in one study, radiology correctly identified 97% of 516 patients who were diagnosed by clinical exam and histopathology,6 suggesting that radiology can be helpful in evaluating the extent of disease as well as response to treatment in patients with laboratory evidence of mycetoma. In a recent study of 758 patients with suspected mycetoma skin lesions in rural Sudan, clinical evaluation and ultrasound helped identify evidence of mycetoma in 220 (29%) patients. Among these, all had surgical excision or amputation with biopsy and histopathological exam, which confirmed mycetoma in 192 (87%) patients.7 CT and MRI may also be used, with MRI being the preferred method.8 However, MRI and molecular assays are often not available in endemic areas. 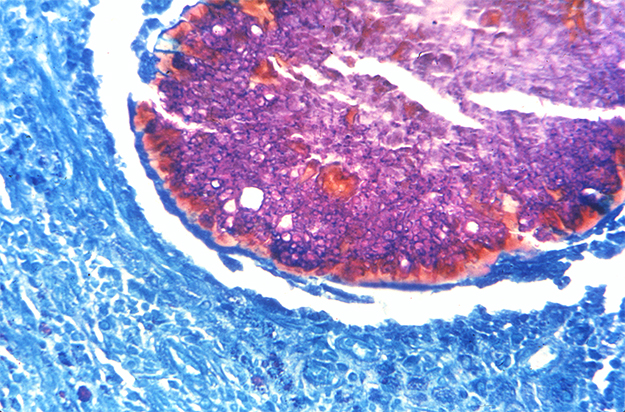 PAS-stained photomicrograph revealing the presence of the fungal organism Madurella mycetomatis in the form of vesicular granules. 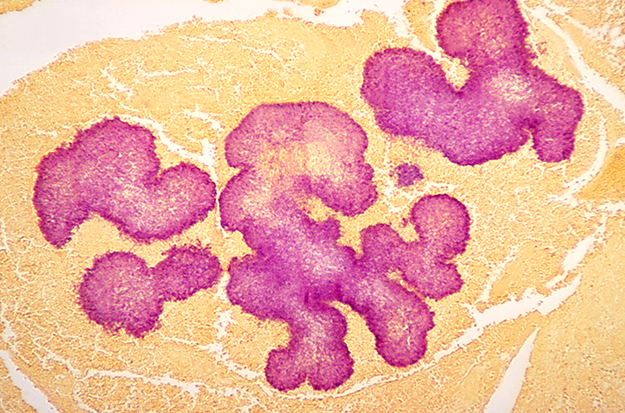 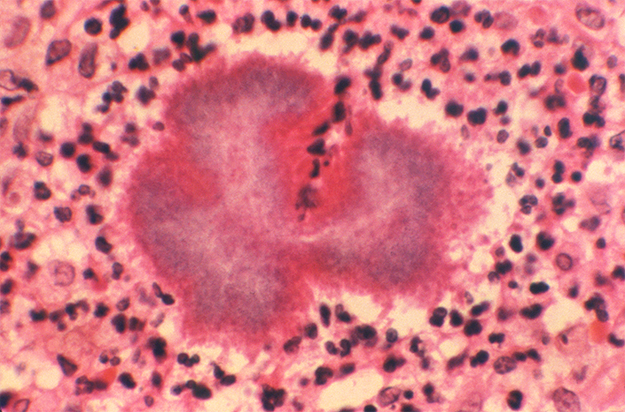 Hematoxylin-eosin (H and E) stained photomicrograph of a tissue sample of a mycetoma excised from a patient’s thorax due to the bacterium Nocardia brasiliensis. 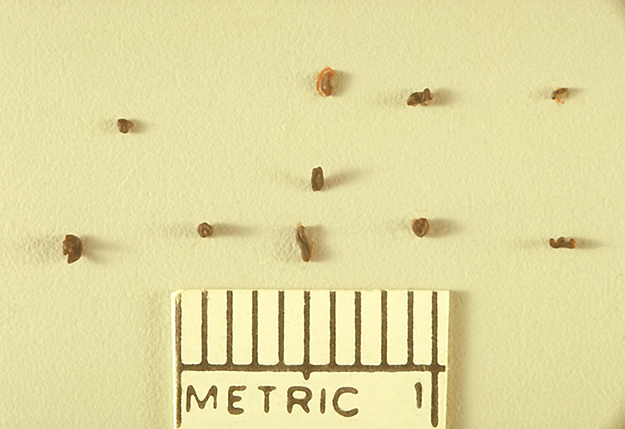 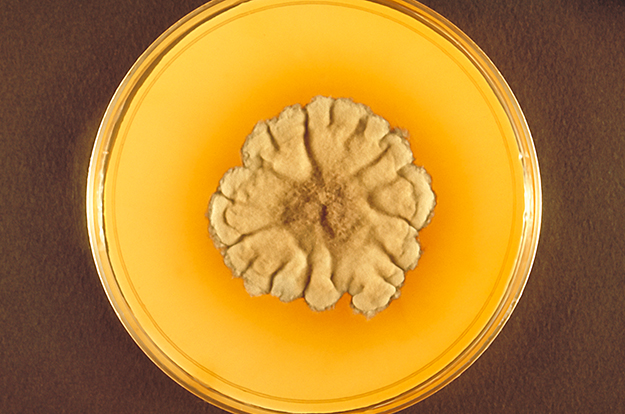 Treatment depends on identification of the causal organism, and requires long-term and expensive drug regimens.9 Actinomycetoma generally responds to medical treatment and surgery is rarely needed. Current first-line treatment is with cycles of co-trimoxazole (trimethoprim/sulfamethoxazole) for 5 weeks, supplemented with pulses of amikacin for 3 weeks, for as many as four cycles; cure rates exceed 90%.8, 9 Eumycetoma is less responsive to medical therapies, recurrence is common and surgical debridement or amputation may be required. Current recommended therapy is itraconazole or ketoconazole for 9-12 months, but cure rates as low as 26% have been reported and fungi can often still be cultured from lesions post-treatment.10 Fosravuconazole is being investigated as a potentially more effective antifungal treatment.8

Because the exact route of infection has not been confirmed, recommendations for prevention are based on avoidance of percutaneous inoculation of the infecting organism, believed by healthcare providers and researchers to be the most likely route of infection. Wearing closed-toed shoes and clothing that can protect from percutaneous injury are thought to be preventive.11 In addition, cleaning and disinfecting of skin wounds—should they occur in locations where mycetoma is seen—may also be preventive.12