Sporothrix brasiliensis is a fungus that is increasingly causing disease in cats and people in Brazil and parts of South America.

Sporothrix brasiliensis has been spreading over time
Before 1990, Sporothrix brasiliensis was only known to be in Southeastern Brazil, near Sao Paolo and Rio de Janeiro. By 2018, cases of sporotrichosis—a fungal infection caused by S. brasiliensis—had been identified in eight more states across southern and eastern Brazil. Between 1998–2016, over 4,500 cases spread by cats were identified.1 S. brasiliensis was also recently found in Argentina and Paraguay, and there is concern that it could spread to other countries through the movement of sick animals.2,3

Sporothrix brasiliensis in cats
Cats with sporotrichosis often have lesions on their faces, often around the nose. These lesions develop from wounds that occur during fights with an infected cat. Cats licking infected wounds on other parts of their bodies can also transfer the fungi to their faces and mouths.6

Sporotrichosis infections are often difficult to treat with antifungal medication.7 The main treatment is itraconazole, given by mouth at 8.3 to 27.7 mg/kg/day every 24 hours until signs and symptoms disappear. However, treatment takes many months, the infections often fail to respond to treatment, and side effects are common.8

Prevention
Veterinarians, animal caretakers, and the public should be careful when handling cats in Brazil and neighboring countries, especially those that appear sick or have obvious lesions.9 People can get sporotrichosis from infected cats even if the cat does not scratch or bite them. Some people have gotten sporotrichosis after touching an infected cat and then touching their eyes.10 Be cautious with unfamiliar animals and approach cats with care, even if they appear friendly. Limit contact between domestic and feral cats, especially those that appear sick. 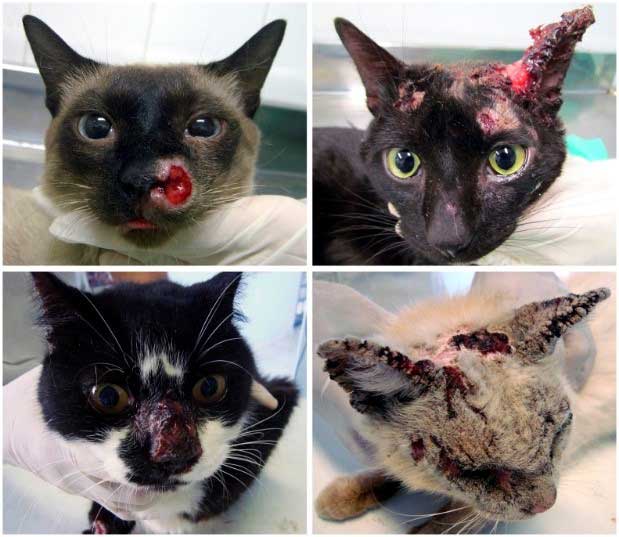 Cats with sporotrichosis often have lesions on their faces, often around the nose. Photo credit: Dr. Marconi Rodrigues de Farias.