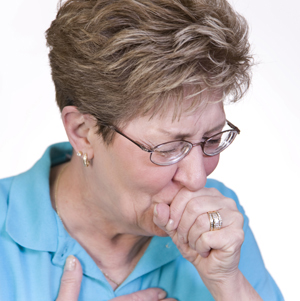 Cough is a common symptom of Cryptococcus infection in the lungs.

C. gattii usually infects the lungs or the central nervous system (the brain and spinal cord), but it can also affect other parts of the body. The symptoms of the infection depend on the parts of the body that are affected.1–3

A C. gattii infection in the lungs can cause a pneumonia-like illness. The symptoms are often similar to those of many other illnesses, and can include:

In the brain (cryptococcal meningitis)

C. gattii infection can also cause cryptococcomas (fungal growths) to develop in the lungs, skin, brain or other organs, causing symptoms in other parts of the body.

If you have symptoms that you think may be due to a C. gattii infection, please contact your healthcare provider.

How soon do the symptoms of C. gattii infection appear?

The incubation period of C.gattii is not well-established. A few studies have shown that symptoms of C. gattii infection can appear between two and thirteen months after breathing in the fungus, with an average of approximately six to seven months.4,5 However, for some people it may take even longer for symptoms to show up after breathing in the fungus; for example, one person didn’t develop symptoms until three years after traveling to an area where the fungus is known to live.6

Next: Learn about the people at risk and how to prevent >