Related Pages
How common is histoplasmosis?

In the United States, an estimated 60% to 90% of people who live in areas surrounding the Ohio and Mississippi River valleys (where Histoplasma is common in the environment) have been exposed to the fungus at some point during their lifetime.1 One study calculated the incidence of histoplasmosis in adults aged 65 years and older in the U.S. to be 3.4 cases per 100,000 population.2 Rates were highest in the Midwest, with an estimated 6.1 cases per 100,000 population.2 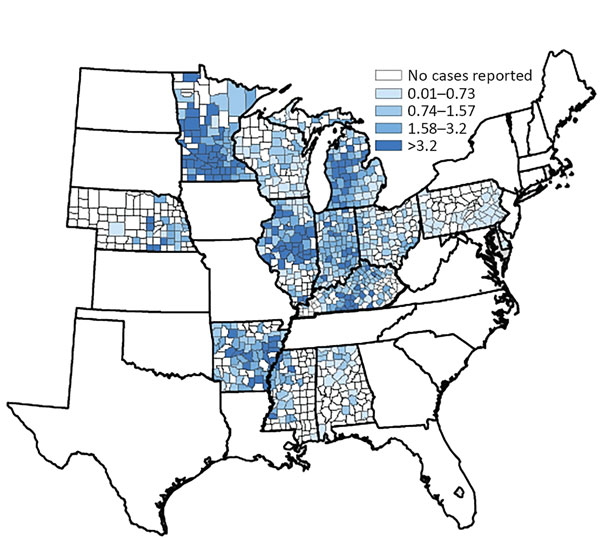 This map shows the incidence of histoplasmosis, by county (number of cases/100,000 population) for 12 states for which surveillance data were available, 2011–2014.3 Rates cannot be directly compared across states because different histoplasmosis case definitions were used.3

Histoplasmosis is reportable in certain states. Check with your local, state, or territorial public health department for more information about disease reporting requirements and procedures in your area.

Although most cases of histoplasmosis are not associated with outbreaks, histoplasmosis outbreaks linked to a common source do occasionally occur.6 Common-source histoplasmosis outbreaks often involve activities that disrupt soil, especially soil that contains bird or bat droppings. Examples of these types of activities include: construction,7 renovation,8 exploring caves,9 tilling soil,10 and cleaning up bird roosting sites.11 If you live in an area where Histoplasma is common in the environment, contact your local or state health department for the most up-to-date information about outbreaks.

Deaths due to histoplasmosis