How common are C. neoformans infections?

C. neoformans infections are rare among people who have healthy immune systems; however, C. neoformans is a major cause of illness in people living with HIV/AIDS, with an estimated 152,000 cases of cryptococcal meningitis occurring worldwide each year. 1

Before antiretroviral therapy was discovered, fungal and other opportunistic infections were a major problem for people with advanced HIV/AIDS. Since then, the numbers of fungal infections and deaths due to fungal infections in people with advanced HIV/AIDS have decreased substantially in the US and other developed countries. 2,3 For example, one study showed that the incidence of cryptococcosis in AIDS patients in the US decreased by approximately 90% in the 1990s. 2 The decrease in opportunistic infections is primarily because earlier diagnosis of HIV and initiation of antiretroviral therapy (ART) helps keep people with HIV from reaching the stage where their immune systems leave them most vulnerable to fungal infections and other infections. 4 However, fungal diseases, particularly cryptococcosis, are still a concern for people living with HIV/AIDS in the US.

Nationally representative estimates for the incidence of cryptococcosis are difficult to establish because cryptococcosis is only reportable in a few states. Results from active, population-based surveillance in two US locations in the year 2000 indicated that the annual incidence of cryptococcosis among persons with AIDS was between 2 and 7 cases per 1,000, and the overall incidence was 0.4 to 1.3 cases per 100,000 population; the case-fatality ratio was approximately 12%. 2 More recently, an analysis of stored serum samples from HIV-infected persons with low CD4 counts enrolled in studies in the US during 1986–2012 found the prevalence of cryptococcal antigenemia to be 2.9%, indicating that the prevalence of cryptococcal infection among HIV patients in the US may be high enough to consider targeted screening. 5 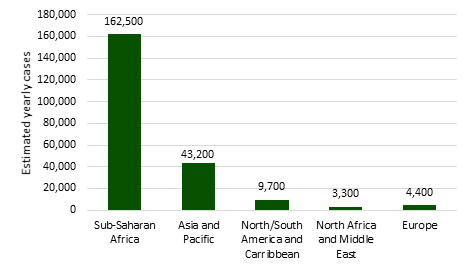