At first, Ken thought he had the flu. The coughing and weakness had quickly progressed to chills, a high fever, appetite loss, and trouble breathing. After a week, he wasn’t getting better, and Ken began to worry that he had something worse than the flu. The answer turned out to be something he could not have imagined.

Ken’s doctor thought it was a run-of-the-mill bacterial pneumonia. He gave Ken oxygen to help him breathe and put him in the hospital to run tests. However, the team of doctors couldn’t figure out what was making Ken sick.  “[The doctors] kept doing testing. They did chest X-rays, took blood tests…the doctors tried everything and just couldn’t figure out what was wrong. [They] said our best bet was to go up to another hospital where they might know more,” said Ken’s wife, Lynn. 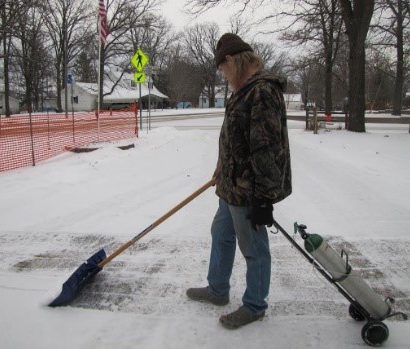 Ken shoveling snow in his yard while holding his oxygen tank.

Doctors at the second hospital tested Ken’s blood and urine for histoplasmosis. This infection is caused by a fungus that lives in the environment, often where large amounts of bird or bat droppings, or poop, are present. The tests came back positive for histoplasmosis. Ken thinks he was probably exposed to the fungus while helping his friend renovate an old house. “My wife said ‘you should be wearing a mask,’ because it smelled just terrible in that house. There was bird poop, bat poop, you name it in there,” said Ken.

Ken is now taking antifungal medicine, which he might have to keep taking for up to a year. Ken also takes medicines for rheumatoid arthritis. The arthritis medicines lower his body’s ability to fight germs and sickness (called a weakened immune system). This makes him more likely to get a serious fungal infection.

“People who have COPD [chronic obstructive pulmonary disease, or lung disease], rheumatoid arthritis, cancer, those types of conditions, should know that there’s this possibility [of getting infections like histoplasmosis]. If more people knew this, I think it could be prevented,” said Ken. CDC recommends that people with weakened immune systems who live in areas with histoplasmosis avoid activities like cleaning chicken coops or working on buildings where there are bird or bat droppings.

Before he got sick, Ken enjoyed hunting, fishing, and other outdoor activities. He says these are much more difficult now, while he’s still recovering. “I like being outside a lot. Now being on the oxygen tank, I can’t do the things I want to do outside like hunting. Standing out in the woods [is much harder when] dragging the oxygen around. It’s stopped me from doing a lot of things I enjoy,” said Ken.

Ken and Lynn wish more people knew about histoplasmosis. “More people should know that [it] can be prevented. I didn’t know anything about it before I got it. It just surprises me that so many people don’t know about this disease.” 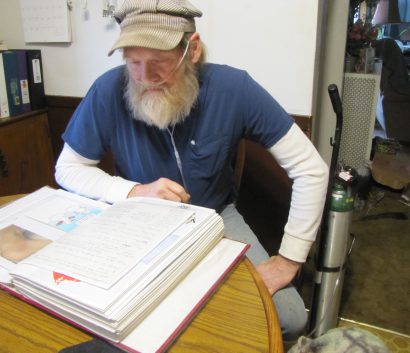 Ken looks at a scrapbook he and his wife, Lynn, made using photos and cards he received during his illness.