From Crisis to Comeback:
Turning the Tide on TB in Eswatini Eswatini, a small kingdom in Southern Africa, faced a deadly surge of TB cases in the early 2000s. Photo by: Brittany K. Moore Themba Dlamini (R), a long-time advocate for TB education in his community, visits with a client. Photo by: Brittany K. Moore

In the early 2000s, Eswatini was a nation in crisis. Tuberculosis (TB), one of the deadliest infectious diseases in the world, was spreading rapidly across the small, landlocked kingdom.

TB was killing 18 out of every 100,000 people in Eswatini every year – a death rate ranked among the highest in the world for the disease.

Themba Dlamini, an epidemiologist in Eswatini’s Ministry of Health, had witnessed firsthand the devastating effects of TB throughout his country. As a scientist in the kingdom’s National TB Control Programme, he was passionate about educating those in his community about TB.

Then in 2006, the disease brought tragedy directly to his own home: his first-born daughter died from TB.

“What I went through I wouldn’t like any other person – father, mother, or anyone – to go through,” he recalls.

“I could see that my daughter died because people didn’t know what to do,” he said. “I saw that there’s a lot that we needed to tell people about the disease – healthcare workers, community members, politicians, everyone – that this disease can kill. But TB can be prevented. So why is it killing us?”

In Need of an Intervention

The loss of his daughter fueled his drive to educate his community about TB and, in 2007, Dlamini was appointed Programme Manager of Eswatini’s TB Programme – overseeing an effort aimed at raising awareness and driving down cases and deaths of TB across the country.

Dlamini’s daughter was just one of the thousands who lost their lives to TB in Eswatini during the peak of the epidemic. In addition to having one of the highest rates of TB-related deaths, Eswatini also had the world’s highest rate of new TB cases in 2003 – with 1,250 new cases per 100,000 people. Nearly 12,000 new TB cases were reported that year, and drug-resistant strains of TB were on the rise.

At the same time, the nation was enduring a severe HIV epidemic, with almost 1 in 3 adults in the country living with the virus. HIV weakens the immune systems of those infected, making them even more susceptible to TB. Untreated, TB or HIV alone are both deadly, but together – the results can be catastrophic. In fact, TB is the number one cause of death among those living with HIV.

It was clear Eswatini needed help. Once the Eswatini Government declared TB a national emergency, CDC and partners joined forces with them and launched into action to address the TB crisis. Photo by: Brittany K. Moore

In 2011, the Government of Eswatini officially declared TB a national emergency. With the support of CDC, PEPFAR*, and other global partners, Eswatini launched an expedited, multi-sectoral response to stem the TB crisis. The emergency intervention engaged local political leaders, chiefs, government entities, community organizations, and the Eswatini Ministry of Health to work in tandem with CDC and an array of global health organizations.

The comprehensive response focused on creating robust awareness about TB, building capacity and training personnel within the healthcare system, implementing innovative diagnostics, and increasing treatment sites throughout the country, as well as enhancing approaches to find, prevent, and treat TB.

Said Dlamini, “we were not running an ordinary race. We were in emergency mode.”

To improve treatment adherence and fight against the rising issue of drug-resistant TB strains, the TB Programme and its partners introduced adherence officers, each armed with a motorbike and cell phone. Adherence officers worked with TB clinics, going into communities to check on patients who had not returned for test results, appointments, or medication. For those found to be too sick to come to the clinic, these officers brought their medication to them.

“At that time, we were missing around 73 percent of the potential cases out there,” Dlamini said. “The cases were there in the community, but we were not finding them.”

To that end, they launched 369 active case-finders – one for each of Eswatini’s 369 chiefdoms – who took to communities on bicycles to find the hidden cases and ensure these individuals get the care and treatment they needed.

Over a decade later, Eswatini’s all-out assault on TB has had a dramatic impact. Eswatini has seen an 80 percent reduction in new TB infections since the state of emergency was declared – from 11,000 new cases in 2011 to just over 2,000 cases in 2020. TB-related deaths also plummeted by approximately 75 percent during that time.

“Today, we are at almost 90 percent case detection and treatment success,” said Dlamini, “It has been an incredible transformation.”

“The progress made in the fight against TB in Eswatini in such a short time is truly remarkable,” said Dr. Anand Date, Acting Global TB Branch Chief in CDC’s Division of Global HIV & TB. “The lessons we’ve learned in Eswatini have given us invaluable insight as CDC continues to fight TB across the globe.” It was within the backdrop of these dramatic gains that COVID-19 – a respiratory disease with symptoms not unlike TB – began sweeping the globe.

“With COVID, all of the sudden, everything has changed,” said Dlamini. ”There have been lockdowns, some lost income, and now confusion – about what is COVID-19 and what is TB.”

Like many countries, surges in the number of COVID-19 cases have challenged the capacity of the Eswatini healthcare system, diverting TB nurses and doctors to COVID-19 centers and TB resources to COVID-19 testing and treatment along the way. Lockdowns have disrupted transportation systems and work-related migration, preventing patients from visiting TB treatment centers for screening, follow-up appointments, and lifesaving medication. Yet the challenges introduced by COVID-19 have given way to innovation.

For instance, to combat the challenge of lockdown restrictions, TB clinics have shifted to virtual treatment monitoring options, providing patients with phones to talk to healthcare workers who make sure they are taking their medications as needed. They’ve also implemented new treatments with shorter regimens and integrated TB services into other healthcare programs.

“When we started, we didn’t know what to do, we didn’t know where to learn from,” said Joyce Sibanda, National TB/HIV Community Services Coordinator at Eswatini’s Ministry of Health, about the Ministry’s TB efforts. “We would plan, we’d implement, we’d fail, we’d start again. Now, we are quite sharper than before.”

Thanks to these innovations, Eswatini has been able to sustain progress in the fight against TB while fighting COVID-19, and the existing TB health systems have helped bolster progress against both diseases. A New Era of Hope

However, today, challenges in Eswatini’s TB response remain. According to The World Health Organization (WHO), the kingdom continues to have a high burden of TB, with 319 new cases of TB reported per 100,000 people in 2020.

Yet, looking ahead, Dlamini and his collaborators have hope for the country’s ongoing TB efforts. As Eswatini’s TB Programme continues to adapt in the face of new challenges, their hope is that the resilience and momentum Eswatini has gained will continue. In fact, just over a decade since the peak of the TB crisis in this small kingdom, their aspiration now is to eliminate TB completely by 2030.

Dr. Date says it will take sustained effort to get there. “CDC’s work in the fight against TB is more crucial than ever – in Eswatini and around the world, especially in the face of COVID-19,” he said. “We cannot take our foot off the gas.”

Mr. Dlamini, committed as ever, believes they will.

“Optimistically, I look forward to ending TB [in Eswatini],” says Dlamini. “If I’m lucky – in my lifetime.” 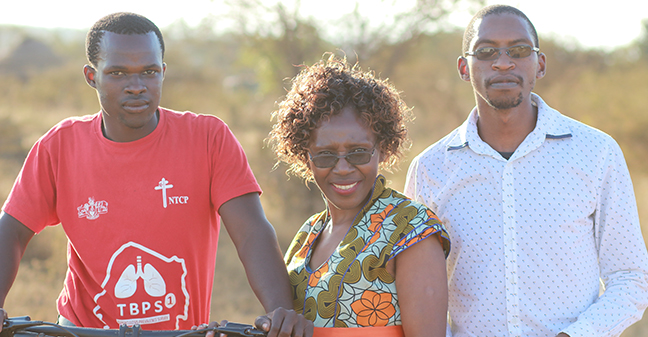 Today, Eswatini has seen a dramatic reduction in new TB cases and TB-related deaths since the state of emergency was declared. Photo by: Brittany K. Moore
***
Despite being treatable and preventable, TB is one of the deadliest infectious diseases in the world, taking the lives of approximately 1.5 million people each year, and the number one cause of death among people living with HIV. CDC is on the frontlines in more than 25 high burden countries working to find, cure, and prevent TB and help sustain country efforts.
With partner governments worldwide, CDC is working to increase access to enhanced screening and diagnostics; identify and expand better treatment regimens; break the cycle of transmission; and help lead global efforts to scale up TB preventive treatment for those most vulnerable to the disease.
*U.S. President’s Emergency Plan for AIDS Relief