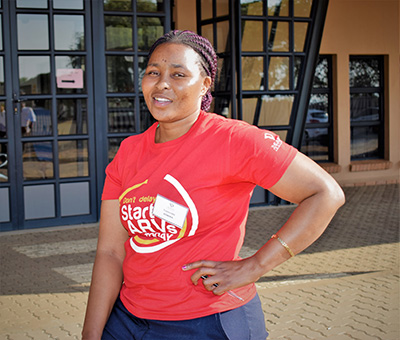 When Thenjiwe Koboka started recruiting acute patients to test for HIV at Palm Ridge Clinic in Gauteng, South Africa, she had no idea that her initiative would solve a long-standing problem for the facility. While the clinic was routinely testing people for HIV, it was not meeting its targets for testing and identifying new HIV-positive clients – that is, until Koboka’s innovative efforts and the launch of a new initiative known as Siyenza in early 2019.

Introduced by the U.S. President’s Emergency Plan for AIDS Relief (PEPFAR), Siyenza, which means “we are doing it” in isiZulu, is an intensive, hands-on, site-level intervention in which CDC technical staff work alongside South African government and PEPFAR-partner staff to strengthen the core elements of HIV service delivery – testing and identifying people who are living with HIV, linking those who test positive to life-saving treatment, and ensuring that they successfully remain on treatment. When Siyenza was introduced at Palm Ridge Clinic, the Quality Improvement Team – made up of staff from the clinic, CDC, and its implementing partner, The Aurum Institute – set new HIV-testing targets per day and discussed how these targets could be reached.

The team visually mapped the clinic’s HIV-testing process from beginning to end. This mapping exercise enabled it to identify the gaps in the testing process and identified opportunity points within the facility’s patient flow in which HIV testing could be offered. One of those points was the Acute Patient Waiting Area, and this is where Koboka came in.

She had already started recruiting acute patients, entirely on her own initiative, to test for HIV and had created a tracking form to record the name of each person she recruited. Despite her initiative, a challenge remained: Koboka would recruit people who would agree to test, but when it was time for them to go to the clinic’s lay counselors for pre-test counselling, they would not go—dropping out of the loop at the critical point.

Seeing the potential in what Koboka was doing, CDC’s implementing partner, the Aurum Institute, hired her as a Patient Navigator for Palm Ridge Clinic. With the help of CDC, the organization adapted Koboka’s recruitment tracking form to make it easy for her to navigate patients from the waiting area to HIV testing and then on to treatment initiation and finally case management and adherence counselling. At the end of this process, this system also ensured that the data was captured in the electronic database.

Dr. Leigh Berrie, Public Health Specialist at CDC South Africa, says Koboka received training on the navigation process. “Through empowering and encouraging Koboka, and conducting weekly site visits to monitor progress, we were able to increase the number of patients tested per month from approximately 450 tests per month in December to over 1,000 tests by the end of August,” she notes. “Most importantly, we were able to make sure that no patient was lost along the way.”

Koboka is no ordinary Patient Navigator; she is a shining star who has helped the Palm Ridge Clinic to exceed its HIV testing targets since Siyenza was introduced. On average, she recruits more than 60 people per day to test–something that has left the Quality Improvement Team in awe of her.

Before she was hired as a Patient Navigator, she volunteered as a gardener at the clinic. One day while she was busy tending to the garden, Facility Manager Margaret Nkosi asked her to come inside the facility to help them clean up. As she was cleaning in the waiting area, she noticed a patient who seemed very sick. She approached her and asked if all was well. The patient said she had the flu, but Koboka suspected there was more to it. She encouraged the patient to test for HIV, and that was the beginning of her journey to play a part in transforming testing and treatment rates at Palm Ridge Clinic.

“When I encouraged the patient that day to test for HIV, it was about ensuring that she receives not just the flu treatment, but the cause of the illness would be addressed too,” Koboka says. “When growing up in the Eastern Cape, I saw many people die of AIDS-related illnesses because they had no idea they were living with HIV. I told myself that I want to help educate people about this disease and why it is not a death sentence.”

Today she is doing exactly that. She not only focuses on the patients at the clinic but also gives health talks during community meetings and encourage people to come and test for HIV at the clinic. When the people come, they ask specifically for her, and she navigates them through the process. She often goes a step further and visits them in their homes to find out if they are adhering to treatment and offers them support where she can.

It is dedicated staff like Koboka who have come to stand out as a result of Siyenza—and who have made the initiative so successful. Thanks to this PEPFAR/CDC initiative, she not only has a full-time job, she is making a significant difference in her community and inching her country one step closer to controlling its HIV epidemic.