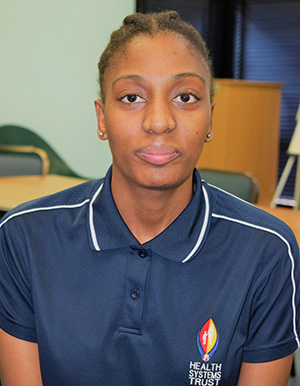 South Africa maintains the largest antiretroviral treatment (ART) program in the world, with more than four million people estimated to be on treatment. Despite progress in getting people living with HIV (PLHIV) into treatment, the country struggles with poor retention-to-care as clients continue to fall through the cracks and are lost to follow-up (LTFU). Yet, retaining PLHIV on treatment is the only way to achieve viral suppression and, ultimately, control of South Africa’s epidemic.

To address these challenges, the U.S. President’s Emergency Plan for AIDS Relief (PEPFAR) launched, through CDC, an intense, results-oriented, facility-based initiative referred to as “Siyenza” in South Africa early 2019. Siyenza is an isiZulu term which roughly translates to “we are doing it.” The initiative rapidly improved site-level performance across several HIV clinical-cascade performance indicators, including HIV case-finding, same-day ART initiation, and client retention on ART.

One of the 419 public health facilities identified as needing urgent intervention through Siyenza was the Pinetown Clinic in Durban, KwaZulu-Natal Province. The facility had poor retention of clients on ART, both those newly initiated and currently on treatment. When CDC launched Siyenza in February, the facility had lost 1,714 patients who were on ART the previous quarter (October to December). All facilities are supposed to demonstrate an increase in the total number of people remaining on ART in order to show good retention.

Given this situation, the facility had to come up with innovative solutions to improve retention and bring back all LTFU clients. Working together with CDC and its implementing partner, Health Systems Trust (HST), the Pinetown Clinic team came up with an idea of sending SMS reminders to clients who have missed appointments. In the past, the facility tried to trace clients who missed appointments by calling them using the facility’s landline, but the calls would often go unanswered. Often, clients recognized the landline number and were not eager to answer it.

Two of the facility’s community linkage officers, Snenhlanhla Zuma and Mluleki Ndlovu, were given mobile phones, and, with the help of the rest of the team, they developed the short text messages that were to be sent to clients who were on the clinic’s early missed appointments, late missed appointments, and LTFU lists. The pair then went a step further and translated the messages from English to isiZulu, the widely spoken language in KwaZulu-Natal, to ensure that the clients understood what was being communicated. 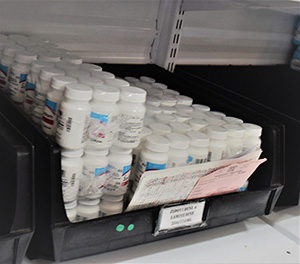 The SMS reminders started going out at the beginning of March, and, by the end of the month, the results were showing. The total number of clients remaining on ART (or TROA), which is a key indicator followed by the National Department of Health, increased from 8,605 in February to 9,115 in March and 9,346 in April. (The TROA indicator represents clients newly initiated on treatment, clients with true missed visits over 28 days that were traced back via phone calls and SMS, and clients misclassified as having missed an appointment due to inefficient filing systems and inadequate documentation of clients no longer accessing treatment at the facility.) It continued to increase in the following months — reaching 10,427 at the end of August and, by then, the facility was well out of negative numbers and boasting a positive net.

As the TROA increased and the facility received good feedback from clients who were traced and brought back to care, the Pinetown Clinic team shared the good news on a WhatsApp group of area clinic managers, notes Dr. Mary Mogashoa, CDC South Africa Public Health Specialist and Site Lead for Pinetown Clinic. “Most clients appreciated the gesture and even sent messages of appreciation to the two linkage officers after the services they received,” she says.

“The non-communicable disease clients also complained and requested the clinic to send them SMS reminder messages as well for their appointment,” she adds. “The two linkage officers realized that the most effective time for sending the reminders is during weekends and after hours. During the day most of clients are not allowed to respond to phone calls or SMS.”

However, the adoption of the SMS reminder system didn’t end there. The District team was so impressed by the good feedback from clients that it decided to adapt and standardize the reminder system. It is now being used by all Siyenza/Phuthuma municipal clinics, demonstrating the effectiveness of the innovation brought by the Siyenza team.

Ndumiso Sibiya (not his real name) is one of the people who received an SMS reminder from the Pinetown Clinic after he missed his appointment. He was out of town when he received it. The 28-year-old student and part-time Uber driver initially thought the SMS must have been erroneously sent to him until he checked his clinic card. Upon review, he realized that he was late for his appointment to collect his ART by two weeks.

Realizing that the message was indeed meant for him, he quickly replied to the linkage officer saying he was out of town but had medication with him and was taking it. He promised he would come to the clinic on his return.

“I honestly thought I would be returning to the clinic the next month because I still had a container almost full of my medication,” he says. “I have never missed an appointment since I started taking treatment. This time it happened because I had found a new job in Camperdown and must have forgotten to check my clinic card before leaving Pinetown.”

There are many others like Sibiya who forget scheduled appointment dates for whatever reason. Fortunately for him, he had sufficient medication on hand because he was given treatment for three months when he was initiated—but that may not always be the case for many patients. Fortunately for those who have missed appointments and possibly interrupted treatment, a friendly SMS reminder to come to the clinic—and the promise of being fast-tracked to the pharmacy by the linkage officer once they get there—goes a long way. This simple innovation, like so many others that distinguish the Siyenza initiative, is designed to enhance patient care and make it easier for PLHIV to remain on treatment.