The U.S. government agencies which collectively implement the President’s Emergency Plan for AIDS Relief (PEPFAR) recently convened a weeklong planning meeting at the U.S. Embassy in Kigali with partners and stakeholders in preparation for the final submission of Rwanda’s 2018 PEPFAR Country Operational Plan (COP) to the Office of the Global AIDS Coordinator in Washington, DC. Much of what will ultimately make up this year’s COP will build upon the 15-year history of PEPFAR’s partnership with the government and people of Rwanda to end HIV/AIDS. Over that time, many lessons have been learned, much progress has been made, and many lives have been saved through the generosity of the American people.

Perhaps the most immediate and transformative impact of the introduction of PEPFAR support to Rwanda was the dramatic increase in the number of people living with HIV (PLHIV) receiving antiretroviral (ARV) drugs as part of lifesaving antiretroviral therapy (ART). In 2006, just three years after PEPFAR began its partnership with Rwanda, over 30,000 PLHIV were already receiving ART. Considering that less than 1,000 PLHIV had access to ART in 2003, this was a remarkable achievement with real impact. Where once AIDS was like a death sentence—wiping out entire families—lives were now being saved. Fast-forward to today, and PEPFAR supports close to 95,000 PLHIV in Rwanda on ART. HIV is no longer viewed or treated as a terminal but rather as a chronic disease that can be managed with effective treatment and care. 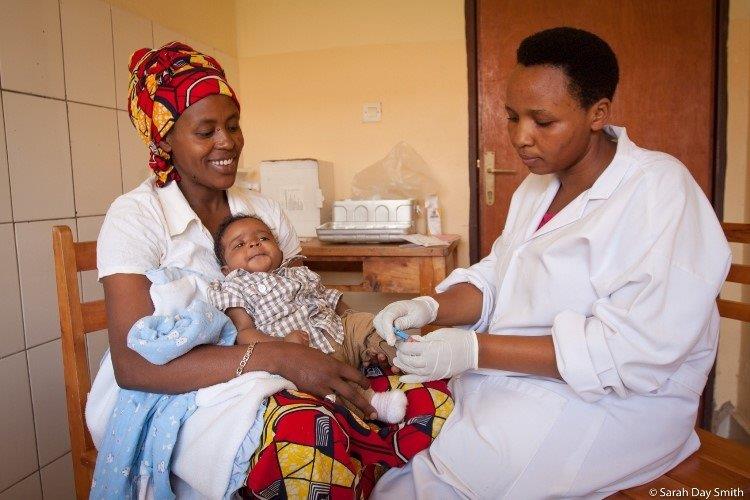 These are impressive statistics, but behind the numbers are real people—people like Jacqueline (pseudonym to protect her privacy), the teenaged bride who married while still in secondary school and who lost her husband and two children to AIDS some 16 years ago. Jacqueline’s story in many ways encapsulates PEPFAR’s 15 years in Rwanda. At the time she became a widow and the only surviving member of her young family, few people knew their HIV status and, of those who did, only a tiny percentage of those who needed it were receiving ART. But today, Jacqueline is but one of the many HIV-positive Rwandan’s who now live healthy, productive lives thanks to effective care and treatment of their disease. This is the story of PEPFAR’s transformative impact, and CDC Rwanda is proud to have played a leading role in this remarkable success.

Today, over 90% of PEPFAR programs in Rwanda are implemented through CDC Rwanda. The success of this PEPFAR-CDC partnership is evidenced through the success of Rwanda’s HIV/AIDS care and treatment efforts. Fast-forward to today, and PEPFAR supports close to 95,000 PLHIV in Rwanda on ART. HIV is no longer viewed or treated as a terminal but rather as a chronic disease that can be managed with effective treatment and care. Jacqueline’s story intersects with another critical aspect of CDC Rwanda’s work under PEPFAR. Being a young woman when her husband died, she began antiretroviral drug therapy, stayed on the program and maintained good health. She ultimately got remarried to an HIV-negative man, and together they now have three healthy, HIV-negative children thanks to PEPFAR’s prevention of mother-to-child transmission (PMTCT) services.

Jacqueline and her family are just one of many PMTCT success stories in the country. Rwanda has had great success with its PMTCT efforts, which include: immediate enrollment of HIV-positive pregnant women on ART under the Option B+ program; initiating and remaining on ARTs prior to and throughout pregnancy and breastfeeding of all children; delivering each child via cesarean section; and receiving HIV medications to reduce the risk of infection that may have entered the body during childbirth. By the end of 2017, PEPFAR had supported 3,380 HIV-positive women on ART, thereby reducing the risk of mother-to-child transmission of HIV during pregnancy and delivery. This strategy has helped women like Jacqueline deliver babies free of HIV. Rwanda now has one of the lowest mother-to-child transmission rates in the region with less than 2 percent of HIV-positive mothers giving birth to HIV-positive children.

Jacqueline says that, since her first family perished due to HIV, “having an HIV-negative family empowers me a lot. It has also helped me stay healthy and take care of myself, which is why I am still alive today. That is the reason for my appreciation to the government for helping us get the medication and also the sponsors who help us get this medication. In the beginning I had no hope, but today I have realized that medication can help me stay alive and healthy.” Stories like Jacqueline’s are the faces behind the statistics and testaments to PEPFAR’s 15 years of scientific innovation and life-saving impact.

As the PEPFAR team in Rwanda (of which CDC is a critical part) finalizes its 2018 COP, the focus of this plan remains how best to learn from the lessons of the past, build upon this incredible history, and continue to accelerate efforts to end HIV/AIDS in Rwanda. A decade and a half since PEPFAR joined with Rwanda in the fight against HIV/AIDS, the country is now closer than ever to ending AIDS—a goal which once seemed utterly unattainable. PEPFAR’s partners and stakeholders, led by MOH and including the likes of the World Health Organization, UNICEF, and The Global Fund, continue to look for new ideas and new approaches to increase their impact and save more lives like Jacqueline’s so that the dream of ending AIDS in her lifetime might become a reality.

Page last reviewed: May 14, 2018, 11:00 AM
Content source: Centers for Disease Control and Prevention