Ask anyone who works at a public health facility in South Africa about convincing men who don’t feel sick to come and test for HIV, and they will probably tell you that it’s no easy feat. Addressing poor health-seeking behaviors among men is a known challenge in the fight against HIV, and South Africa is no exception.

While engaging men in HIV testing, prevention, and treatment services may be a challenge for many, it is a special talent for Thami Dlomo, a lay counsellor from KwaMashu B Clinic, north of Durban in KwaZulu-Natal Province. Dlomo, 52, reaches out to men with great ease, and convinces them to test for HIV and, if necessary, start on treatment at his clinic. His secret is simple, he says: “I take advantage of the gender dynamics.” 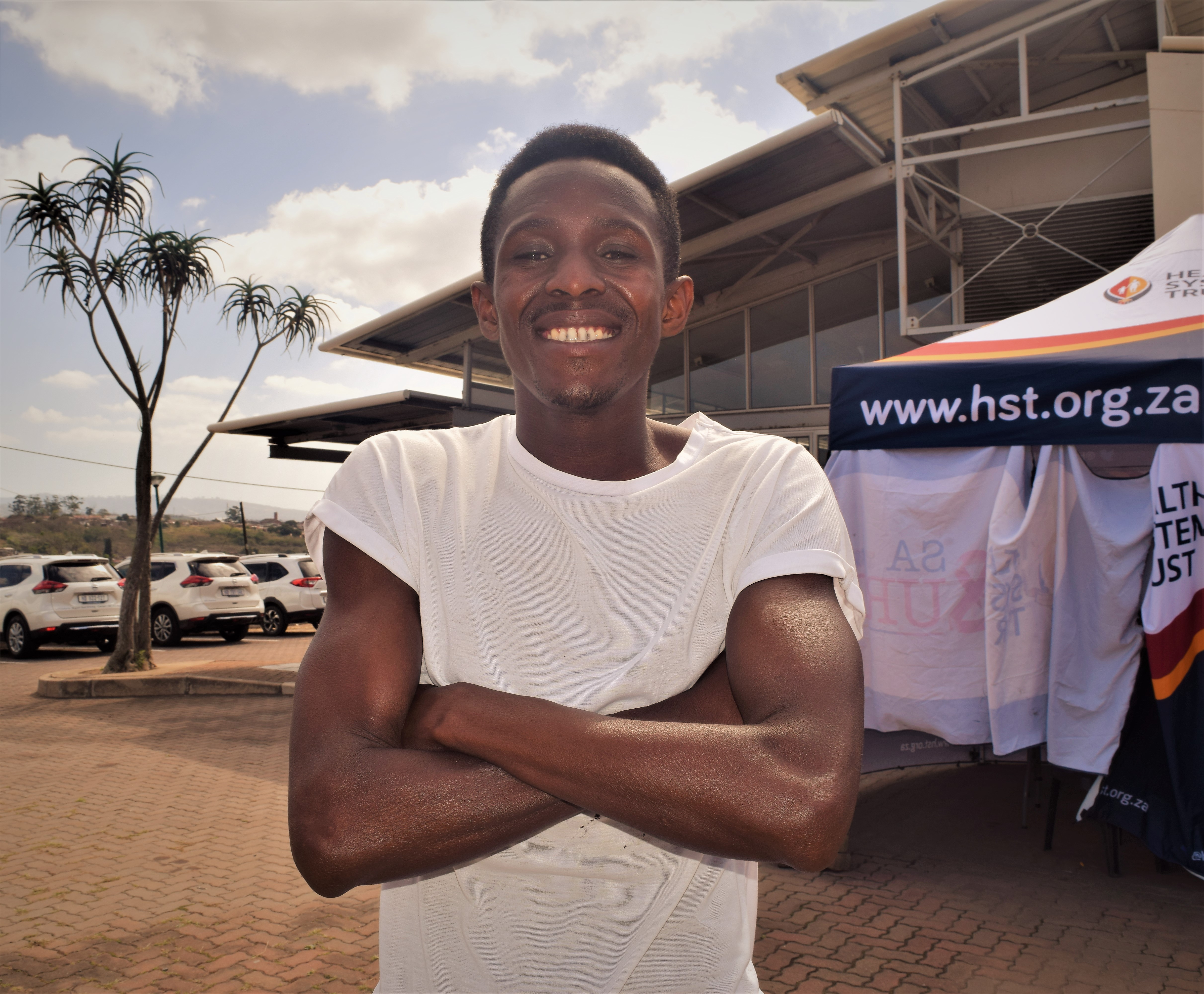 “I know that men don’t like to come to the clinic because they hate spending hours sitting in the queues waiting to receive care and treatment. But most importantly, they don’t feel comfortable with being attended to by a female health worker. So, I use that to my advantage when I approach them,” Dlomo says.

“For example, when I see a man who is waiting in the queue, I approach him and ask what he has come to the clinic to do. He may say, ‘I have flu,’ and I’ll say, ‘Don’t worry my brother. Come with me to my office, and I can help to fast-track you so that you don’t spend hours here waiting to be seen by the nurse.”

When the client gets to Dlomo’s “office” (a tented gazebo placed outside the entrance to the facility), he starts giving him a general health and wellness talk and then transitions to HIV. He then encourages him to test, and, regardless the outcome of the test, Dlomo then fast-tracks the client by taking him straight to a Department of Health male nurse clinician. He will do an exam before giving the client treatment for whatever acute illness he has or initiating him on antiretroviral treatment (ART) if he is HIV-positive.

This whole process takes less than an hour, something Dlomo says is the reason men jump at the opportunity of being fast-tracked. On average, a patient in South Africa spends at least four hours at a public clinic just to get routine care and treatment. So, for men anxious to return to work or school, shorter wait times are a huge incentive.

While the shortened waiting time is certainly a factor in convincing men to test for HIV, Dlomo believes that his being a man is likely the most important factor. “Men find it easy to talk to another man. With me, they are not scared of saying they have sexually transmitted infections or even sharing their deepest darkest secrets. And this, for me, is what I would say is the reason for my success at this clinic,” he explains.

A solution to a problem

KwaMashu B Clinic has enjoyed great success in terms of the numbers of men who have been tested for HIV since Dlomo was employed in February 2019. The number of men tested for HIV at the clinic in January was 265, and the latest data show that this figure more than doubled six months later—reaching an impressive 694 in July.

Dlomo was specifically hired to increase the number of men testing for HIV at the facility as part of an initiative known as “February Frenzy” — now referred to as “Siyenza.” Siyenza was introduced by the U.S. President’s Emergency Plan for AIDS Relief (PEPFAR) in South Africa to rapidly improve site-level performance across several HIV clinical-cascade performance indicators, including HIV case identification, new ART initiation, and client retention on ART. Under the enhanced scrutiny of the Siyenza initiative, issues like KwaMashu B Clinic’s failure to meet its target for testing men for HIV were identified. As a key partner in PEPFAR, CDC, along with its implementing partner, Health Systems Trust (a nongovernmental organization which supports the facility), suggested that the clinic employ a male lay counsellor to remedy the situation, and shortly thereafter Dlomo began to work his magic.

KwaMashu B’s Facility Manager, Thandazie Owolabi, says this strategy worked. “We were really struggling to get men to test for HIV before Dlomo joined us. Men were coming to the facility, accompanying loved ones who were sick, but it was difficult to get them to test while waiting for their loved ones to be attended to. When the female lay counsellors approached men to offer tests for HIV, they would blatantly refuse and preferred to sit idle for hours waiting for their family members to receive care.” 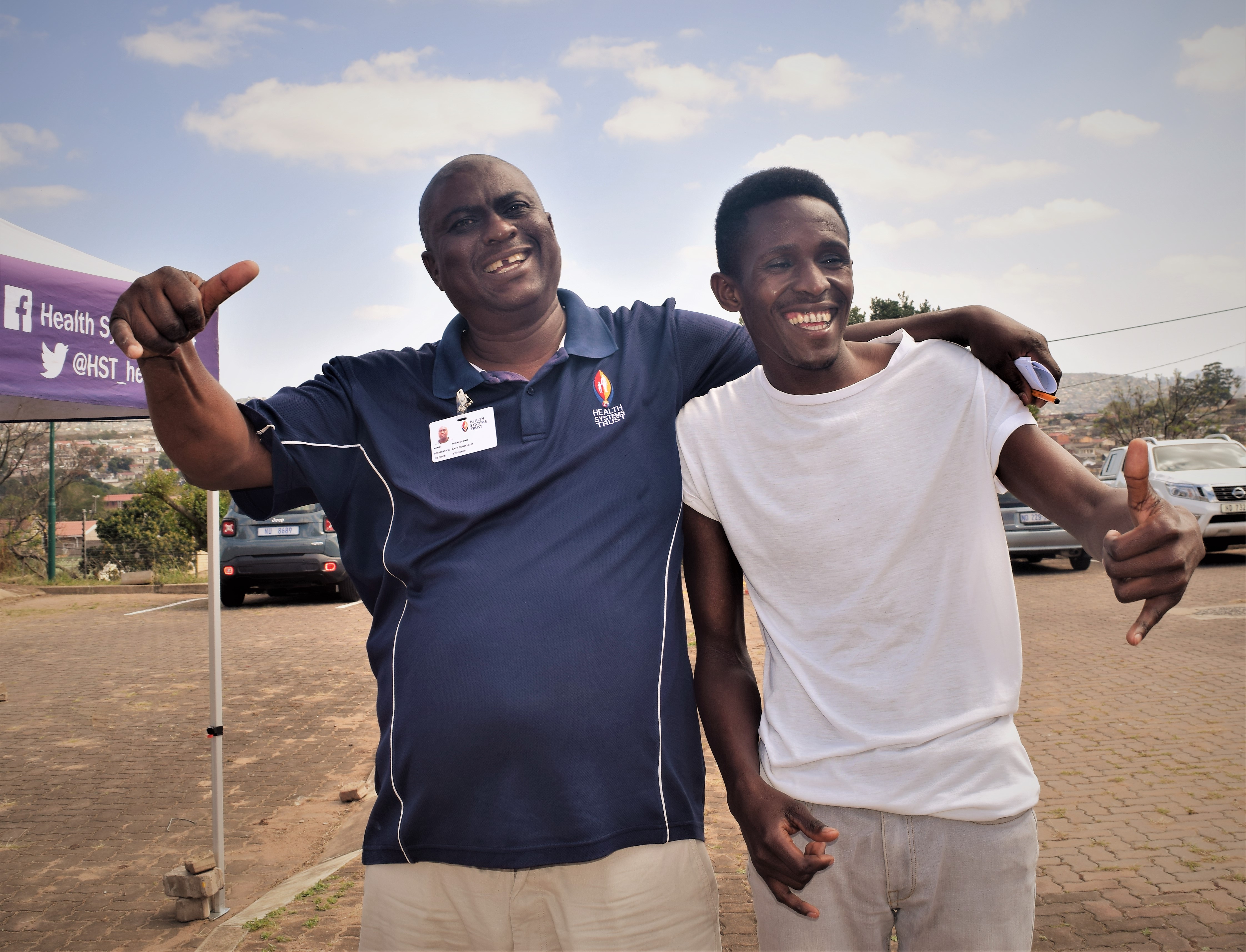 “It was the same even when we went for community outreaches at the nearby men’s hostel,” she adds. “The team would go out of its way to reach out to men and encourage them to test, but with no success. Now all that is in the past—all because of Dlomo. Ever since he started, our male HIV testing stats have increased significantly.”

Dlomo is humbled by the success he achieved at the KwaMashu B Clinic within a short space of time. He says it makes him want to do even more. “For me, it is not about numbers, but helping people to know their HIV status so that, if they are positive, they can take treatment and live longer,” he says. “I saw the devastation that HIV and AIDS caused in my community back [before treatment was available], and I would not want to see that happen again, especially now that treatment is freely available.”