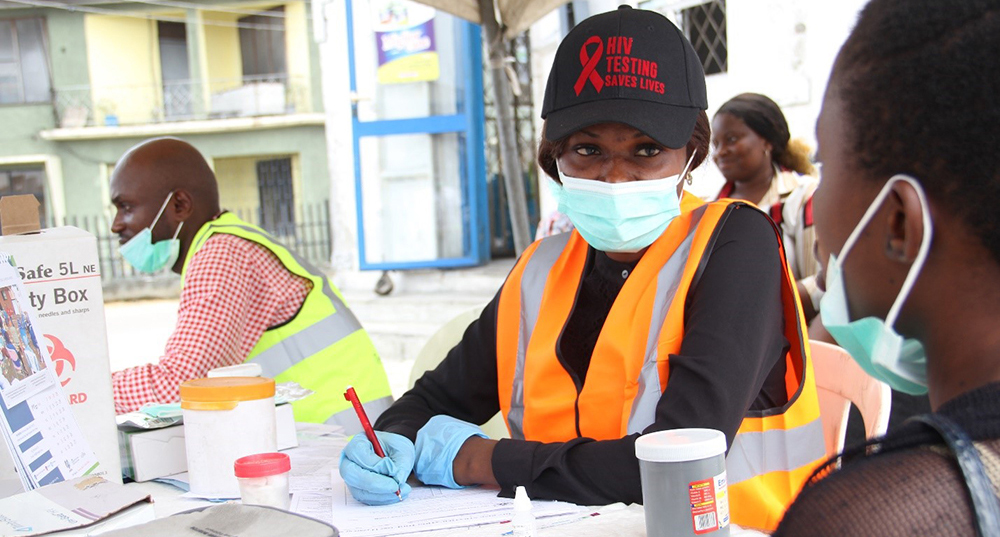 A young person gets an HIV test at an open-air testing site in the Rivers State.

Nigeria, the most populous country in Africa, is home to the fourth largest HIV epidemic in the world and one of the highest rates of new infections in sub-Saharan Africa.

For decades, the country was unable to effectively find those living with HIV and get them started on treatment. As a result, year after year, they were unable to meet the UNAIDS’external icon goals for HIV epidemic control.

That all changed in 2018, when the country leadership, with support from CDC and the U.S. President’s Emergency Plan for AIDS Relief (PEPFAR), launched a national, household survey that confirmed less than half of the 1.9 million people living with HIV in Nigeria were receiving lifesaving HIV treatment.

The survey revealed something more. It identified, more precisely, where these individuals were residing.

Armed with these data, the team in CDC-Nigeria set out to implement an ambitious approach that would employ the skills, resources, and commitment of a broad range of partners – from the Ministry of Health to the agency’s implementation partners, to state and local community leaders — to dramatically scale up HIV treatment and put Nigeria on the path to epidemic control.

Beginning in April 2019, CDC and partners launched an aggressive HIV anti-retroviral therapy (ART) Surge to efficiently increase HIV testing and dramatically expand access to lifesaving treatment for people living with HIV in the nine Nigerian states with the largest numbers of individuals with HIV not on treatment.

An innovative, strategic operational platform, known as CIRAS (Comprehensive, Integrated, Resilient ART System), was designed for the Nigeria ART Surge and launched in the targeted states of Benue, Delta, Enugu, Gombe, Imo, Lagos, Nasarawa, and Rivers, as well as the Federal Capital Territory.

As part of this intensive push, CDC and partners established incident command structures in each of the states. Each command structure was, in turn, led by an operations chief who was responsible for overseeing HIV service delivery efforts in that area. This included working closely with community leaders, capturing key data, identifying challenges and brainstorming solutions to expand and enhance efforts to get lifesaving treatment to those who needed it most.

“These operational shifts were the turning point in our efforts,” remembers Dr. Solomon Odafe, Deputy Director for Programs for CDC-Nigeria. “We now knew where the disease burden was, and we could attack it. We created accountability by placing individual people responsible for success in each state. We leveraged technology to capture real-time information and we were able to take our full arsenal of tools into these communities and effectively arrest the epidemic,” he said.

In each state, the Ministry of Health, CDC and its implementing partners worked with community leaders to launch a combination of proven HIV interventionsexternal icon – layering them in such a way to bring about the greatest impact.

The results were immediate and impressive. A A recent analysis published in CDC’s Morbidity and Mortality Weekly Report (MMWR) showed that, even in the midst of the COVID-19 pandemic, the first 18-months of the Nigeria HIV treatment Surge resulted in an eight-fold increase in the weekly number of newly identified people with HIV who started treatment in the nine focal states. The total number of people diagnosed with HIV who are now receiving treatment in those nine states also skyrocketed – a stunning 65 percent increase (208,202) in a year and a half.

CDC leaders in Nigeria and Atlanta would go on to share lessons from the nine initial states with partners working in nine additional Nigerian states. As a result, the Nigeria HIV treatment Surge increased the number of people living with HIV in these 18 states from 454,000 in 2019 to 903,000 in 2021 – in essence doubling the number of people with HIV on treatment in just two years.

Dr. Ibrahim Jahun served as CDC-Nigeria’s Incident Commander of the Surge during its first 18 months of implementation.

“When I look back at my time helping to lead this effort, I think about the innovations and the way we worked synergistically to create impact,” he said. “But more than anything I think about the hundreds of thousands of lives that have been saved, all of those men, women and children who now have a future and how much closer we are to ending HIV in Nigeria.”

Jahun attributes the program’s success to its use of local, real-time data to help CDC and local experts refine and adjust their efforts on the ground for the greatest impact.

“At one point,” he explains, “the data highlighted that not enough people were being tested in several areas. By having access to that information in real time and being able to rapidly pivot and increase testing, we were able to almost double the number of tests and the number of positive case findings in those areas.” 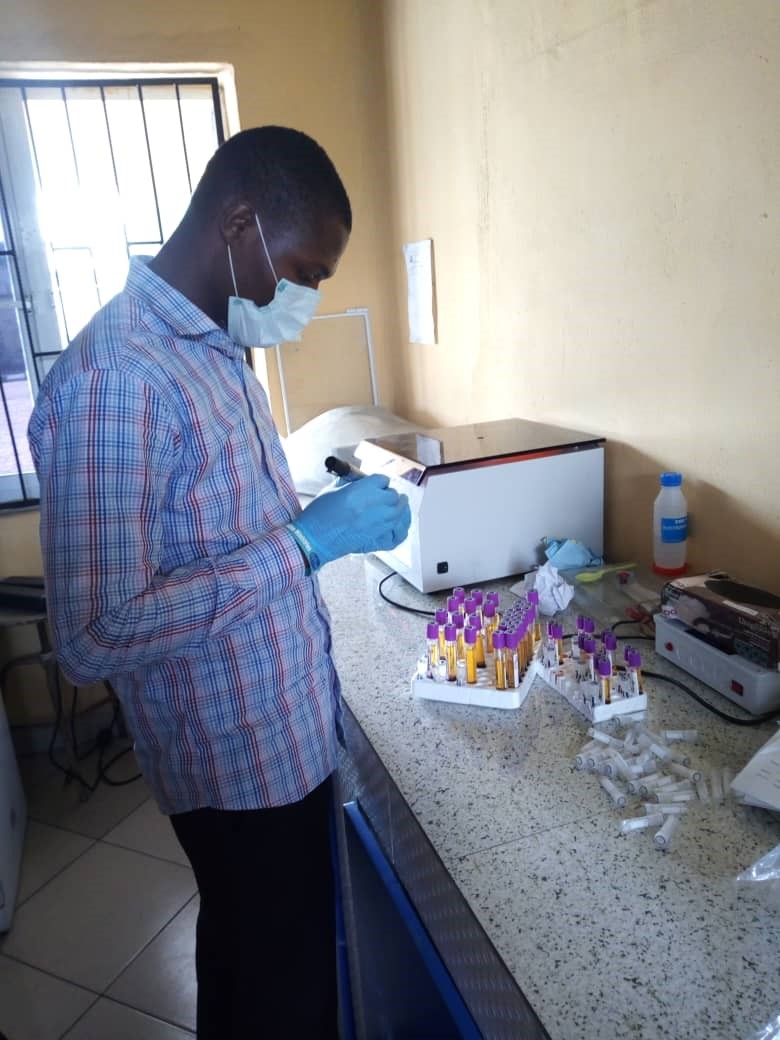 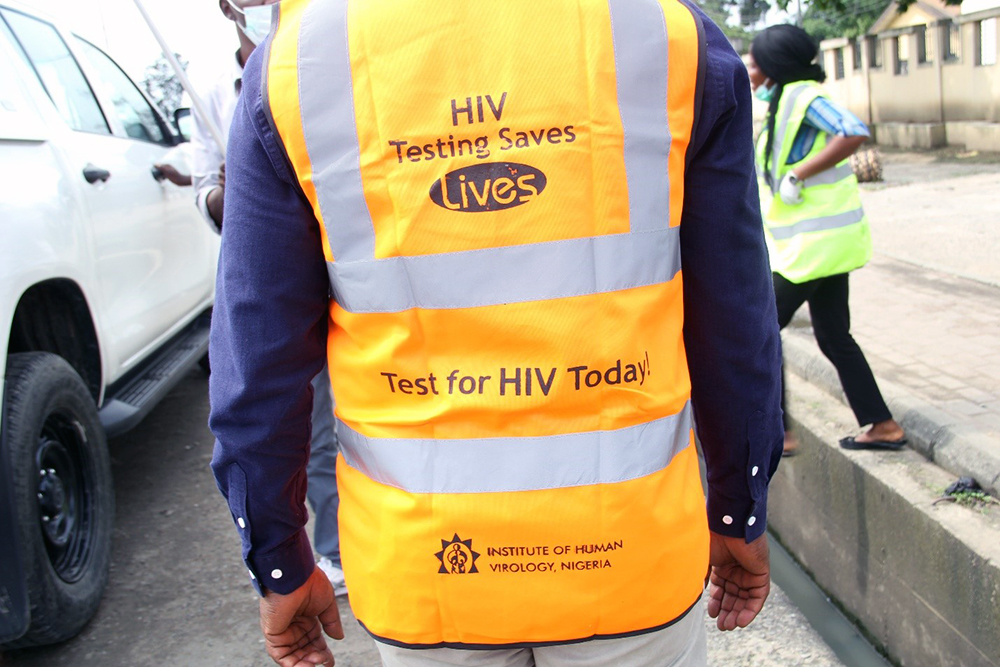 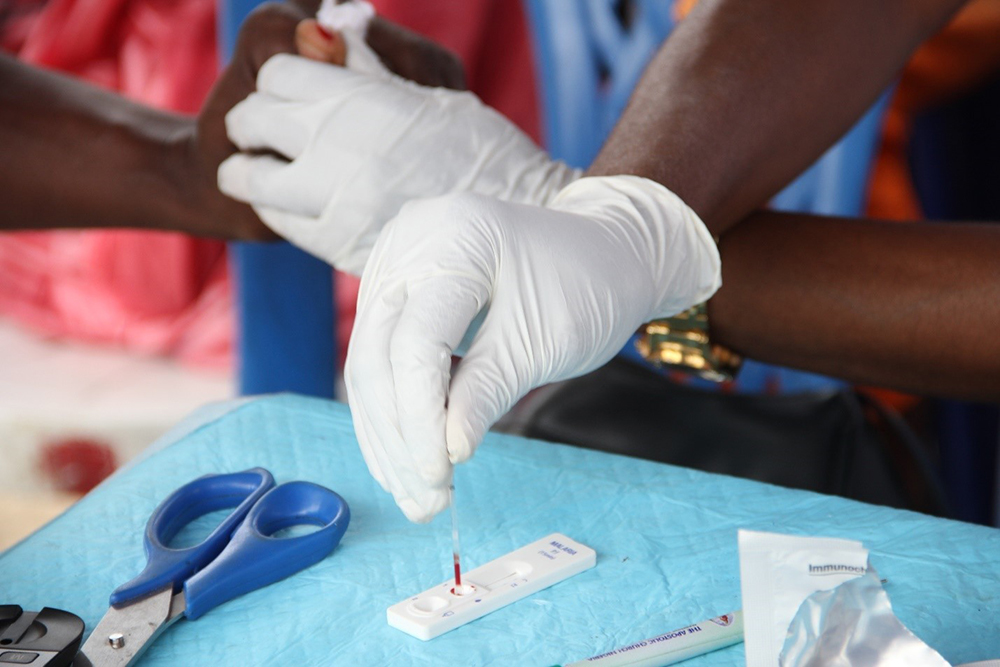 A client gets tested for HIV at a local community center in Nigeria. After testing, each patient is counseled and, when necessary, linked immediately to care.

According to Dr. Emilio Dirlikov, lead author of the study and Acting HIV Program Director for CDC-Nigeria in early 2021, engagement with local communities – particularly community health care workers – was another critical linchpin.

CDC and partners both trained and were guided by local community health workers who helped lead the day-to-day program operations. This approach, says Dr. Dirlikov, allowed the effort to “get real data, reach real people, and achieve real results.” In several states, for example, community health workers were able to engage first with community leaders and impress upon them the critical importance of HIV testing as well as other health screenings that were integrated into the Surge outreach efforts. The leaders, in turn, would send town criers throughout the community, alerting members to the screenings offered by CDC and the Ministry of Health. Consequently, the program was able to engage large crowds of community members to come forward for HIV testing and other health screenings as well.

Davis Akuye is one of the community health workers who helped support the 18-month Nigeria HIV treatment Surge. A resident of Rivers state, he has seen first-hand the devastation that HIV has brought to his community. “Part of my reason for doing this work is because I have seen people becoming ill from this virus, and I have seen the deaths and those that are left behind. For me, this is a way that I can give back, that I can help restore healing to my own community,” he said.

As part of his job, Davis goes door to door, paying daily visits to community members in their homes, providing information, HIV testing, and when necessary linking his fellow community members to HIV treatment services provided at the local health facilities. He recalls one particular incident where he was able to make a powerful impact.

“There was one client whose girlfriend tested positive for HIV,” he recalls. “He was very upset and very afraid to get tested because he thought he had also contracted the virus,” he said. “Because we are from the same community, with the same language and the same understandings, I could help him understand the importance of getting tested.” Ultimately the client learned he was HIV negative and at Davis’ urging began taking pre-exposure prophylaxis, or PrEP, to protect himself from the virus. At the same time, the client’s girlfriend was initiated on HIV treatment. “Today, they are a happy, healthy married couple,” he says proudly. 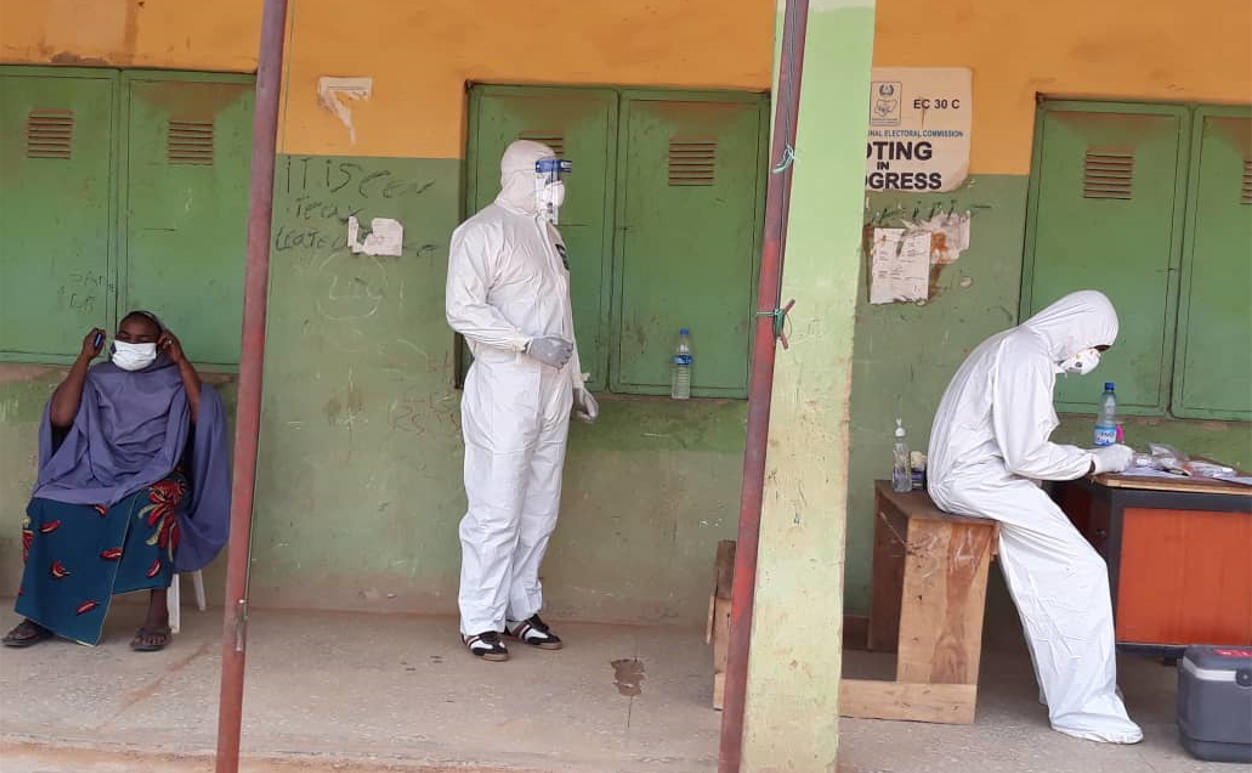 In communities across Nigeria, CDC and partners integrated HIV testing outreach into the Ministry of Health’s COVID testing efforts as part of the HIV treatment Surge. In this picture, health care workers collect COVID-19 samples at a local community site where both occurred.

Looking to the future

Ultimately, the Nigerian ART surge initiated more than 450,00 additional individuals on HIV treatment between April 2019 and March 2021. Study authors say this is a particularly herculean feat, considering the country had initiated a total of 450,000 people on ART in the previous 17 years. What’s more, efficiencies in the Surge effort saw these incredible gains with little or no changes to the overall budget.

Program leaders say, however, there is still more work to be done. In Nigeria and other places throughout the world, many people remain unaware of their HIV status. Improvements in HIV testing strategies, especially among those at high risk of infection, remain critical. Linking people with HIV rapidly to treatment, retaining them on HIV treatment, and helping them sustain viral suppression are also top priorities to reduce HIV transmission and HIV-related deaths – and are core to the UNAIDS’ global goals to achieve HIV epidemic control world-wide.

As the program continues to expand across Nigeria, more and more evidence points to its potential to be replicated in other settings.

According to CDC HIV Care and Treatment Branch Chief, Dr. Tedd Ellerbrock, the Nigeria HIV treatment Surge and its successes can serve as a model for other countries around the world battling HIV epidemics – as well as other health conditions. “Very few of us in medicine and public health have the opportunity to do what we’ve done in Nigeria. The PEPFAR program in Nigeria has helped over 450,000 people access lifesaving therapy. Try and put your arms around that. We’ve made an enormous difference in the lives of 450,000 souls,” said Ellerbrock.

Dirlikov adds that the novel approach could also generate momentum domestically. Here in the U.S., he points out, approximately 1.2 million people have been diagnosed with HIV and nearly 40,000 people become newly diagnosed each year.

But for many like Dr. Odafe, the success of the Surge hits much closer to home:

“The truth is I am extremely proud of what has happened,” he said. “We have saved a lot of lives. I can sleep better at night. I see the ending of the HIV epidemic in Nigeria. It is very close. And that brings me a lot of satisfaction professionally, but as a Nigerian, this is something also that is personal for me.”